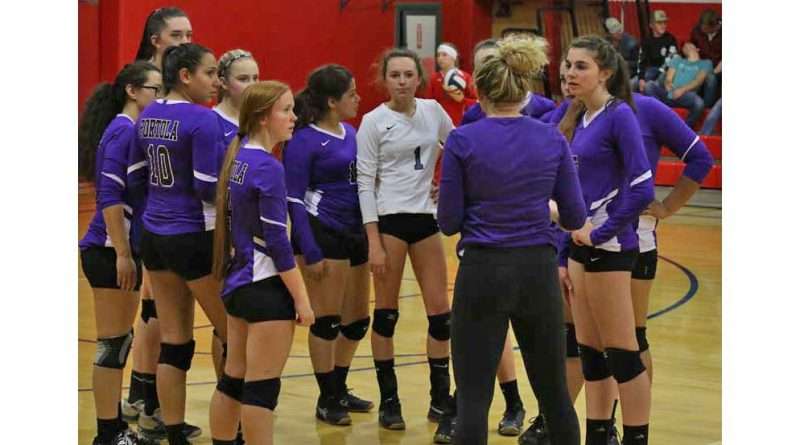 Portola Tigers listen to their coach Emily Compton’s ideas on how to get the best of the Trojans during a quick time out during the Oct. 3 rivalry match. Photos by Mari Erin Roth
Sports
October 14, 2017October 13, 2017 Mari Erin Roth, Sports Editor

With a rowdy crowd in the bleachers and high energy players on the court, the match between the QHS and PHS volleyball teams was worth every minute spent watching. The Trojans won the match 3-1, but if you didn’t know the score, it would be difficult to tell which team won.

The rivalry between the two schools seems to bring out the very best of each team. Extra effort is displayed with every point and no player on the court or fan in the stands seemed to surrender until the final point was made. It is a terrific show of athletic skills and reaching for the best performance.

Junior Autum Sherman served the most aces with four. Cheyanne Morrison and Rachel Abramson both aced three. Abramson really got in handling the ball with 12 digs. Lillian White had 12 assists and Sherman had eight.

Abramson led Trojan serve receptions with 28, Morrison with 21 and Hall with 20.

The Trojans are 14-4-1 overall and 2-0 for the league. It looks like all those extra games have been paying off. The girls’ games remaining are at Maxwell, Tuesday, Oct. 17; away at Portola, Thursday, Oct. 19; and the last game scheduled is against Biggs in Quincy on Tuesday, Oct. 24, at 5:30 p.m.