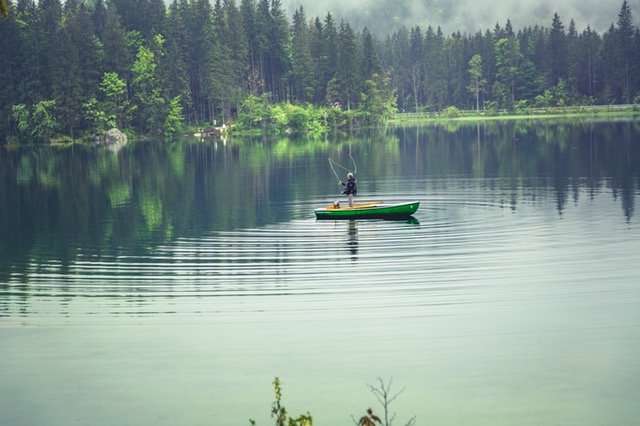 Mid June to early July brings some of the most exciting fishing of the year for fly fishers. Why all the excitement? It is the “hex hatch.”

The Hexagenia mayfly, aka “the hex,” is the largest mayfly in the western U.S. Its size alone would be enough to make a hungry trout throw caution to the wind, but what really sets these aquatic insects apart is the shear numbers that hatch all at one time. This appears to be a survival mechanism that is seen in a number of species. Because of the large numbers, many individuals are “lost” to feed other critters (or fish and diving birds in this case), but because of the large numbers, there are enough individuals that survive to ensure the continuation of the species.

Hexagenia are primarily lake dwellers. They seek out muddy lake bottoms at depths of just a few feet up to about 15 feet to deposit their eggs. They hatch late in the evening and often hatch in such large numbers that they create a feeding frenzy.

As the evening progresses, the number of hatching mayflies increases dramatically. When the hatch is in full swing, you will find yourself surrounded by hatching insects, large fish actively feeding on the surface, making splashy rises as they grab mayflies off the surface of the water, sometimes close enough to startle you and even hit you with a good spray of water. It can be a bit unnerving as you try to keep your cool and stay focused.

After emerging, adult mayflies will head for the lakeside vegetation. They will molt one more time and become sexually mature adults. The mature adults can be identified by their clear wings rather than the cloudy yellow wings of the newly hatched adults. After molting and mating, the females will head back to the lake to lay their eggs. This process of laying eggs takes some time and the females sitting on the surface of the water are once again vulnerable to feeding birds and fish.

The tiny eggs sink to the bottom where they sit until the nymphs hatch and burrow into the mud where they spend the next one or two years. During this time, they will leave their u-shaped burrows to feed and molt up to thirty times as they grown into much larger fully formed nymphs. Come late June and early July these nymphs will emerge from their muddy home, rise to the surface, and start the cycle over again.

Plumas County is lucky to have several lakes with good hex populations. Lake Almanor is most well known for its excellent hex hatch. But “well known” is not my favorite attribute in a fishery. At its peak, which is right around the July 4 holiday weekend, an evening on the west shore of Almanor where the hex are most numerous will attract dozens of anglers in float tubes, kayaks, smaller fishing boats and even larger ski boats and pontoon boats. It can take on a sort of party atmosphere. Fortunately, there is Butt Lake, which is just a few miles away. Butt has a good hex hatch, mostly down toward the dam and offers the sort of solitude and relaxed atmosphere I, like many fly anglers, prefer.

Although I have never fished the hex hatch at Antelope, I understand it’s pretty decent. And in just the past few years, the Hexagenia have taken hold in Lake Davis, adding another excellent food source and fishing opportunity to a lake already well known to fly anglers.

But the hex hatch isn’t just for fly anglers. Knowing where the hex have been active the night before is a good clue for trollers and bank anglers looking for a good concentration of fish. And while I have not tried it, I hear that crickets make for a passable hex nymph imitation.

I like to be on the water early before the actual hatch begins. I will fish a hex nymph deep, lifting it toward the surface occasionally. Once the trout have keyed in on the hex as a food source, this technique can actually work all day long. It also continues to work once the hatch has begun, but I find the dry fly fishing  much more exciting so I will switch to an emerger or  cripple pattern.

The method may work well, but most anglers do not wish to squander the best dry fly opportunity of the year by tossing nymphs into the darkness!

Lake Almanor is nearly full and in great shape. Trollers are picking up fish in both basins. The fish are scattered so be prepared to put in some time.

Rec 2 to Bailey Creek continues to be the hottest spot. Hard to say for sure if that is because the fishing is better there or that is just where the most boats are heading.

At the risk of sounding repetitious, try fast action lures like Speedy Shiners and Needlefish with a touch of scent. Start shallow and drop your gear down deeper as the sun gets on the water. Night crawlers about 18 to 24 inches behind a dodger are also very effective. I especially like this set up later in the morning.

Fly anglers are starting to see a few hex mayflies, but we are still a week or two early for the peak of the hatch. There are still plenty of midges on the lake and Tom Mauymonier of the Lake Almanor Fly Fishing Company in Chester reports some fish are on callibateis mayflies at the mouth of the Feather River.

Depending on whom I have talked to, the powerhouse is either running or not running. I guess this means it just depends on when you happen to be there. But with tons of water still pouring into Almanor, I would expect the powerhouse to be running more often than not.

Why does the powerhouse matter? When the powerhouse is running it is sort of like the buffet is open. That powerhouse delivers lots of pond smelt from Almanor. After the ride through the pipeline and powerhouse, the few smelt that survive are not in great shape to evade the hungry trout.

Butt Lake is like Almanor’s little brother and it fishes pretty much the same way. Shore anglers will do best by the powerhouse. Trollers will find fish scattered through the lake. Fly anglers will find a few hex mayflies down towards the dam.

With Lake Davis being 13 feet higher than last fall, it has been very tough locating fish in the usual spots. The behavior of the resident rainbows has been very odd according to long time guide Jon Baiocchi. Jon reports there are large numbers of fish holding in the  deeper water in the main channel of Grizzly Creek by the big island. These fish are out of reach to fly anglers, but present a nice opportunity for trollers.

Fishing has been slow lately, but starting to improves as the damsel fly hatch increases.

Coot Bay has been one of the more productive areas. Fly anglers are picking up fish  using red copper johns or bead head pheasant tail nymph under indicator.

Frenchman’s Lake has been fishing a bit better than its neighbor Lake Davis. Lake Davis is full to the brim and still spilling over. Fish are scattered and in all levels of the water column. Insect hatches are sparse, but trollers and bait anglers are finding fish.

Stripping buggers and wiggle tails with a sink tip or an intermediate line have been effective for fly anglers. Power bait is the bait of choice for shore anglers. Inflated nightcrawlers also work well. The first cove to the west of the spillway is a good location for bait anglers.

Trollers are doing well trolling Speedy Shiners and Dick Nite spoons in 15 to 20 feet of water. Red dot frog and fire tiger are good color choices. (I sometimes wonder if the people who develop and name the color patterns for fishing lures are the same people who produced the psychedelic light shows for rock concerts a few decades ago.)

The lake level is higher than it has been in recent years. That is a very good sign for the fishery in the long run, but for now, the fish are widely scattered and fishing has started out a little slow.

Trout will become a bit more concentrated and easier to locate as the water warms, insect hatches increase, and tui chub become more active, but for now, be prepared to cover lots of water.

Whether fly-fishing or trolling, tui chub imitations are key for catching Eagle Lake trout. If you are in doubt about what a tui chub imitation looks like go with orange or burnt orange minnow imitations. Needlefish  and Jay Fair Trolling Flies, which were designed specifically for Eagle Lake, are very effective. Leeches are also an important food source. Wolly bugger patterns in dark green and brown are effective imitations and nightcrawlers are also very effective.

There are reports of a fair amount of algae in the water. That is hampering shore fishing and makes it important for trollers to clean their lines frequently.

The Middle Fork of the Feather River is dropping a bit and getting very fishable.

Dan McDonald of Camp Layman reports that anglers are having success drifting worms a foot or two under a splitshot in the deeper holes below rapids. The fish are pretty nice size, too. Most are in the 8- to 10-inch range with some up to 14 inches. Panther Martins and similar lures are also catching a few fish. People willing to spend a couple hours at it are catching their limit.

No matter which stream you fish, the key is using just enough split shot to get down to the bottom, but not so much that you get hung up.