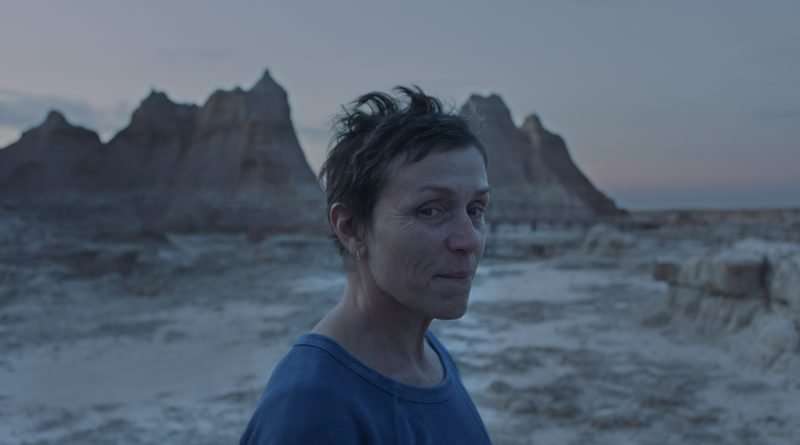 For re-opening month at the Town Hall Theatre we are bringing you films with acclaim and awards, movies that needs to be seen on a BIG screen, and of course the latest Disney animated family film.

We are pleased to re-open the Town Hall Theatre with the winner of the 2021 Golden Globes and Academy Awards for Best Picture, Director Chloé Zhao (the first woman Asian woman to win) and Best Actress Frances McDormand.

Based on the 2017 nonfiction book Nomadland: Surviving American in the 21st Century, the film follows Fern (Frances McDormand), a woman in her sixties who after losing everything in the economic collapse of a company town in rural Nevada, packs her van and sets off on the road exploring a life outside of conventional society as a modern-day nomad. This third feature film from director Chloé Zhao, features real nomads Linda May, Swankie and Bob Wells as Fern’s mentors and comrades in her exploration through the vast landscape of the American West as she gains a new understanding of the meaning of community.

Long ago, in the fantasy world of Kumandra, humans and dragons lived together in harmony. But when an evil force threatened the land, the dragons sacrificed themselves to save humanity. Now, 500 years later, that same evil has returned and it’s up to a lone warrior, Raya, to track down the legendary last dragon to restore the fractured land and its divided people. However, along her journey, she’ll learn that it’ll take more than a dragon to save the world—it’s going to take trust and teamwork as well. This Walt Disney Animation Studios animated film features the voices of Kelly Marie Tran as Raya and Awkwafina as the last dragon Sisu.

In a time when monsters walk the Earth, humanity’s fight for its future sets Godzilla and Kong on a collision course that will see the two most powerful forces of nature on the planet collide in a spectacular battle for the ages. As Monarch embarks on a perilous mission into uncharted terrain and unearths clues to the Titans’ origins, a human conspiracy threatens to wipe the creatures, both good and bad, from the face of the earth forever.

Tensions and temperatures rise over the course of an afternoon recording session in 1927 Chicago as a band of musicians await trailblazing performer, the legendary “Mother of the Blues,” Ma Rainey. Late to the session, the fearless, fiery Ma engages in a battle of wills with her white manager and producer over control of her music. As the band waits in the studio’s claustrophobic rehearsal room, ambitious cornet player Levee— who has an eye for Ma’s girlfriend and is determined to stake his own claim on the music industry— spurs his fellow musicians into an eruption of stories revealing truths that will forever change the course of their lives.

Please note that COVID protocols require patrons to wear face masks at all times when not actively eating concessions as well as spacing in lines and theatre seating. We are also required a 50 percent capacity (100 persons). When that number is reached, the box office will close. To ensure that you have a seat for a specific date you may purchase presale tickets ONLINE ONLY on the Town Hall Theatre page at plumasarts.org https://www.plumasarts.org/town-hall-theatre.html

Film-goers are encouraged to arrive at the theatre between a half hour to no less than 15 minutes before show time to accommodate the time required to move through box office, entry and concession lines and ensure that they are ushered to their seats before the movie starts.

Credit card sales will be now accepted at the box office and concessions stand. We are pleased to note that we are working with the Plumas County based Merchants XL processing company for credit card sales. Their service employs a 4 percent convenience fee that is charged to the credit card user rather than the business. To avoid this fee, the Town Hall Theatre still gladly accepts cash transactions.

To keep informed about upcoming Town Hall Theatre news, subscribe to our free monthly Plumas Arts emails https://www.plumasarts.org/contact-us.html , like us on our Town Hall Theatre facebook page or click our ad on Plumas News online.

For any questions about the Town Hall Theatre please email [email protected] or call Plumas Arts at 530-283-3402.