The Portola City Council devoted part of its April 28 agenda to discussing trails and their importance for local recreation, tourism and economic development.

Greg Williams, director of Sierra Buttes Trail Stewardship (SBTS), joined the meeting via Zoom to give a special presentation on where the group is at after flexing to meet the changes imposed by the pandemic.

In 2020, SBTS maintained 148 miles of trail in Plumas and Tahoe national forests, with 10.5 miles built and 69 miles considered “shovel ready” now that the needed NEPA and CEQA reviews are complete.

Since the group was established in 2003, they have completed 121 trail projects, built 102 miles of new trail, maintained 1,238 miles of trail to specification, and logged 100,009 hours of volunteer labor hours. There were 336 total volunteers in 2020, and 52 volunteer workdays. This is compared to the 1,383 volunteers that participate in 2019.

The professional trail crew scaled back from 10 people in 2019 to eight people in 2020, and high school students were unable to join the annual summer student trail crew, which employed 14 students in 2019.

Williams discussed the current project that Sierra Buttes Trail Stewardship is focusing on, the Connected Communities plan, which is funded through the Sierra Nevada Conservancy using California Proposition 68 funds.

This plan would utilize the trails as a tool for economic development, with annual consumer spending showing outdoor recreation as a powerful economic sector.

“The outdoor recreation industry is creating 7.6 million jobs nationally,” Williams said during a slide presentation being shown to the room. 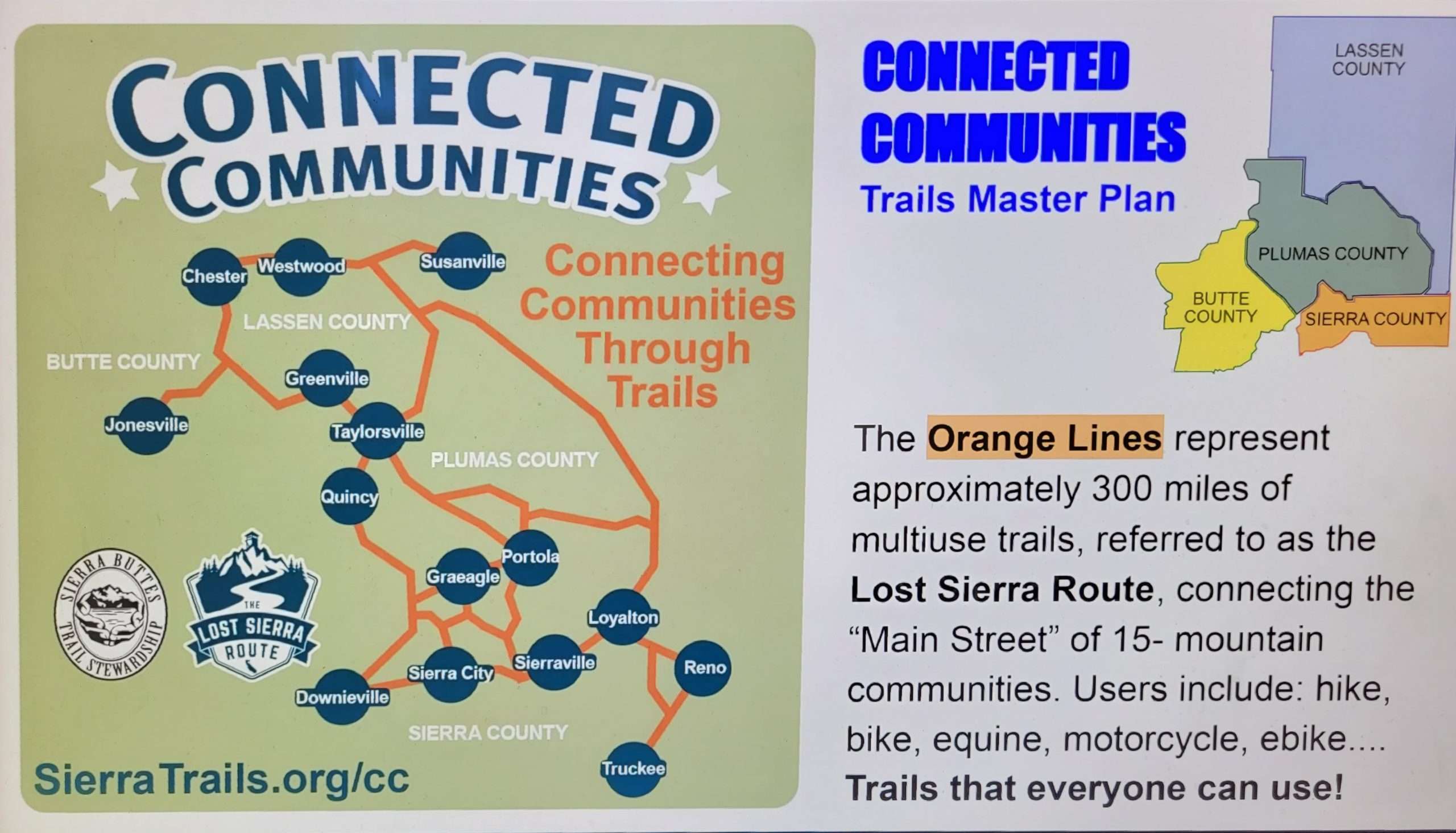 Williams explained that the Connected Communities Trails master plan will showcase the headwaters of the Yuba and Feather Rivers, which are critical watersheds delivering more than 65 percent of California’s clean drinking water.

The trails will also create a learning landscape for outdoor and environmental education programs to highlight the National Forest and the importance of shared stewardship.

“This will also bring visitors into towns for services and accommodations and allow residents to easily access the surrounding public lands without the use of a vehicle via a ‘Main Street trailhead,’” Williams explained. He also expressed that timing is critical for this project.

“The Plumas, Lassen, and Tahoe forests are in the process of updating the Forest Land and Resource Management plan, all of which are nearly 30 years old and have no mention of trails or recreation as a type of use or resource,” Williams said.

Williams explained that the stewardship had been soliciting input from all communities that will be linked by the project through the past year, and that feedback has been helpful and detailed in many cases.

“In some regards, it worked out better that we didn’t have big presentations because of the pandemic,” Williams said. “More people that maybe normally wouldn’t have spoken up were able to fill out a paper survey booklet or do an online survey and really articulate some good points.”

There have been more than 1,200 surveys taken to date. More information can be found at www.sierratrails.org/cc.

The results of the surveys have been highly enthusiastic. Of 207 business owners surveyed, 87 percent felt that Mainstreet Trailheads would attract more business, and half of them wrote in specific location recommendations.

Williams went over the costs and funding as they stand currently, with philanthropy and partnership being a major income source, as well as thanking the many who are rooting for the project.

Cooley gave a big thank you to Williams for the coordination and leadership being expressed on this project, and Williams smiled and said, “This isn’t going to solve all the problems, but having Portola on the map still as a recreation destination is really important.”

SBTS hasn’t been able to hold its annual Gravel Grinder Lost and Found Bike Race for the past two years, which led to a loss in momentum in addition to about 1.2 million gross loss out of a two-million-dollar budget to the stewardship, and event staff has been laid off, but Williams hopes to generate momentum moving forward.

“I’m a 100 percent behind you,” Powers said. “It’s as enjoyable building trails as it is riding it for me, and I’m looking forward to it.”