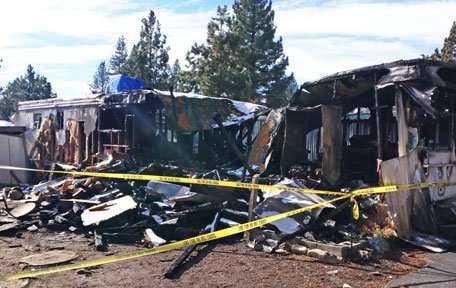 Eastern Plumas Fire Chief Bob Frank was first on scene with his crew at approximately 7:30 p.m., and discovered that No. 23, owned by residents Ophelia Cardenas and Sergio Velasco, was ablaze in a snowstorm, with the intensity of the flames affecting the home in space No. 22 next door.

Frank said the blaze had begun due to a burning log rolling out of the woodstove at the Cardenas-Velasco residence. The burning wood rolled against a cardboard box and the residence then caught flame in earnest.

Trails West manager Julia Smith spoke about the fire, saying, “The experience was completely surreal, watching the snow on the raging flames and the fire crews working so hard to contain it. I had left the park to run an errand directly before the fire started, and when I came back in less than 20 minutes, it was out of control. It is shocking just how quickly this happened.”

Smith commented that all fire crews remained on site until the fire had been completely contained, around 11:30 p.m.

“The crews were amazing,” Smith continued. “They were very safe, and we all were very impressed. Needless to say, none of us really slept the rest of the evening, but the sun came up the next morning over an eerie layer of snow over the remains of homes No. 22 and No. 23. Both mobile homes have been completely destroyed.”

Julia and Corey Smith offered a temporary vacant home on site to the resident of No. 22, who wishes to retain her privacy. The resident, according to Smith, found a home to go to in town shortly after the fire.

“Cardenas and Velasco had friends that took them in, so they are cared for,” Smith said. “Initially, Cardenas stayed at a vacant home on site that we offered, and we made sure that she had blankets and food.

“After the fire occurred, I called the Portola Family Resource Center in Portola to try and get some aid together for those affected, and the community really has come together. Nifty Thrifty as well as the EPRFD Firehouse Thrift store each offered vouchers to those affected, $100 per person.”

Also, according to Smith, Frank personally offered to help with the site cleanup of both mobile homes with his own equipment and on his own time.

“We are so grateful for the community,” Smith said. “So many people have pitched in to help their neighbors, and we are so grateful. The fire crews that responded were great; you can tell that they are doing their job for the people of the community. It brings a lot of hope to see it on the heels of an event like this.”