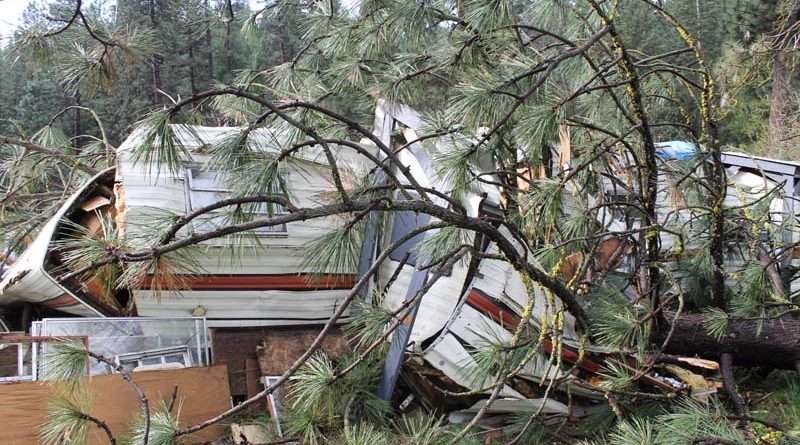 “It was like a bomb going off,” explained the owner of this travel trailer. Early Wednesday morning, March 29, a tree from a neighboring property fell, wiping out the travel trailer and a car. This is the second trailer destroyed by falling trees due to wet soil since a series of storms began last February. The other trailer was two spaces down from McGee’s space. Photo by Victoria Metcalf
News
April 7, 2017April 4, 2017 Victoria Metcalf, Staff Writer It was a rude awakening. At approximately 5 a.m., Wednesday, March 29, when a Quincy area resident was awakened by the crash of a huge pine tree as it hit the travel trailer where he and his girlfriend lived.

“It was the worst experience I’ve ever had,” said Rick McGee, 58.

“I was kind of asleep,” he said when he heard crashing noises and then the sound of breaking glass.

It was then that he began to realize that something had destroyed more than half of his small travel trailer where it was parked at Evergreen Trailer Park, west of Quincy.

Ritchard Dewitt, McGee’s girlfriend’s caregiver, was the first person to arrive. McGee explained that both he and Sydney Mclean, 68, are on disability. Mclean receives regular care due to a heart attack she had last summer. Dewitt lives close by.

The couple happened to be sleeping in the opposite end of the travel trailer at the time the tree fell on it. Otherwise, McGee said he was certain that they wouldn’t have survived.

He said the fire department volunteers were also great. One of them went back inside to retrieve his boots.

McGee said they lost nearly everything — their home, TV, personal belongings and clothing. All of their medications were also inside, housed in the area that was destroyed.

Besides McGee and Mclean, their seven-year-old Chihuahua Scooby and another visiting dog were unharmed. That dog’s owner came to claim him.

Later in the morning, McGee said they went to Plumas Crisis Intervention and Resource Center. The program agreed to put them up in a motel for a few nights. He said he wasn’t sure what they would do for a place to live.

“You can’t imagine the noise,” McGee said. “It was like a bomb or something going off. It was very traumatic.”

For those who would like to provide funding or items to the couple, McGee can be reached at 616-0753.

One thought on “Tree demolishes trailer”