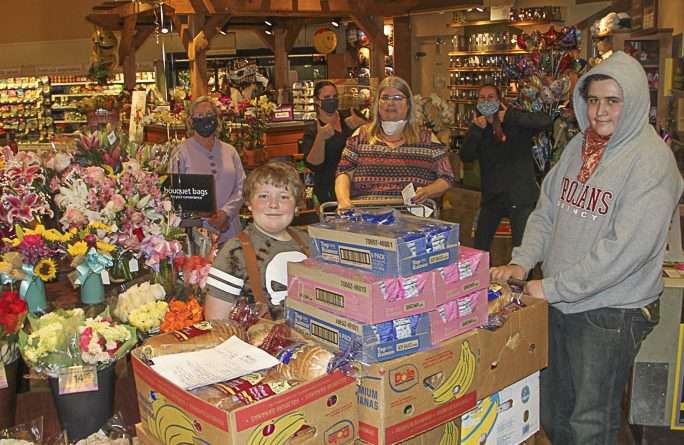 Floating toward the ceiling of the Quincy Safeway on a late May afternoon, a bright Mylar balloon read, “Go Change the World!” It seemed to fit the occasion as Skylar Dillard, 9, and his brother Tysen McGirr, 14, stood near the colorful floral arrangements, watching in near disbelief at the size of the receipts ticking out of the customer service desk cash register.

“Wow, that’s a lot of food that we don’t have to pay for,” said Skylar who attends Plumas Charter School.

‘Kids Helping Kids’ for CAN

The Quincy brothers had gathered over 9,000 Safeway Monopoly game tickets since February in the grocery store’s popular sweepstakes. Quick to let their interviewer know they had help from many Plumas County shoppers, friends, family and generous strangers from out of state, the boys said everything was going to support their 2020 “Kids Helping Kids” food bank donation campaign.

This is the second time the boys have undertaken their hefty volunteer project and, not surprisingly, they’ve done it again and gone even bigger this year.

Casting aside any prize tickets for the actual game, which they and their family do not play, Tysen and Skylar redeemed enough winning coupons for more than 350 free food items worth $800, plus an additional $40 in store-cash coupons to purchase other necessities, all for donation to Quincy’s Community Action Network (CAN) food bank on Lawrence Street.

That’s more than triple the success of their 2019 effort when the young fellows launched the volunteer project out of concern that local families might not have enough food for their children. The boys collected about 2,400 tickets last year and redeemed the free food item coupons for $150 worth of goods that they donated to CAN.

Tysen, a student at Quincy Junior-Senior High, confirmed they’d spent many weekend hours opening game pieces this spring. And it wasn’t quite over yet.

Just before Memorial Day weekend, after their big expedition to Safeway, a slew of new game pieces arrived in the mail, mostly for free loaves of bread.

So the boys and their grandmother, Barbara Gonzales of Meadow Valley, redeemed the extra tickets and delivered those additional foodstuffs to another vital service provider, the Plumas Crisis and Intervention Resource Center on Main Street downtown.

The food had been gathered up ahead of time so the family wouldn’t have to go through all the aisles themselves. At the register and properly geared up with health safety masks, Store Director Meagan Bray rang up the boys’ winning game pieces while Safeway team member Kayle Englund kept her supplied with a steady stream of their redemption coupons.

“This will help CAN serve at least 50 families, which is about 150 individuals,” Kitty Gay said, watching the boys submit their game pieces. She stood in a socially distant spot six feet away, wearing her protective mask near Safeway’s lily bouquets and sunflowers.

Gay oversees the CAN food bank operation in Quincy where they serve 1,000 to 1,500 people a month “in various ways,” she explained.

Gay thanked Skylar and Tysen, acknowledging their volunteer project provides direct assistance to the community’s food bank and is another reflection of how generous Plumas County folks are.

Even the COVID virus didn’t hold them up

Safeway reports there are 2,200 grocery stores in its company nationwide that distribute millions of Monopoly game pieces each spring. The contest typically runs about 90 days, from the beginning of February to the beginning of May.

This year, the sweepstakes coincided with the advent of the COVID-19 novel coronavirus pandemic and subsequent stay-at-home safety directives. To say it complicated the “Kids Helping Kids” effort would be an understatement.

But Tysen and Skylar kept working on their project every chance they got and at the end of the campaign, watching them submit the game pieces for free food items to benefit their own community left no doubt that the brothers’ generosity and volunteerism is greatly appreciated.

So many people to thank

Both boys thanked Safeway for sponsoring the sweepstakes and the Quincy team for making the food bank campaign a project they really enjoy volunteering on.

Tysen and Skylar also thanked their families, a bunch of friends and neighbors, too, for collecting game pieces to make the food bank benefit a measurable achievement.

This year, a significant number of the donated Monopoly tickets came from throughout Plumas County and even by mail from as far away as Idaho, North and South Dakota, Oregon, San Francisco, Washington and Wisconsin.

Grandma Jane’s bakery on Main Street in Quincy collected a lot and other helpers did, too. Many people from all over the county — especially thoughtful Safeway customers — gladly dropped off their tickets or mailed them to the family.

Skylar and Tysen had special thanks for their two grandmothers, Barbara Gonzales and Gina McGirr, the two ladies who have been indispensable to the success of the volunteer campaign and got them through a very tough patch in late 2019 when they were planning their big effort for 2020.

The family endured a painful loss last November when 9-year-old Tony Allen Lawson McGirr of Quincy died unexpectedly. Tony had planned to join his brothers on the food bank project.

Acknowledging that loss, Gonzales, who helps out on logistics and coordinates with Safeway for them, looked at her grandsons with kind affection.

“Considering your brother Tony was going to be part of it this year, and we were also under quarantine the whole time, I think you boys did an amazing job,” their grandmother said.

The brothers originally came up with the idea because they noticed people casually tossing away game pieces, unopened. Skylar wondered at the time, didn’t people know there were coupons for free food in those tickets?

The notion that local families and kids like themselves sometimes don’t have enough to eat spurred the boys to create the volunteer effort using the free food item game pieces that are a welcome part of the sweepstakes.

The project caught on immediately last year and really grew in 2020. In fact, a group of youngsters in Washington State are so taken with Tysen and Skylar’s success that they have copied the idea and launched their own chapter of “Kids Helping Kids” to duplicate the food donation campaign.

Great job, guys! We’ll all be saving our game pieces for you next spring.