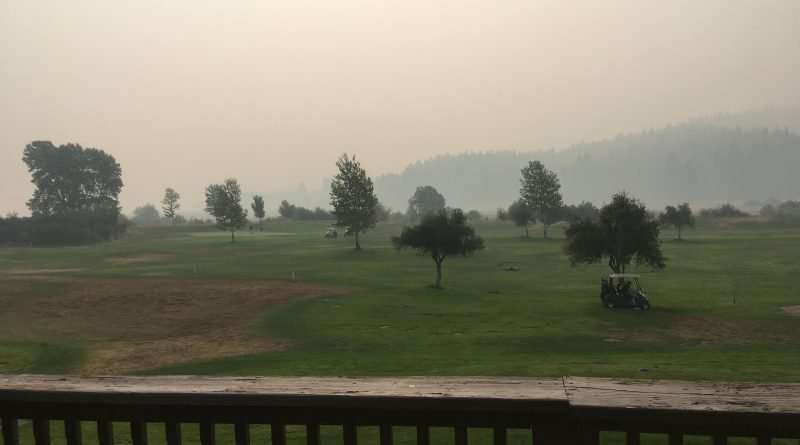 A few hearty golfers braved the smoke today at the Mt. Huff course and brought a little joy on this sad anniversary. Photo by Meg Upton
News
September 4, 2021September 8, 2021 Editor

Wind shift and we are back to AQI of 170—and we are so conditioned to this now that I assume my neighbors, not unlike me, were probably thinking to themselves, well at least it’s under 200.

That’s where we are: grateful for the scraps of hope and wishful thinking.

This portion of Indian Valley still has houses and many of us are on wells and septic and of course, PGE. We can “live” here and if we don’t drive over the grade and see Greenville. We can almost pretend like things are normal. And as long as we don’t drive to Quincy and pass the tree slaughter along the highway, as long as we don’t see Indian Falls…well, let’s just say there’s a good deal of survivor guilt going on.

It’s a harsh lesson in realizing that a home is more than your house. It’s your neighbor’s house. It’s the post office and the grocery store. It’s waving hello. It’s being surrounded by green hills and green meadow. We have museum pieces of forest now. Picture book wildlife. Miracle specks of greenery.

There are groups on facebook about rebuilding Greenville and there’s symbols of hope and feel good stories. Gift cards from various places. Paradise High School kids giving to Greenville High School kids. Rick Erickson’s Boat and RV Storage in Crescent Mills along with the Crescent Hotel serving as sites for evacuees and displaced Indian Valley residents to pick up free household items, toiletries and furniture. As I’m talking to Erickson a woman in a giant fifth wheel stops to deliver a couch and other furniture a displaced Greenville family might need. A man and his young daughter stop who drove this morning up from Sacramento and begin to empty their Subaru of bags of donations. Mary Shero of Mary’s German Grill—serving up a free community meal of a chicken and rice soup in front of Crescent Country with her sons. Hope and humanity.

But Crescent Country has a ‘for sale’ sign on it. Gigi’s Market was empty midmorning on a Saturday. Dave Humphrey’s Crescent Tow is rumored for sale though there aren’t signs up. Older Greenville business owners know how much of a struggle a business in Greenville was before the fire. Sterling Sage closed December 2020. These champion business owners of Greenville seem to all be in their 70s or late 60s. Do you start over at that age or do you retire? Do you stay to fight the good fight or do you take that RV you’re living in on the road and see what’s left to see in this climate changing country? Drive through whatever is left not burnt or not flooded, not crumbled down?

I’ve spent the month catching up with the Greenville Diaspora. We were an aging community with so many at the edge of assisted living or mother-in-law units near our kids. We were a community working in Quincy or Chester. Families I know are now renting homes in those two communities with no intention of coming back. Elders I know have cashed in their insurance checks and moved closer to their grandkids. In Chico. Some are in assisted living in Redding. People who had someday in the future plans, declared someday this last month. Gone. Done. Goodbye Indian Valley.

I stopped by the Mt. Huff Golf Course, and as someone who doesn’t like grass or golf, I nearly cried with happiness to see three sets of golfers in their clusters on carts golfing in the thick lung challenging haze in some sort of defiance of the AQI levels. Elisa Rutledge has opened back up. There was a whole lemon pear pie from Lorraine Hanson just ready to slice up. Seeing something normal meant way more than it should have.

I drove to Quincy where the Saturday Artisans were set up at Dame Shirley Plaza. It looked festive as I drove past. I thought about stopping but I’m not good in public over an hour or so.

My daughter and her friend and I meet for breakfast at Patti’s Thunder were it seemed to me that a bulk of former Greenville were breakfasting, each with that tired look that says we don’t have our own working kitchen yet—or I could be projecting. I don’t have a working kitchen yet and I can’t serve my kid my signature weekend crepes where I spread out bowls of fresh berries and freshed whipped cream.

My daughter who has attended Quincy High School, for the last three years will find 20 Greenville kids with her for her senior year. The orientation last Wednesday at QHS had some pretty heavy sighs as Greenville parents stood with their kids in lines getting their fall schedules at a foreign school. Kudos to those who made the decision to paint the “Q” half orange for Greenville and half red for Quincy. Gestures like that mean so much to those of us doing our dazed walks through Quincy, feeling like we need to rest without a place of our own to sit. Every little bit does help.

It’s not just Quincy. In Chester at the Kopper Kettle the other day, everyone’s phones went off for evacuations of Beckwourth/Genesee Road and of the Milford area. All of us trauma worn Plumas County people didn’t even look up at our phones. Only the sole tourist did and asked what it meant. The booth full of locals next to her let her know. The waitress said to me as I paid, isn’t it terrible what happened to Greenville? Greenville: the town that burned. I told her I was from Greenville and she told me her son had lost his house there. Her kid bought a house in Susanville and moved his family there.

That’s how the conversations go these days in this one-month unhappy anniversary.  Some of us feel the scarlet “G” on our lapels and cop to where we’re from. Some of us dodge it and keep quiet. Some of us have cashed out and moved on. And some aren’t tired enough yet to call it a day, a chapter, a decade, a lifetime—they have some strange resilience that leave the rest of us in wonder.