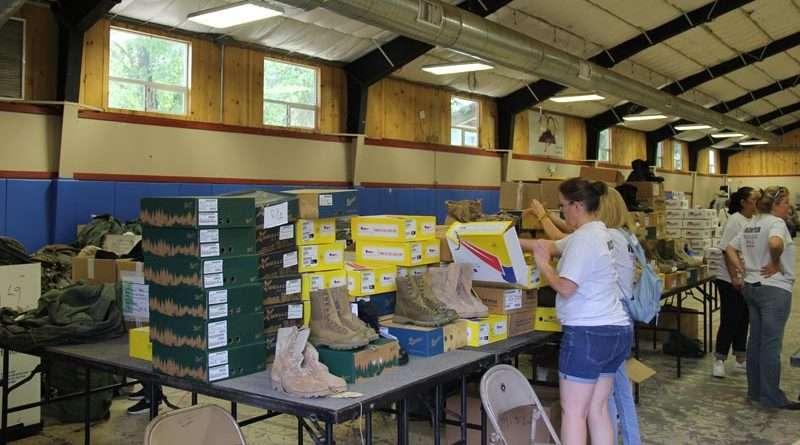 They did it. Founder Ryan Rogers and co-founder Scott Quade of the Plumas County Veterans Collaboration, along with help from volunteer coordinator Ray Lewis, pulled off the second ever Veterans Stand Down in Plumas County on Sept. 7.

Though attendance was not as high as the first year — the Stand Down happening in the midst of the Walker Fire may have been an attendance deterrent — around 200 veterans and their families attended the event.

This year’s guest speaker was Director Lisa Howard from the Reno Veterans Administration. She knows — as does Rogers and Quade — that the number of veterans enrolled with the VA living in Plumas County is nearly high enough for the county to warrant its own clinic.

Sixteen to 17 percent of the county are veterans — but not all have been reached.

“We need all veterans to register in order to get a free standing VA clinic in the county,” said Ryan Rogers.

A clinic, the organizers feel, would go a long way in providing needed services and support. Both Rogers and Quade point to the dramatically high rates of both veteran suicides and rural suicides.

They learned a good deal from putting on the event in 2018 and carried what they learned forward to make the process for enrolling in the VA, as well as eye and dental, as streamlined as they could.

Roughly $150,000 worth of military gear, like camping equipment and boots, was given away. Leftover gear was taken to Reno for a similar event for veterans there.

Eighteen duffle bags were made for veterans who might be homeless. Ten were given to the Sheriff’s Office for jailed veterans and other bags will be dispersed to agencies within Plumas County. Those receiving the survival bags will be referred to the County Veteran Service Office to enroll in possible benefits or aid they might need.

The event, held at the fairgrounds in Quincy, aims to bring Plumas County veterans into the fold — to bring them the awareness of the benefits they might not know they are entitled to and to make the argument that there are enough veterans in this rural northeastern corner of the state to warrant a veteran’s clinic.

“We live in a county, where services are limited for veterans. We only have one full-time Veterans Services Officer. We do not have a VA clinic. Even with the Mission Act, resources for veterans are limited.  I hope veterans who attended utilize the resources of exhibitors,” said Quade.

Quade knows the experience of a veteran down on his luck. He and his family lost their home and nearly all their possessions in the Camp Fire of 2018. The Elks Lodge, the Quincy Veterans of Foreign Wars Post 3825 and the Plumas Crisis Intervention and Resource Center helped him and his family. All were exhibitors.

“I believe our 2019 Veterans Stand Down was successful due to an accumulation of dedicated volunteers, exhibitors who care about veterans, local donations, and dedicated staff who volunteer on their own time to make our events successful,” said Quade.

This year, The Plumas County Veterans Collaboration invited Healing California to work with them to bring free eye exams and dental services to veterans at the stand down.

A total of 31 vision patients were seen at the Stand Down with 26 eye exams and 49 pairs of glasses made onsite with one bifocal referral. Healing California puts the vision service value at $10,530. It’s often difficult for elderly veterans to have transportation to eye appointments and then fill the prescription after. Healing California was able to make glasses at the Stand Down so that the experience was a one-stop shop.

Dental services were an even bigger draw with 40 patients seen at a value Healing California puts at $11,887.40 worth of dental services for veterans. This included 14 cleanings, 21 surgical services, nine restorations and 40 general exams.

Dental and eye exams are often outside the perimeters of basic health insurance plans.

Michael A Nichols, Yuba-Sutter Veterans Stand Down, helped get the gear to give to Plumas County veterans.

The Quincy Elks Lodge #1884 were the primary cooks and food providers for the event with donations from Holiday Market and the Community Assistance Network.

Quincy VFW, Tracy Wixted and Ranchito Motel all donated toward the event.

The Plumas County Veterans Collaborative was started over two years ago by Ryan Rogers after he attended one in Marysville and thought it would be a great idea to bring one to Plumas County. The TPCVC has been holding bimonthly meetings with free dinners to improve veteran outreach.

Both Quade and Rogers day jobs overlap in concern for veterans. Rogers works as the Site Coordinator in Portola for Behavioral Health; Quade works in probation in Quincy.

The presence of full time job commitments and families means the organizers are thin on energy left to put a massive undertaking like this together for next year.

On Sept. 7, organizers pulled nearly a 16-hour day after putting in over 60 hours in the weeks leading up to it.

They might not be able to do it if more volunteers do not come forward to lead the collaboration. Last year they started planning for this event in October. This year they are taking a breather until at least January — and hoping more veterans and their families step up to become part of the process and planning team.