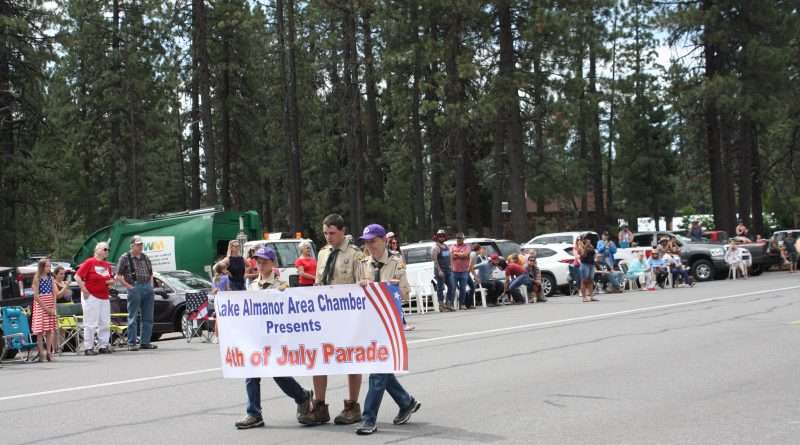 ‘Trustworthy’ is the first point of the Boy Scout Law and these scouts from Chester Troop 36 were a good example as they got back from a week at ‘Scout Camp’ in time to herald the beginning of the 2021 Chester 4th of July Parade sponsored by the Lake Almanor Area Chamber of Commerce. From left the scout are, Wyatt Strange, Aidan Marro and Morgan Strange. Photos by Gregg Scott
News
July 6, 2021July 9, 2021 Editor

Many “Chesterites” were amazed to see the numbers of visitors the Lake Almanor area had for the 4th of July. On parade day the estimates varied from 15,000 to 20,000, but one thing was for sure; both sides of the roughly mile-long parade route down Main Street were packed several deep for the entire length.

The 43 parade entries ranged from single individuals or floats to groups with numerous vehicles and people. Miss Lassen County and her entourage came over from Susanville to join the festivities. Vendors galore were set up along the route and the local Elks Lodge #2626 sponsored a crafts fair and barbeque lunch at Chester Park.

The general consensus was that Northern Californians were exhausted by being cooped up for so long and needed an escape from the stagnation of the last year. Besides what red blooded American is going to stay home to celebrate our nation’s Independence Day?