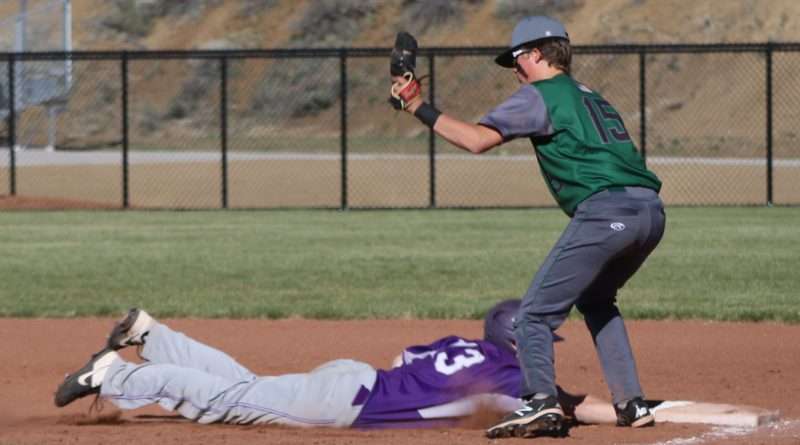 Chester Volcano freshman first baseman Jaxon Holland has the ball and hopes for an “out” call from the umpire as Tiger senior Zach Mulhall slides back to base after a quick check from CHS pitcher Stelzreide. Photo by Mari Erin Roth
Sports
May 5, 2021 Editor

The Chester baseball team is on fire burning through the competition. Playing in Portola May 3rd the Volcanoes took home a 15-2 win from the beautiful new Tiger baseball diamond. CHS was first at bat boldly marking four runs, the Tigers came back with two in the bottom of the inning. Chester kept at it with six runs the second inning, allowing none for the Tigers, and that’s the way it went. The Vols added three runs in the third and two more in the fourth inning, never allowing the PHS boys another mark. Volcano senior and tri-sport standout Kameron Stelzriede pitched the entire game striking out eight of the 21 batters he faced throwing 79 pitches.

The Chester boys are 4-1 overall. It should be noted, that the one loss, it was to the Portola Tigers on April 30 on the Volcano diamond, 6-4. The teams are not currently scheduled to meet again this season so they are even, one win each. Portola multi-sport standout senior athletes, James Sampson and Zach Mulhall scored two runs each in the April 30 victory over the Volcanoes. Freshmen Johnathon Moran and Tanner Carr both crossed the plate for a Tiger run, also. Senior Elijah Lopez and Carr each stole a base.

Today, May 5, the Tigers head to Loyalton to meet the Grizzlies, and then will host the newly formed Greenville Indian baseball team tomorrow, May 6. The last three games on the short schedule for Portola are Quincy (away), Greenville (home) and Loyalton (away).

The Chester Volcanoes have the fattest schedule of the Plumas County teams. They play in Quincy today, May 5, and host the Trojans May 7. Then a doubleheader with Loyalton in Chester at 2 p.m. and 4 p.m. on Monday, May 10, Burney, Lassen, Greenville, Maxwell, and a doubleheader with Redding will polish things off for the red-hot 2021 Volcano baseball team.