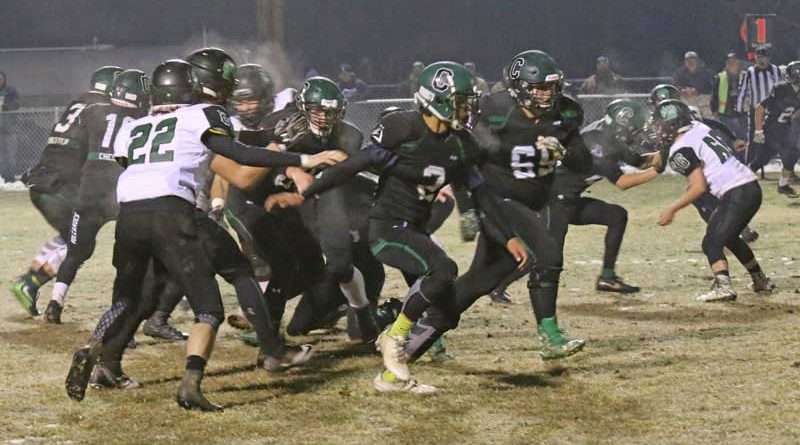 This play should be called “Volcano Explosion” as the Vols burn through the opposition like molten lava. Photos by Mari Erin Roth
Sports
November 24, 2017November 22, 2017 Mari Erin Roth, Sports Editor

The Volcanoes football team has been having one heck of a great season. Chester headed into the Northern Section CIF playoffs undefeated in the Mountain Valley League with only one loss on the books overall during a non-league game to the Pershing County Mustangs of Lovelock, Nevada back in mid-September.

On Nov. 17, the Chester Volcanoes took their seven-game winning streak and turned it into eight when they beat the Biggs Wolverines 28-16 and now move on to the final round of the Northern Section Division 5 Championships.

Tonight, Wednesday, Nov. 22, at 7 p.m. on the Volcano home field, Chester will compete against the Fall River Bulldogs for the first-place trophy.

The Chester football team already won first place in the Mountain Valley League on Nov. 3 when they beat the Burney Raiders, in wet and rainy conditions, by a score of 50-6.

The Vols then received a bye Nov. 10 for the first round of playoffs while Quincy played Biggs in the quarterfinals.

Last Friday, Nov. 17, the Volcanoes took on the Biggs Wolverines in Chester. With a low predicted of 21 degrees, loyal fans showed up in the stadiums bundled up and ready for hot chocolate.

Fans were rewarded by an exciting game that kept them shouting and on the edge of their chilly seats for most of the game. Detailed individual stats for team members are not yet available, but the game went something like this:

Biggs scored first with a touchdown and a 2-point conversion. Those Wolverine plays really got the Volcano fans’ blood flowing, even though there was snow on the field — ankle-deep behind the goal line. The first quarter ended 8-0 for Biggs.

With five minutes remaining in the second quarter, Chester returned a punt for a TD and rushed for a 2-point conversion tying the score at 8-8, and there the score remained until halftime.

It was really cold and the snow and water on the ground were icing up. A fog surrounded each huddle as the players’ breath froze in the air.

After a great halftime show by the Volcano and Biggs cheerleaders, the boys were ready to square off on the field once again.

With nine minutes left in the third quarter, Chester put a touchdown on the scoreboard. The passing 2-point conversion failed, but the Volcanoes pulled into the lead for the first time in the game with a score of 14-8.

Only a minute later, the Wolverines scored a TD of their own and when they completed a 2-point conversion … Biggs took back the lead, 16-14.

The teams held each other scoreless for the balance of the third quarter.

Chester scored a touchdown with nine minutes left in the game. A failed passing 2-point conversion attempt didn’t change the Volcanoes taking the lead from Biggs 20-16.

Holding the Wolverines wasn’t enough for the Vols, they didn’t take any chances and scored a rushing touchdown, widening the gap, 26-16. A successful 2-point conversion with two minutes to go in the game brought about the final score of 28-16 for the Volcanoes.

Tonight, Wednesday Nov. 22, the Chester Vols will take on the Bulldogs at 7 p.m. The two teams will battle for the first place title for Division 5 of the Northern Section CIF championships.

Overall, the Bulldogs are 9-2 while the Vols are 10-1. The Bulldogs won the Shasta Cascade League with a 4-0 record. The Vols won their league with 5-0. Chester beat Fall River when they met for a non-conference game Aug. 25 by a score of 38-12.

The bottom line is pretty close with Fall River averaging 31.5 points per game and the Chester Volcanoes with a slightly stronger 33.6 points average per game.

The weather in Chester tonight is predicted to be clear, that’s a plus, and a bit warmer with a low of toasty 44 degrees.