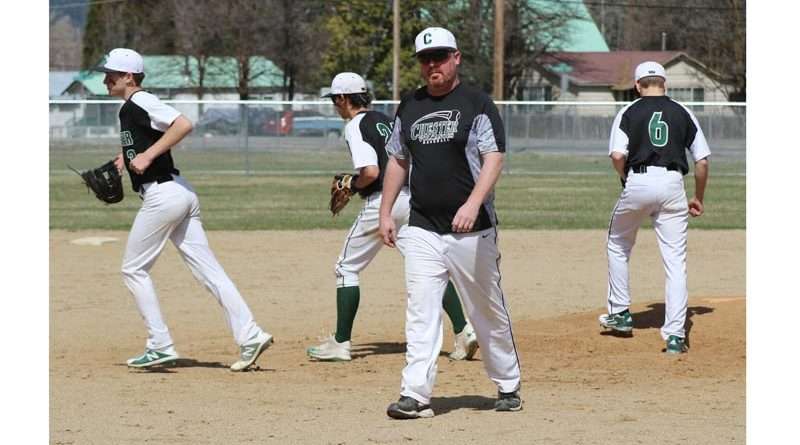 Volcano head baseball coach Aaron Hardesty, center, heads back to the dugout after a quick talk on the mound with Chester ballplayers as they strategize to beat the Tigers.
Sports
May 25, 2018May 23, 2018 Mari Erin Roth, Sports Editor

The Volcanoes headed out of town to play the Mercy Warriors on May 15 in Round 1 of the Five Star League playoffs. Since the Vols have an undefeated record for away games, it was a great trip for the CHS boys.

Chester ran away with the playoff game scoring 10 runs while holding the Warriors motionless.

The Vols began slow and steady, one run for each inning, but in the fourth, they couldn’t hold their excitement down any longer. The Vols burst onto the scoreboard with five big runs in a single inning widening their 3-0 lead to a whopping 8-0. When they scored two more runs in the bottom of the fifth that finished the game.

The Volcanoes were able to go undetected and successfully stole six bases from the Warriors. Burt stole two and Bereznak, Snyder, Branch and Stelzriede each snuck one.

Justin Burt pitched the majority of the game striking out five Warriors of the 16 he faced from the mound. Quick work Burt! Adam Branch also made short work of the Warriors as he pitched a single inning to six Mercy players and struck out one.

The win moved the boys on to round two of the playoffs. They faced the American Christian Academy Eagles on the Chester home diamond Tuesday, May 15.

The first round of the girls’ softball playoffs took the CHS team to Loyalton to compete against the Grizzlies on May 15.

The Volcanoes tied for first place in the Five Star League with Mercy, both having a 6-2 record for the season. The girls have been competing against Burney, Redding, Los Molinos and Liberty for the title.

Loyalton came in second behind Tulelake in the Evergreen League from a field of 13 teams.