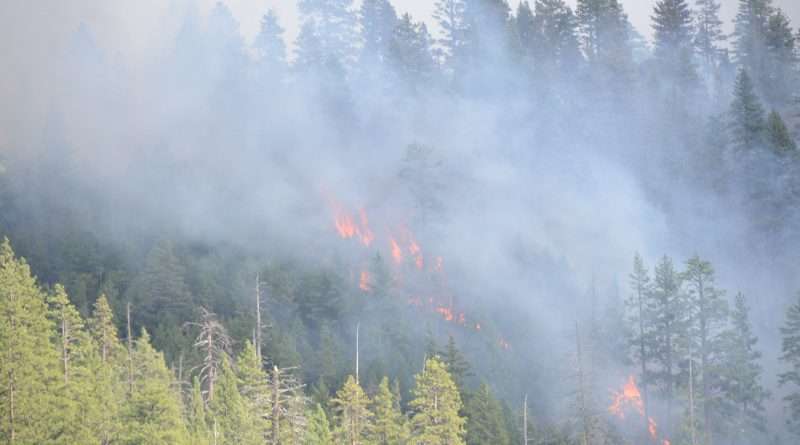 5 p.m., Sept. 8: As the Walker Fire makes its push from Plumas into Lassen County, mandatory evacuation orders are in place for residents residing along Hwy 395 from the Thunder Mountain Road (Wales Canyon) to the Laufman Grade (Old Hwy 59), including the communities of Milford and Brockman Canyon. Residents from Antelope Lake to the Plumas county line, the Genesee Valley road corridor, the Ward Creek area, and the Flournoy Bridge area remain under mandatory evacuation orders. An evacuation center is set up at Lassen County Fairgrounds, 195 Russell Ave. in Susanville. Plumas residents who need accommodations can proceed to Quincy and contact the Sheriff’s Office.

10:15 a.m., Sept. 8: As the Walker Fire continues to burn to the northeast, its impacts are being felt in Lassen County. Plumas County Sheriff Greg Hagwood said he has been working with the Lassen Sheriff as evacuations have begun in the Milford area. As for Plumas County, Hagwood said that all evacuations remain in place until further notice.

8 a.m., Sept. 8: The Walker Fire, which broke out at about noon on Sept. 4, is now at 38,049 acres and 5 percent contained. There are 660 personnel involved in fighting the fire, the cause of which is still under investigation.

Evacuations that were ordered in Plumas County remain in place. The Lassen County Sheriff’s Office has issued a mandatory evacuation order for residents residing along Hwy 395 from the Thunder Mountain Road (Wales Canyon) to the Laufman Grade (Old Hwy 59). This includes the communities of Milford and Brockman Canyon. Hwy 395 will remain open to through traffic. An Evacuation Center has been established at the Lassen County Fairgrounds 195 Russell Ave. Susanville, CA 96130.

9:10 p.m. update, Sept. 7:  According to the Forest Service’s latest briefing, the fire is now 5 percent contained and approximately 24,040 acres.

No new evacuations have been ordered and no structures have been lost. The fire’s progression slowed earlier in the day as a result of cloud cover and reduced fuel to the north as it entered the previously burned Antelope Fire area. The fire spread to the north up Wheeler’s Peak drainage and east around the Antelope Fire scar reaching a mile and a half of south of Murdock Crossing.

When smoke and wind conditions permitted, VLAT’s (Very Large Air Tankers) capable of dropping up to 10,000 gallons of retardant, slowed the fire’s spread to the northeast and on the western flank in the Wheeler Peak drainage. Aircraft support gave crews working in conjunction with dozers time to construct fireline along the southern edge of the fire. Two Super Scooper aircraft dropped water and controlled two spot fires out in front of the main fire to the east. Resources continued patrolling and secured the fireline along the southwest edge of the fire, removing the threat to structures. Tonight, crews will continue securing the 25N42 road while other night shift resources look for opportunities to construct containment line along the fire’s edge where possible as well as areas further out from the fire with the highest probability of successfully containing the fire.

9 am, Sept. 7: The Walker Fire is at 24,040 acres. Sheriff Greg Hagwood announced the evacuation of the Antelope Lake area.

6:45 a.m., Sept. 7 update: Yesterday The Walker Fire was reported at 2,900 acres, but that number has since been adjusted dramatically to approximately 17,912 acres according to data released by the Forest Service last night. It is 0 percent contained. A morning update is expected shortly.

Fire activity increased substantially due to forecasted winds over the fire area. The fire progressed to the northeast, crossing Last Chance Creek through Elephants Playground in the direction of Babcock Peak. Crews were able to hold the fire east of the 25N42 road. Suppression action was taken on spot fires that ignited near and just north of the 172 road, east of Flournoy Bridge. Crews continued structure preparation and were successful in structure defense, containing the spot fires that ignited around them. No structures have been lost.