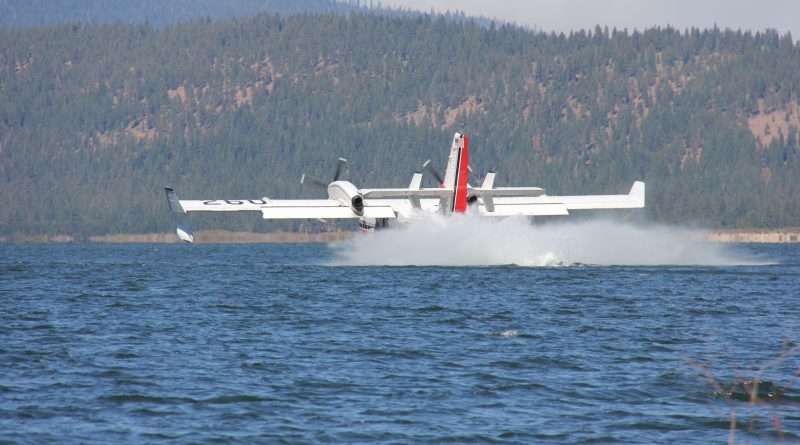 The skies above Plumas have been filled with helicopters and planes battling the Walker Fire in Plumas and Lassen counties. This plane is filling up with water at Lake Davis. Photo by Trent Saxton
News
September 9, 2019September 11, 2019 Editor

2:45 p.m., Sept. 9: The Lassen County Sheriff’s Office is reducing the mandatory evacuation order for residents residing along Hwy 395 from the Thunder Mountain Road (Wales Canyon) to the Laufman Grade (Old Hwy 59), including the communities of Milford and Brockman Canyon, to an evacuation warning. Milford residents only will be allowed to return to the area. Security patrols will continue into the evening hours. The evacuation warning means residents should be prepared to evacuate the area. The Plumas evacuation orders will remain in place for the next 24 hours according to Sheriff Greg Hagwood.

7:30 a.m., Sept. 9: The Walker Fire, which broke out about noon on Wednesday, Sept. 4, in the Genesee Valley, 11 miles from Taylorsville, has grown to 43,931 acres and expanded into Lassen County forcing evacuations there. It is just 7 percent contained. There are now 825 personnel assigned to the fire with a base camp in Taylorsville, and a secondary site being established in Lassen. The cause of the fire is still under investigation, unlike other fires that broke out last week and were attributed to lightning.

Critical fire weather is continuing in the area today with erratic winds. There is a chance for showers and thunderstorms which will bring cooler temperatures and higher humidity levels on Tuesday. Dry and warmer conditions will return later in the week.

5 p.m., Sept. 8: As the Walker Fire makes its push from Plumas into Lassen County, mandatory evacuation orders are in place for residents residing along Hwy 395 from the Thunder Mountain Road (Wales Canyon) to the Laufman Grade (Old Hwy 59), including the communities of Milford and Brockman Canyon. Residents from Antelope Lake to the Plumas county line, the Genesee Valley road corridor, the Ward Creek area, and the Flournoy Bridge area remain under mandatory evacuation orders. An evacuation center is set up at Lassen County Fairgrounds, 195 Russell Ave. in Susanville. Plumas residents who need accommodations can proceed to Quincy and contact the Sheriff’s Office.

10:15 a.m., Sept. 8: As the Walker Fire continues to burn to the northeast, its impacts are being felt in Lassen County. Plumas County Sheriff Greg Hagwood said he has been working with the Lassen Sheriff as evacuations have begun in the Milford area. As for Plumas County, Hagwood said that all evacuations remain in place until further notice.

8 a.m., Sept. 8: The Walker Fire, which broke out at about noon on Sept. 4, is now at 38,049 acres and 5 percent contained. There are 660 personnel involved in fighting the fire, the cause of which is still under investigation.

Evacuations that were ordered in Plumas County remain in place. The Lassen County Sheriff’s Office has issued a mandatory evacuation order for residents residing along Hwy 395 from the Thunder Mountain Road (Wales Canyon) to the Laufman Grade (Old Hwy 59). This includes the communities of Milford and Brockman Canyon. Hwy 395 will remain open to through traffic. An Evacuation Center has been established at the Lassen County Fairgrounds 195 Russell Ave. Susanville, CA 96130.