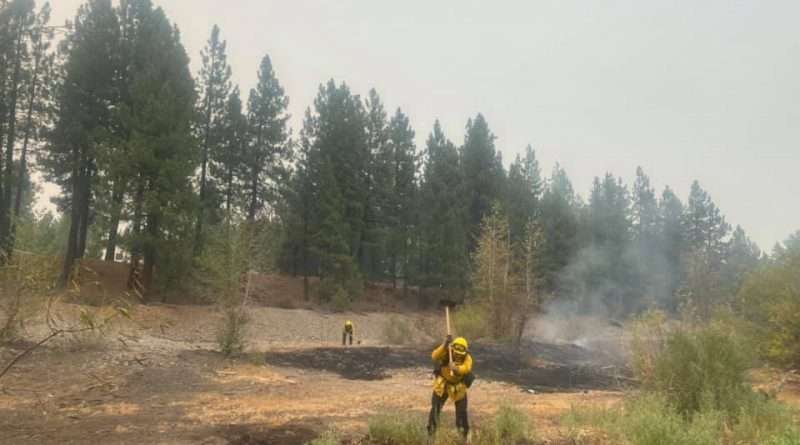 Crews have been successful in keeping the fire out of Chester proper, including extinguishing hot spots. No structures have burned and Chester residents will be allowed to return home Aug. 13 at 11 a.m. Photo courtesy of Fire Department
News
August 12, 2021August 13, 2021 Editor

The big news came out of the West Zone earlier today, when Plumas County Sheriff Todd Johns announced that the residents of Chester, Lake Almanor West and Prattville could return home tomorrow at 11 a.m. During tonight’s briefing Lassen County Sheriff Dean Growdon and Plumas County Undersheriff Chad Hermann provided details about how the repopulation will occur.

Growdon said evacuees are to gather at 10 a.m. at the Community Church at 1400 Numa Road in Susanville, and there will be staff there to direct people. For evacuees at Lassen College, staff will be there to help organize people and there will also be a bus available. Growdon said there are also a number of Chester evacuees at Eagle Lake and there will be a deputy to lead them down. At 11 a.m., an escort will guide people through the closed zone on Highway 36. Those who miss this caravan will not have access except to go around and enter from the west side of Highway 36.

Undersheriff Chad Hermann underscored this point and said it is important that those who want to return are prepared and ready to go. Evacuees will not be able to be escorted from Greenville or Quincy on Highway 89. Though access will be available from the west via Highway 36.

While it’s good news for Chester and residents of Almanor West, what about the rest of the Lake Almanor Basin?

Operations Section Chief Mark Brunton outlined what was happening on various areas of the fire on the West Zone:

Lake Almanor Peninsula: Brunton said that the area is threatened from the north and the south, so firefighters have put a lot of resources in those areas, and they are looking good, but there is still a threat. As he was speaking this evening, he was notified that fire behavior was  becoming erratic and crews were battling to hold A21.

Big Meadows: Good news — fire hasn’t impacted that area; all of the structures are standing. The same holds true with Prattville.

East Shore: Is looking good and crews are in there continuing structure prep, and putting dozer lines in place.

Dyer Mountain: Working with the East Zone and going direct and putting in containment lines, so that it won’t threaten the Hamilton Branch area.

Warner Valley: Able to pump resources in there for structure defense. There has been a lot of success; however, within the last hour, fire behavior has increased. Brunton described an “active firefight in that area” to protect and save those structures.

Lassen Volcanic National Park: Brunton said he flew over over the fire earlier in the afternoon and witnessed creeping fire. He said a lot of structure prep has been done to protect the cabins.

Highway 44 is not being threatened at this point.

The incident meteorologist and fire behavior specialist both indicated that tomorrow will bring another day of thunderstorms with the potential for gusty winds and more lightning strikes, with an expectation of increased fire activity. Then the weather pattern returns to hot and dry with winds from the southwest.

And although there was weather on the East Zone today, it mainly impacted East Quincy and the Mountain Meadow Reservoir, according to Jake Cagle, the planning operations section chief for the East Zone.

During his evening briefing, Cagle said there is the potential for more thunderstorms tonight and the management team is concerned about concerned about downdrafts that throws spots everywhere. That didn’t materialize today, and he is hopeful that it won’t tonight as well.

As has been the case for several days now, the southern perimeter remains in its footprint into Crescent Mills,  and crews will continue to have oversight in there.

Up through Pecks Valley everything looks good, Cagle said, as well as into Keddie Point. Up to Diamond Mountain Road, crews went direct as possible, and work around Janesville continued with building the fuelbreak.

On Dyer Mountain crews went direct, but have a plan to fire the dozer line in chunks to get it tied into Mountain Meadow Reservoir and prevent further spread of the fire. “Another successful day today,” Cagle summed up.