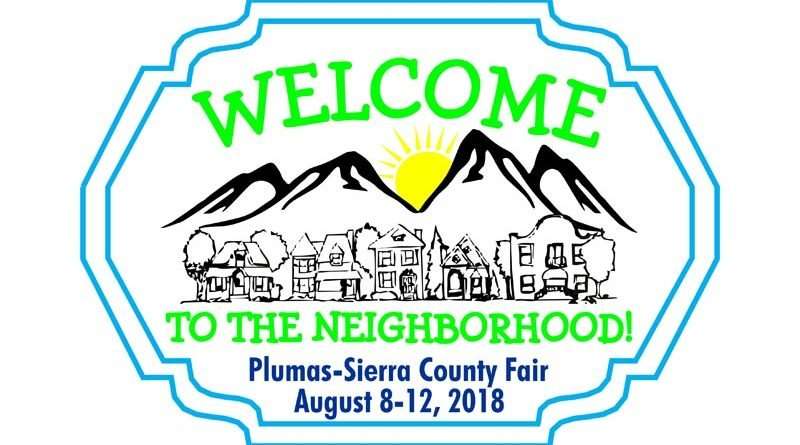 That’s also the theme of the county fair

Small towns have always had the reputation of being welcoming places. Have we gotten out of practice? Long-time residents often recall how neighbors and townsfolk took care of each other. New residents cite how they moved here for the friendly atmosphere. However, when we look a little deeper, many think we may have forgotten how to be better neighbors.

One of those people is Plumas-Sierra County Fair Manager John Steffanic. “I recently took the time to really look at the people on the street in Portola,” he explained, “And I realized, not only did I not recognize anyone, I hadn’t even seen many of them before!”

He said he began to think about how difficult it is to get people involved in everything from school activities, to getting people to enter their jelly or photograph in the fair. Many of the people he was seeing for the first time may have never had the background to encourage them to offer to work in the school concession stand or know that they even could enter something in the County Fair.

“We have a disconnect between our small town values and people that may want to be part of those values, but don’t feel welcome,” said Steffanic.

The fair manager feels that it would do our communities good to extend a welcoming hand to new residents or even those that have lived here for awhile, but have never been made to feel welcome.

Steffanic and the Plumas Sierra County Fair Board think it only makes sense that the one event that exists for every resident in both counties should lead the way in making those residents feel like part of their communities.

Therefore, the 2018 County Fair theme is “Welcome to the Neighborhood!”

Quite simply, the goal of the theme is to help every resident in Plumas and Sierra counties feel they are part of the place they live. “If you run into someone that you have seen before, but have not met, introduce yourself,” Steffanic suggested. “Ask them where they are from, if they like it here, do they have kids, what do they enjoy doing … in other words, show interest by being nosey,” he added.

Steffanic has cited examples of asking people he is not familiar with at the fair to help someone else carry their fair entries, for example. He said the response, the feeling of helping, fosters the kind of connections we have all remembered and longed for. It all starts with reaching out, he said.

To help get the ball rolling, the PSCF Foundation, the nonprofit corporation that exists solely to support the Plumas-Sierra County Fairgrounds, is offering a “Block Party 1-2-3” package to each of the main communities in the two counties. The package contains instructions on how to throw a block party, giving residents an opportunity to gather and meet.

The foundation will supply the food for a taco feed, as well as a budget for entertainment. It is hoped that this initial block party will encourage several other parties in each community. Steffanic said he and others from the fair and foundation boards will show up to serve food while local organizers can spend their time handing out special “Hello, my name is …” tags to attendees.

“If we can have several of these parties in each of our towns, it can only help to make our communities closer,” declared Steffanic. To tie it all together, a white cube will be set out for everyone in attendance to sign his or her names on. These cubes will be gathered up and stacked in front of the main gate at the 2018 fair, Aug. 8 through 12.

PSCF Foundation Board President Nancy Gambell said, “Every time someone waves at someone else at the annual fair, it shows the theme ‘Welcome to the Neighborhood!’ in action. We just want to open the fair up to even more waving!”

The PSCF Foundation has spent over $50,000 to benefit the fairgrounds, purchasing equipment, facilitating youth awards and sponsoring events, like the Neighborhood Block Parties. “We are honored and excited to be part of this great effort to make everyone feel like they are part of our community, especially bringing more into the Fair community.” Gambell said.