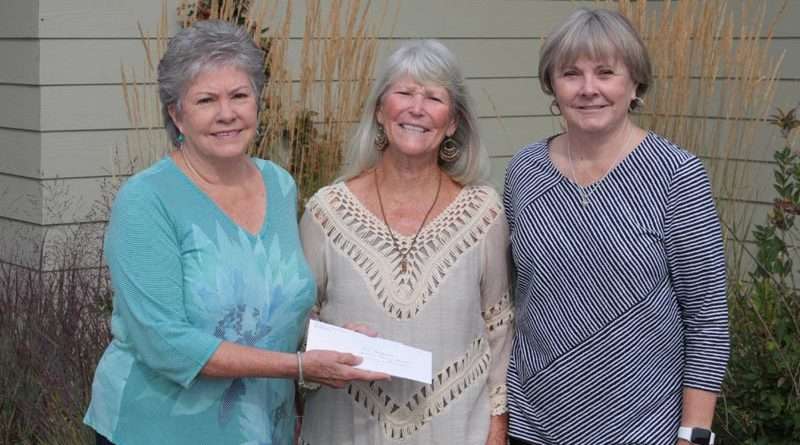 As Pam Birdsall prepares for her fall Suicide Prevention program at Chester High School on Nov. 2, a $1,000 check from the Lake Almanor Community Foundation is a most welcome help. From left are LACF President Ann Bakey-Dengler, Birdsall and LACF Board member Karen Hilleman as they present Birdsall with the check. Photo by Gregg Scott
News
September 18, 2019September 17, 2019 Gregg Scott, Staff Writer

The Lake Almanor Community Foundation (LACF) has been has been supporting the Lake Almanor basin and surrounding areas for over 15 years and yet quite a few people still don’t know exactly what LACF is.

Best kept secret? Not any longer!

LACF was initiated in 2002 with the intent to provide an organization that would promote cultural activities in the local area and raise funds for community services in the Lake Almanor basin.

LACF is a California corporation with a 501(c)(3) designation and contributions made to LACF are tax deductible.

The mission of the LACF is to encourage philanthropic contributions to enhance the quality of life in the community and to contribute to the support of charitable services in the area.

The Summer Music Program is comprised of weekly performances and dance nights throughout the summer months at the LACC band shell in Recreation Area 1.

Patron donations, including drawing ticket sales and silent auction purchases, along with program advertising are the only supporting revenue that sustains the Summer Music Program so no general fund monies are used.

Donations have kept the music playing since the late 1970s and in the band shell since 1987.

The LACF one-day Arts and Crafts Faire on Labor Day weekend is designed for local artisans to display and sell their art. Participating artisans pay a nominal vendor fee to the LACF.

Each year the LACF board also assesses the Lake Almanor Basin’s charitable services and distributes collected revenue to those in need.

Also, they are donating $1,000 worth of winter clothing (coats, boots, hats, scarves and gloves) for children and adults to both the Chester and Greenville Wellness Centers, $500 to the Westwood High School Sports program and $500 to Greenville High School Boosters.

LACF President Ann Bakey- Dengler said LACF is proud of its accomplishments and dedicated to continuing its efforts to raise funds for community services in the Lake Almanor basin.