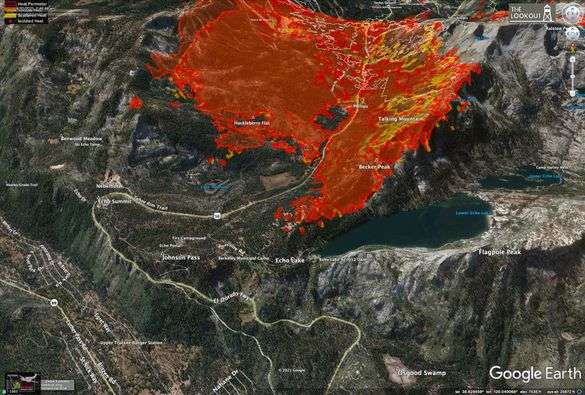 Editor’s note: This explanation of how to read a heat map was included in last night’s Dixie Fire Update, but Plumas News thought it was important information that might have been overlooked, so is reposting it as a separate story.

Lots of us are learning how to access internet resources to help us keep up with information on the wildfires.  There are Facebook pages, websites, blogs and even some very high tech satellite images of the fires.  These satellite images are available from a number of different sources.  They all depend on data from NASA satellites but they each process and present the data a little differently.

The satellite identifies “heat anomalies” or heat signatures and is able to locate those heat signatures on the ground with pretty impressive accuracy, usually within 300 feet.  The data is sent to earth several times a day from different satellites.  It is usually processed and available to the public in about three hours.

There are some limitations to this data. The identification of just what qualifies as a heat source, and where it is located on the ground, all depend on some very fancy mathematical models.  While they are most impressive, they sometimes make mistakes.  False positives data points are fairly common and can be very misleading, particularly for the casual user.

A false positive can occur for a variety of reasons.  Sometimes a hot metal roof can look a little like a hot spot from space.  Sometimes burning material carried up in a smoke column can throw the location calculations off, especially when the satellite is looking at an angle rather than straight down.  An intense fire with a very large column will show lots of heat signatures that were from the column and not on the ground.  These usually produce a sort of “down wind” pattern beyond the real fire perimeter.  And sometimes there are heat signatures that are just head scratchers with no obvious explanation.

If a hot spot on a map looks out of place, it’s good to check some other sources before pulling the fire alarm.

There are different sources of satellite heat maps, but they all rely on the same data.  So checking another satellite map may not help.  A better idea is to check an “official” fire map.  The agencies combine satellite data with infrared data from aircraft and ground-truthing.  These maps are generally much more accurate even if you have to wait a little longer to get them.  Another approach is to just wait a few hours.  A false positive that shows up in the morning may not show up in the afternoon.  Several of the map sources let you click on the hot spot for additional information including the time the data was acquired.  If it’s not on the more recent map, chances are it never really happened.