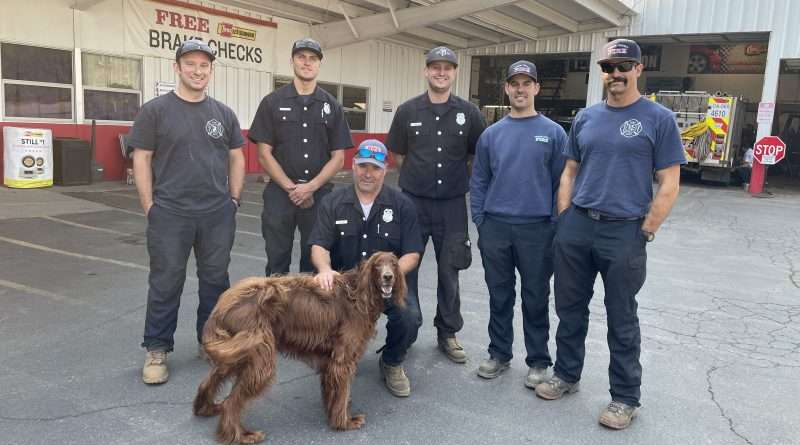 San Francisco and Nevada County firefighters wait while Les Schwab in Quincy looks into an issue with tires Aug. 3. The men had been fighting on the line in Greenville. "Thanks for coming," says Meadow Valley Irish Setter Clover Quigley with a wag of her tail. "We are happy to do it," said a few of the firefighters in unison. Clover. belongs to Plumas News Sports Reporter Mari Erin Roth. They have had a few adventures during the Dixie Fire. Photo by Mari Erin Roth
News Opinion Where I Stand
August 8, 2021 Editor

It’s about 450 miles between my mountain home and this beach — far enough from the fires to not be smoky, today. I came here July 13-15 for vacay to meet my daughter and grandson I’d not seen since December 2019 due to Covid. I drove home via the Hwy 70 Feather River Canyon road in the evening to avoid the scorching heat. I was practically alone on the road except for clumps of firefighters and engines throughout.

I couldn’t believe the road was open because on my left the whole mountainside was burning or had been burned. I had no idea about a fire and everything seemed fine as I traveled down the canyon just a couple of days earlier. I stopped to take a couple pictures but not many and not long. I didn’t want to even be a thought or concern for the vigilantly watching firefighters. The road seemed deserted except for me. That was Thursday, July 15.

A few days later, out of the blue it seemed, I suddenly received a red alert mandatory evacuation from my Meadow Valley home Sunday, July 18, around 3:15 p.m. Dog and I slept in a friends upstairs loft. Monday, July 19, we slept on the floor of the newspaper office. The regular rural postal driver didn’t want to leave her kid and dog so I was to fill in Tuesday, July 20.

I drove the mail route with my dog Tuesday and Wednesday and slept in my editor’s basement (like a 5-star hotel). Delivering the mail Thursday, July 22, we were red alert evacuated from Greenville 25 miles out on the route. We burned rubber getting back to the post office as quickly and safely as possible, definitely didn’t want to have to flee over the mountain in a mail truck. Once back and in my own 4-wheel drive vehicle the postmaster and I followed each other to the Greenville wye and headed for Quincy at 4:30pm. They closed the wye at 5pm. We just made it. Otherwise it would have been 4-wheel drive over Mt. Hough where the Fly fire was just starting.

That night dog and I drove all the way back to the beach to arrive at 8:30 a.m. I guess we were running from the fire and uncertainty. We stayed in a hotel arriving at 8:30 a.m. Friday morning. We remained July 23-29 and signed a 5-month rental lease at the end of that week for a place near the beach starting Aug 1. I had an offer for a place to stay “for as long as you need” that turned into a “for now.” It seemed appropriate to secure something if it was possible, and it was, so I did.  We had a place to be for “however long we needed it.” Sigh of relief.

Friday, July 30, we drove to Orland, which is halfway, and slept at my sister-in-law Kathy’s family house they are emptying for sale. She graciously said I could park vehicles there and use a storage unit if needed. Saturday morning a really great friend and service buddy Francis picked me and dog up at 6:30 a.m.and we drove to a home in Gridley. There we met Camp Fire survivor Scarlett who drove us all to Quincy via La Porte Road. Francis and I drove my 2 vehicles to Orland. Then I drove Francis back to Gridley to pick up his car and Clover and I were going to sleep in Orland after that long day.

We arrived, ate dinner with the family and then came a report of new fires.  Two broke out in the beach community County on the road we had driven in on (199). There was a possibility we wouldn’t be able to get back that way. The idea of being blocked from what I had determined was “safety” was unsettling. Instead of sleeping, I drove. I took an alternate route, 299, to avoid any fire or blocks on 199. As I drove that night on the isolated and relatively unoccupied road, I came around a corner in the dark and the whole mountain ridge was on Fire! There was no one around, no fire vehicles, no other cars. I kept driving straight into the fiery canyon in disbelief. Was this a dream? Am I delusional? It went on for miles. I sent pictures of the fire out to my contacts. No one knew anything about the fire. We arrived at the rental about 12:01am Aug 1 and slept in our new digs, safe from the fire.

The post office wanted me to work Tuesday so Monday, Aug 2. I drove back to the mountains and slept on a friend’s couch. Tuesday, Aug 3, was still mandatory evacuation in Greenville so no work. Wednesday, August 4, I was to deliver mail in Greenville but everything remained closed and things were looking dire for the town. What was next? What could I possibly do to move forward? I tied my dog up where my motorcycles were and drove my truck to Sierra Cycle where they rent UHauls. I walked back and rode one motorcycle to Sierra cycle then walked back again.  I rode the other one over and took the truck back to get the dog.  Sierra cycle took off my camper shell (these guys are saints to the tenth magnitude). They loaded my dirt bike in the truck bed, attached the motorcycle trailer and loaded my big Yamaha bike in the trailer.

Clover and I headed for the coast around 10 a.m. We drove out Portola, Susanville, McCloud. The fire plume was enormous from Hwy 44. We knew something was very wrong. We arrived around 8 p.m. I saw the news about what was happening in Greenville while we were driving, tragedy. The motorcycles stood sentinel watch outside the beach house while we passed out from stress and exhaustion. Aug 5 construction workers for the landlord spotted me as I unloaded the bikes and helped me disconnect and reconnect the trailer. Dog and I drove back that same day to return the trailer with no better plan of what to do with our minutes.

The impact of Greenville and the loss of the community was hitting hard. We arrived around 7 p.m. in Quincy. We had come through Westwood as the townspeople were mandatory evacuating to Susanville heading the same direction we were. It was like a mad exodus and we were swept up in it. People were stopped on various corners, their vehicles loaded with a few precious possessions, talking and bonding with strangers about their collective plight.  We slept in a friend’s trailer on a farm that night in Quincy with other evacuees. Downtown Greenville is gone, no more delivering mail from that post office because it too is gone. Friday, Aug. 6, Meadow Valley mandatory evacuation changed to evacuation warning and dog and I slept in my own bed for the first time in 20 days. It was great. Dog would not leave the bed. She was anchored. I thought I should sleep with one eye open, but I just slept.

Saturday, Aug. 7  I said I would step in and try to deliver mail in Quincy. It was a short auxiliary route. I pictured it way out in the rural area (like Greenville) but it turned out to be right downtown. I was so shaky and frazzled I was concerned to drive a new route in such “congestion.” Pretty funny to think of congestion in Quincy, it was probably just mind congestion. I was afraid I might make a mistake with consequences like bump into another vehicle. I didn’t drive the route.

I packed up the things randomly in my truck that I hadn’t been able to take when evacuated July 18 with the “leave the area immediately” alert. The family albums, a sweater (because you need those at the beach), my morning meditation book, not much.  I heard the road might be open (even though it says closed ahead) over Bucks Lake. It was. I saw no evidence of the Dixie Fire all the way until I reached last year’s Camp Fire scars. I left at 4 p.m. After trying to buy a sandwich at The Knook where they insisted on making and giving me the sandwich even after they had closed. I drive to beach enjoying my toasted sourdough veggie sandwich and salty chips Saturday, Aug 7.  I  slept eventually for a few hours after watching a piece of an update. Is it still burning. Is it still happening?

It seems we have been in this for so long. But it has been a long time. This has been a very long time to be experiencing such enduring stress. The pouring of compassion and empathy for our community and specific individuals that have lost so much, it’s heartbreaking. I need to wind down. I need to take the stress down a few notches. I want to survive this to fight another day. To once again be of service to a community. I don’t know what’s next. None of us do, but I’m taking my cues from Mother Nature. She clearly is in charge. I hope the story of the Phoenix is not just a fairytale.

Letter to the Editor: Give those plow operators a wide berth

If you encounter those plow operators out there today, give them a break…..and a wide berth. They’re gonna have their…