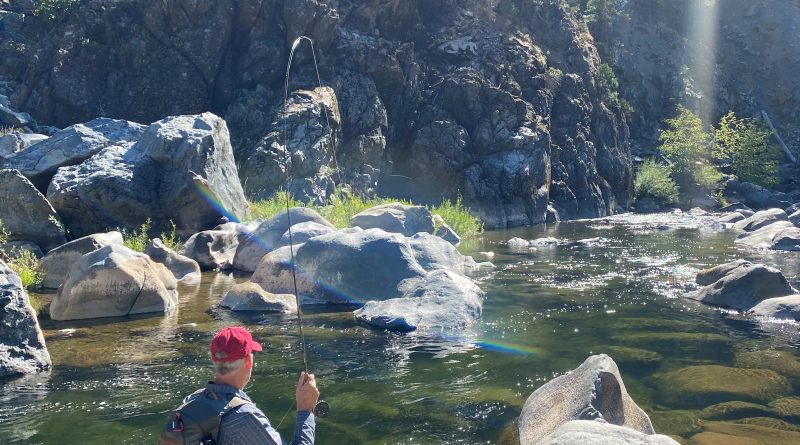 David Hollister’s rod bends as he has a “Fish on!” Oct. 4 at one of his best (secret) fishing spots. Photo submitted
Fish Bits News Sports
October 12, 2022 Editor

“It remains all about the weather at Lake Almanor,” said John Crotty of Almanor Fishing Association. “After a week of absolutely beautiful weather, we are looking at another week of spectacular fall weather with highs in the seventies and lows in the low forties with no precipitation in the foreseeable future.” Water temperatures range between 62.5 and 67 degrees as the Almanor algal bloom continues to spread throughout the lake. Lake level dropped slightly to 4475.90, down .08 from last week.

“Fishing has been ok one day, not so the next, with smaller fish outnumbering quality fish,” said Crotty. “When the fish are active, trollers have been picking up fish on hardware, crawlers/gulps and flies.” Speedy shiners at 2.5-3 mph, Artic Fox or Jay Fair flies (hot orange/tui chub) at 1.5-2 mph and crawler’s/gulps at 1 mph are all good tries. “Fish are migrating throughout the lake, we caught fish along the east shore from the dam to Dorado Inn, in water from twenty-five to forty feet deep, most of our fish came in the top twenty feet of the water column,” said Crotty.

Bank fishermen were catching smaller fish around the dam earlier this week, Hamilton Branch remains a fishing person’s best shot at catching quality fish from shore. Canyon Dam remains the only public ramp available, boats are launching at Plumas Pines for a slight fee. “I heard a rumor yesterday that Plumas Pines is going to have cabins and rooms available through the winter for fishermen,” said Crotty. If interested, contact Plumas Pines to confirm.

“Our streams and creeks are really fishing well, not to mention they are some of the most beautiful places on earth,” said local Quincy fisherman David Hollister.