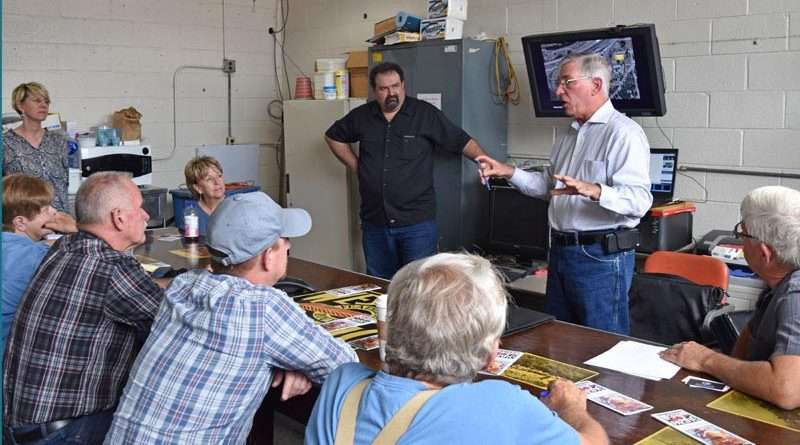 A meeting of the minds took place at the Western Pacific Railroad Museum (WPRM) in Portola on July 13, discussing exciting prospects for the future at the museum.

The purpose of the meeting focused on the future Whitman Building, the consideration of ideas for raising funds, awareness and support for getting the building and associated infrastructure such as a parking lot and entry road built. The meeting also focused on the need to solicit assistance in moving these projects forward.

Members of the local community may have heard about WPRM’s economic development plan, which includes a multi-event, 20,000-square-foot venue space dubbed the Whitman Display and Event Building (WDEB).

Eugene Vicknair, a 34-year volunteer at WPRM and part-time local, introduced the future plans with a slide show and enthusiasm, saying, “I have a background in engineering and public space design, therefore I have taken the lead on design of the WDEB project. I am trying to draw a variety of threads together regarding the many funding pools needed to bring the Whitman Building fully to fruition at WPRM.”

The Whitman Building project already has forward momentum, with payments on the 20,000 square-foot prefabricated building being made.

Vicknair noted, “Now we’re getting to the point where we need to finish up these payments and get the building built, and one thing that this is going to be when we’re done with it, and of course this really impacts the city and the county, is a 20,000 square-foot building. This will be the largest indoor event center that I know of in the county, and I think in Sierra County as well.”

“It’s primary purpose for the museum is going to be for equipment display, but this is also a building that can host sports tournaments — you could have events in it with room for a stage and vendors and whatnot— it would be a huge financial impact for the city and the county,” Vicknair emphasized. “I know we’ve had to turn away events due to insufficient available space, and this is going to change all of that. This is a great move not only for the museum, but also for the greater community.”

Vicknair went on to explain WPRM’s current top three priorities, with the Whitman Building placing first, followed by projects such as the railroad line extension into the heart of Old Town Portola, as well as smaller needed improvements such as high capacity restrooms and improvements to the WPRM entry road.

“These are all pieces that tie into the cost of all of these programs,” Vicknair stated. He also noted that WPRM has their eyes on the potential to expand and acquire new properties to prevent the museum from being surrounded by development, and an ongoing partnership with the Old Town Portola Event Center, which ties into WPRM’s goal to help revitalize the community.

Vicknair spoke about the need to draw on disparate funding sources to reach project completion, with an estimated total cost projection of $3.5 to $4 million dollars.

“Those of us who have been up here for a while know how hard it is to get any kind of grant, any kind of foundation money or donations up here — we’re off the beaten path,” Vicknair commented. “This is why we are all here. I’m trying to get the team in on this, and see what kind of help we can get in on different areas.”

Vicknair also pointed out the fact that this project is playing off of the area’s native history.

“I have been meeting with Solar Management for about a month regarding the vast potential in the WDEB redesign, and discussing how these changes could impact the city,” Vicknair stated.

Rich O’Connell introduced his team to the room as solar experts looking to help bring opportunity to Portola.

O’Connell said, “As a nonprofit, you are extremely limited by what is available to you, but that’s not how the solar game works.”

Boiled down, Solar Management feels that opportunity is currently knocking on the door at WPRM, especially in regards to the planned Whitman Building.

O’Connell touched on some numbers, noting that the planned project would likely need at least one megawatt of power to function, if not two. For reference, a hairdryer uses about one kilowatt.

O’Connell also noted the convenience of the orientation of the building at WPRM, stating that the southern exposure of the roof on the Whitman Building façade would be ideal for solar.

“The way that I could see this opportunity working for WPRM and the city would be looking at this from a private equity standpoint,” O’Connell said. “In other words, people that are willing to come in and put the monies up to put the solar on the building, and then they could take advantage of the solar tax incentive credit, and possibly sell electricity to the museum at a discount.”

Solar Management said the idea could also apply to the city in general. “Did you know that 102 years ago, in 1915, they brought electricity to Portola? So here we are, 102 years later, and we’re going to bring renewables! I think that if we use our skills correctly, we can change this thing around and bring prosperity back to the city,” O’Connell enthusiastically said.

O’Connell spoke about the revenue potential, touching on his experiences in places such as Santa Rosa in bringing solar to the community in areas such as water distribution systems, substations and more. “This town is not down and out,” O’Connell stated. “This town is just getting started.”

O’Connell also noted that there was a lot of opportunity to bring in outside money from people that would invest in Portola, and would get a fair exchange for their investment.

Solar Management explained how the integration of solar power would benefit investors, delving a bit more into energy costs and the potential savings to be had. “There would be savings right off the bat,” O’Connell said.

Mariclair O’Connell chimed in, noting that the revenue brought in by solar energy can quickly rise and the key would be to manage the power correctly.

The possibility of bringing in solar would also affect the local employment market, according to Solar Management. Rich O’Connell stated that he would be interested in talks with the local Workforce Development programs to project how the currently high unemployment rates could be affected.

“Solar developments bring in a lot of cash,” O’Connell stated. Jobs brought in to the area would include everything from electricians to caterers for the work site.

Mariclair O’Connell added that there is quite a bit of revenue in the production of power from the sun, with a wide variety of ways to utilize it.

After more exchanges on the possibilities of solar power, Solar Management also spoke about the potential for the city in such an undertaking. “Imagine 10 to 20 megawatts of power that the city would own,” Rich O’Connell said. “Portola would become a power producer. I feel that any area can go into the power business.”

Patty Clawson of Big Fish Creations commented, “Solar is a whole different angle that nobody is talking about. It really is a win, win, win all the way across the board.”

Vicknair then put the question to the room, “Where do we go next?” Comments included the initial push to get the building paid off and into the first phases of being built on WPRM property, with initial rough estimated costs in the ballpark of $250,000.

“The building is meant to be put up in phases,” Vicknair said. “Just to get to having three walls and a roof up will give us badly needed, usable covered space for our equipment.”

Jim Judd of Solar Management commented, saying, “I would hate to lose out on this opportunity.”

With ideas flying fast and furious, WPRM successfully carried off its first meeting of the minds, with a wellspring of potential laid out for the consideration of the community.

In closing, Mariclair O’Connell stated her thoughts on the project, saying, “This is a really good investment. It would benefit the community, and that is what WPRM is trying to do.”