There will be a Candidates Reception at the Elks Lodge in Quincy from 6 – 9:30 p.m. on Monday, Jan. 23. This event is spearheaded by “Chef” Mike Miller and will feature light hors d’oeuvres, an open mic for musicians, a 50-50 raffle, and provide an opportunity to get to know the five candidates running for Honorary Mayor of Quincy to raise funds to build a Quincy Outdoor Theatre. Plumas Performing Arts is handling all of the donations for the project and (donations) votes may be cast online at plumasperformingarts.org. Each candidate will have a jug where you can “vote” (donate) for them in person as well. Admission is $5 and all proceeds will benefit the Quincy Outdoor Theatre Project. Beverages will also be available through the Elks Lodge.

“The actual building of the outdoor theatre is currently in limbo until the county and state finalize the new courthouse,” said Tristan McMichael who birthed the idea as his senior project at Quincy High. “As of right now, one of the more ‘favorable’ choices is to utilize Dame Shirley Plaza and potentially extend the Plaza across Court Street. If they move forward with this idea and the state chooses to utilize this space, there may still be room for the theater with a potentially bigger green space.”

That makes the timeline of the project unknown, for now. “Given the history of this potential new courthouse (with over 15 years of it maybe happening), we are exploring other potential sites because we do want this theater to happen in the near future instead of in the prolonged eventual future,” said McMichael. “Permitting for the proposed theater will be over $7,000 and if I were to proceed at Dame Shirley before the courthouse is finalized, I would lose that $7,000 and have to resubmit plans, if and when that is finalized, and that’s a gamble I don’t want to make.” None of this changes the desire and need for an outdoor theatre for the community and the benefits it would bring. “Chef” Mike Miller and McMichael continue forward promoting the fundraising event to have a little fun and gather the monies needed to complete the project, wherever it lands.

Talking about the effectiveness of the Honorary Mayoral race as a fundraiser for the Outdoor Theatre project, event organizer “Chef” Mike Miller said the beginning was, “slower than I hoped for but then ‘boom’ we had candidates sign up.  Now I’m hoping that they understand the concept of raising funds.” Methods for getting dollars (which equal votes) are straight donations (one dollar is one vote) and there will be individual fundraising events going on too, like drawings, bake sales, receptions and other legal avenues of raising money.  “We are getting in some funds, and it is over the thousand-dollar mark which includes the $25 fee (to become a candidate) and a donation of $300 from the Rotary Club,” said Miller.

“There are five candidates, with a sixth finishing paperwork,” said McMichael.  There are so many musical events, musicians, and performance artists that spiral around Quincy, especially in the summer. During those ideal weather days of spring, summer, and fall, many of the events happen outside. Quincy is a valley of paradise in the Sierra Nevada range along the Pacific Crest Trail. It is a popular destination for tourists via motorcycle, cars and RV’s for all its local treasures of music, art, sports, and scenery. An outdoor theatre sounds like another attraction. Bands during the Farmers Market traditionally would have extension cords and equipment set up on the lawn. Sometimes with an awning and sometimes not. To have a permanent fixture for performances and events would be, well, very nice.

“We’re being a bit ambitious and making our fundraising goal $10,000,” said McMichael. “The deadline to vote is midnight on February 2nd.” No one has done an event yet but there are donation jars for Red Powell at the Drunk Brush and for Matt Kitchens at the Toy Store. “I’m extremely thankful for all of our candidates who are volunteering their time to help us raise funds!” said McMichael. “Make sure to follow us at Quincy Outdoor Theater on Facebook and Instagram.”

Valerie Flanigan: Valerie has been a part of Quincy for 28 years. You can’t miss her for her beautiful smile and pink hair. Her heart is full of goodness, kindness, and compassion for this community, and has always actively been involved in aspects important to its health and welfare. Add to this her wonderful family – husband Mike and three sons John, Jack, and Shane – she’d make an awesome honorary mayor.

Matt Kitchens: Matt Kitchens is a resident of Quincy and owner of the Toy Store going on 9 years. Any interaction with Matt will demonstrate his love and commitment for this community and his business. His ready smile and generous spirit are evident as he can often be found hosting fundraisers for local youth sports teams and other charitable groups. He has experience in the position as a longstanding honorary mayor of his family of seven.

Adam Mazzella: Adam Mazzella joined the Quincy Community in July of 2022. Although he is a recent addition to our community, it feels like he has always been here due to his giving and compassionate spirit. Adam, alongside his spouse Tara, took over as owners of Grocery Outlet in Quincy in July of 2022 and have been extremely invested in and supportive of community efforts and activities. Through the store, they donate stock to local farms, C.A.N., P.C.I.R.C., and other community organizations who ask. Adam currently serves as the snowboarding coach for Quincy High School, helping the students of Quincy have access to these kinds of extracurricular activities. Those who meet and get to know Adam would say he is already an honorary mayor in his own right because of the way he interacts with his customers, employees, and everyone around him by creating a positive and supportive environment.

Red Powell: Red is a retired school teacher who taught P.E., math and history at Quincy High School. He also served as the football coach and as a basketball referee (since he played basketball in college). He has been happily married to his wife Sue (an elementary school teacher) for over 60 years. Red is beloved by his former students as well as the community at large.

I love Quincy and have enjoyed being a contributing member of the community since my arrival in February 2007. I’ve been lucky enough to volunteer through many Quincy organizations like KQNY since 2008, perform to raise money for Plumas Arts at the Town Hall Theater twice, co-star with Dr. Jeff Kepple at West End Theatre, serve as an active member of Community Connections, offer free rides home from holiday celebrations, become and serve as a UC master Gardener, donate services and art to many auctions, teach classes at the County Fair, and so much more. I’ve been a supporting member of Friends of Plumas Wilderness, Plumas Arts, Plumas Audubon, Community Connections, KQNY, United Bikers of Northern California, Sierra Buttes Trail Stewardship, and more. I am passionate about Quincy and have tried to share that enthusiasm and my positive experiences with the public via my work as a writer at Feather Publishing since 2016. If I am chosen, I promise to serve loyally and loudly, touting the wonders of Quincy, and especially that of the new addition of Quincy’s Outdoor Theatre!” 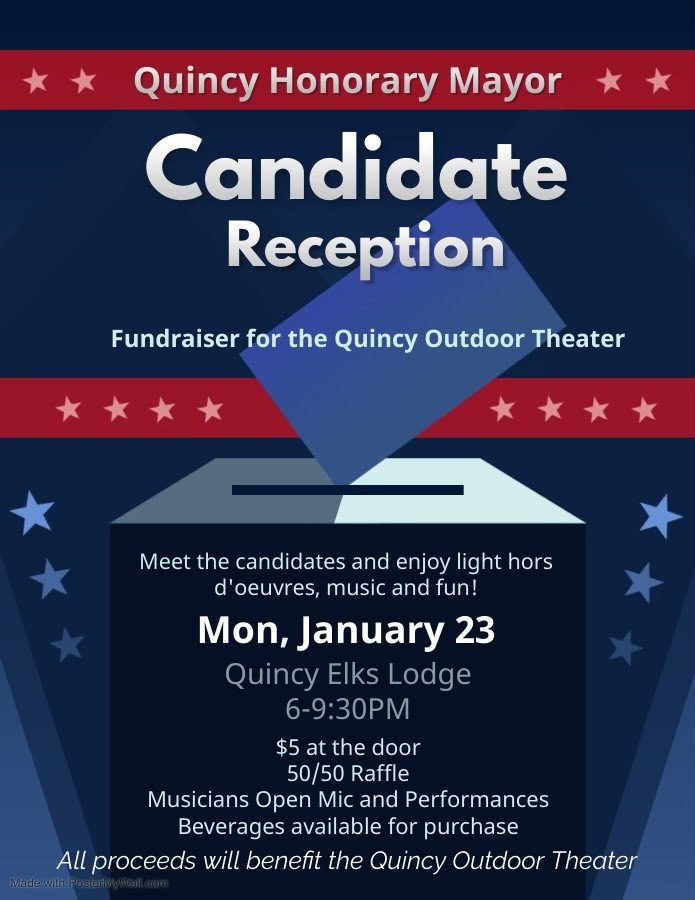