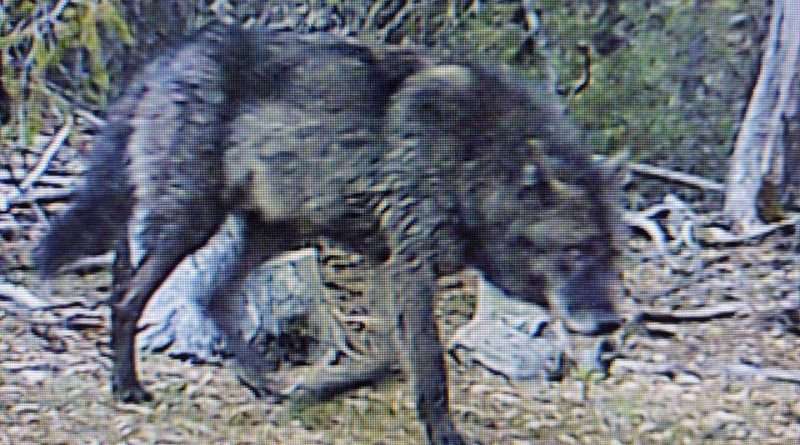 This is the wolf that is believed to be the father of the new pack of eight cubs. Photo by Van Probst
News
August 10, 2020August 13, 2020 Editor

A recent addition to a local family has gained a lot of notoriety — the Lassen Pack added eight new pups to its brood.

According to the California Department of Fish and Wildlife, the Lassen Pack is the only currently known wolf pack in the state. The new pups join their parents and four older half siblings to combine for a pack of 16.

This is the largest litter yet: the pack had four pups in 2017, five pups in 2018, and four pups in 2019. Of this year’s eight pups, genetic testing reveals at least four are males and two are females. Watch the young brood at play: https://youtu.be/r1pghtqGyEw

While the pack has expanded with its eight new pups, there’s another new wolf in the pack — their father. Fish and Wildlife says that genetic analysis indicates that the original male was a 2014 offspring of southwestern Oregon’s Rogue Pack, and while he sired the 2017 to 2019 litters, he has not been detected with the pack since spring 2019.

A black-colored adult male began traveling with the pack as early as June 2019, and genetic analysis of 2020 pup scats show the black wolf is the new breeding male. He is not related to other known California wolves, and his origin is currently unknown.

The pack’s breeding female (LAS01F) is not related to known Oregon wolves, and genetic analysis indicates that she likely dispersed from some other part of the northern Rocky Mountain wolf population. LAS01F was originally tracked with a GPS collar from June 2017 until it failed in November 2019. She was recollared in June.

In September 2018, a yearling female from the pack was found dead, and the matter remains under investigation.

The Lassen pack is California’s second confirmed group since 2011. The Shasta pack, a family of seven, was confirmed in 2015, but by 2016 could no longer be found.

Fish and Wildlife reminds the public that killing a wolf is a potential crime and subject to serious penalties including imprisonment. It takes very seriously any threats to this recovering wolf population and fully investigates any possible criminal activity.

Sierra Valley rancher Dwight Ceresola said that some uncollared wolves were spotted earlier this spring, but none recently. Those who report sightings can be met with skepticism and questions such as “Are you sure it was a wolf.”

Historically Fish and Wildlife is careful about sharing too much data about the pack’s activities and whereabouts. That’s because not everyone is a fan of the wolves.

Ceresola said that when individuals have issues with problem bears or mountain lions, a trapper is called out to address the issue, but a non-lethal approach is mandated for wolves. So a rancher who is worried about his animals would be encouraged to install ribbons or other devices designed to discourage the wolves or move their livestock indoors or to protected areas.

In Indian Valley, Van Probst said wolves are regular visitors and he and his neighbors can hear them howling at night. He said it’s easy to discern the sound of a wolf. “They’re really loud,” he said. “Nothing like a coyote.” Although he did say that the pups could sound more like a coyote than a full grown wolf.

Probst is known for his skill at photographing wild animals and his Facebook page is filled with photos of bears and mountain lions. On the afternoon that Plumas News called to ask him about wolf sightings, he was out removing rattlesnakes from someone’s chicken coop.

Probst has gotten very close to wolves and even found himself in the middle of a pack once. Was he scared? No. And he’s not afraid of a lion or a bear either.

“I was seeing wolves until about the tenth of April,” Probst, and if they follow the pattern of past years, he would expect them to return to the Indian Valley area by the end of August through mid-September.