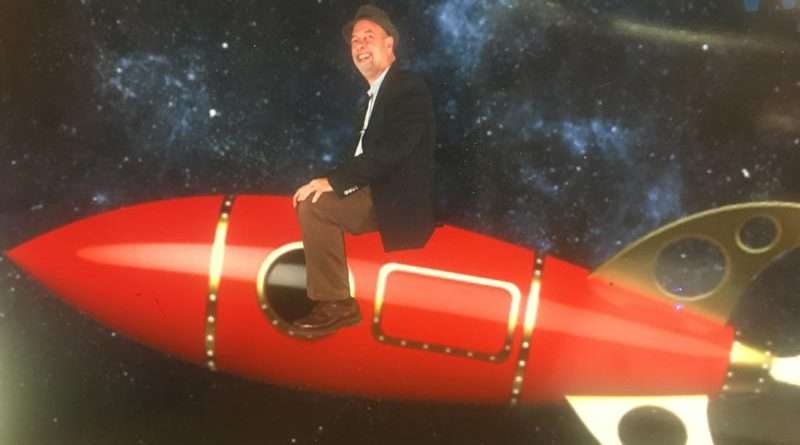 Fair Manager John Steffanic takes a rocket ride at the County Fair Expo in Reno on Jan. 18. The exhibit was one of the many on display for fair personnel around California to consider adding to their events. Photo submitted
News
March 18, 2020 Mari Erin Roth, Staff Writer

Plans for the 2020 Plumas-Sierra County Fair are in the works.

Fair Manager John Steffanic was joined in January by Fair Board Chairperson Kenny Chance at the County Fair Expo in Reno, scouting talent and exhibits for the 2020 fair. The three-day event exposed the Plumas County scouts to an abundance of food vendors, musical performances, attractions and displays designed for county fairs across the western United States.

Steffanic described a plan to set up the West Lawn as a kids area during the fair with youth as the focal point for the 2020 fair.

Much effort has gone into rearranging access inside the fairgrounds in the morning during feeding time for the animals. Roadblocks will be established and the flow of traffic has been rerouted to reduce the possibility of any unintended casualties to youngsters tending to their entries. Folks driving inside the grounds before the fair opens will need to pay attention to signs as things will be different at the 2020 fair, but decidedly safer for pedestrians.

Reporting with final numbers for the 2019 fair, Steffanic said that attendance was up by 4,000. Concession sales were up by $5,000 and exhibits were up 25 percent.

“The amount of revenue generated by the pay-what-you-can days more than doubled,” said Steffanic. “The top five concessions were Munch a Bunch (who ran out of food), Tai Tai, Rotary of Portola, Dippin Dots and Lisa’s.

The “Show What You Know” classes at the 2019 fair were not well attended, but the public was happy that they were available according to Steffanic.

The 2020 exhibit guides are already out and available to the public. They can be picked up at the Fairgrounds office any weekday.

Other items discussed during the Fair Board meeting included the decision to separate the car show event from the annual county picnic. The 2020 car show will keep the first weekend in June date — Saturday, June 6 — and a new alumni event will center around graduation weekend, Saturday, June 13.

At the third annual Americana Festival, held Labor Day 2019, attendance rose to 500. “We need to reach 800 to start breaking even,” said Steffanic. The Fair Foundation made over $1,000 in wine and beer sales at the event. “We had a perfect mix of bands this year,” said Steffanic. “Peter Rowan loves coming to Quincy and The Newport Nightingales were a huge hit with their class act.” Camping was up to 37 in 2019 compared to 7 in 2018.

The square-dancing section of the Americana Festival improved tremendously. There were over 90 participants in 2019 compared with 33 in 2018. Carolyn Kinney sold four quilts while taking care of the group.

The county budget for 2019-2020 was approved in September. The General Fund contribution allowed the purchase of a forklift. Fair Manager Steffanic has requested a reclassification for the assistant position.