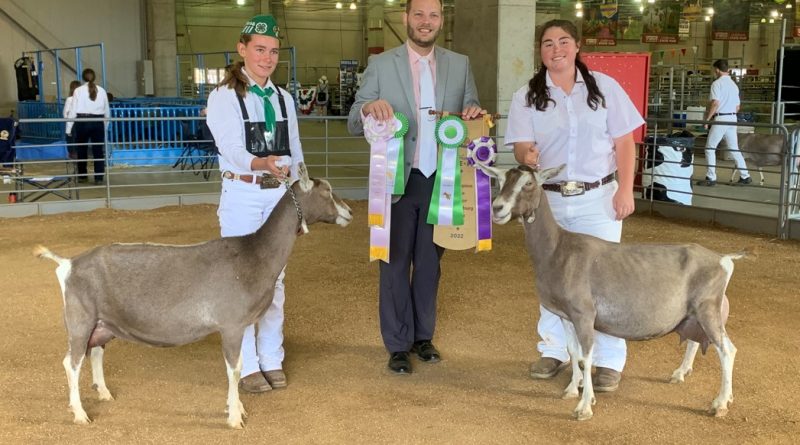 Kristin Roberti, of Sierra Valley, received Grand & Reserve Champion honors with her Toggenburg Dairy Goats in the youth division at the 2022 California State Fair. She also won Junior Champion and Champion Mammary System, and placed third in the FFA Showmanship Division and received a Herdsman Award. “I’m pretty proud of myself after not getting to show for two years because of Covid,” said Kristin.

And at just 19 years old, young Roberti has already been working on events like this for a very long time. She has specialized in finishing goats and steer from her home on the Roberti Ranch in Sierra Valley. “I would go out in the herd and pick a few animals that looked promising,” said Kristin, “and then switch their feed to a hay diet. After a few weeks I would pick the one that I think is going to hang the banner and make a really good carcass.” At that point, she would change the feed again to a high protein grain and hay and tend to the animal to finish it the 3 months before a show. “The animals taste best when slaughtered at a year to 14 months,” said Kristin.

This was Roberti’s final youth exhibition at the California State Fair. Since high school she has been a student of agriculture business at the College of Southern Idaho (Twin Falls) and is already in her sophomore year. She has been taking bookkeeping, time management, agriculture management, welding, and diesel mechanics to name a few subjects. She has remained active in school and even earned her spot on the Dean’s List both semesters. Her proud parents are Dave and Jane Roberti, and she is the granddaughter of Helen Roberti.

Kristin enjoyed doing the State Fair and the Plumas-Sierra Fair but there was nothing easy about it. “I’ve been showing cattle and goats for years,” said Kristin. “I take pride in producing animals that someone describes as ‘the best beef I’ve ever eaten.’ It’s real humbling.”

She had five goats and a steer (Petey) entered in events this year. “Animals are a lot of responsibility,” said Kristin, “They get fed first. The animal eats before you do.” Kristin described late nights and very early mornings. “You have to have a lot of dedication to do it,” said Kristin, “and it’s not a cheap project to do. Not every year will you make enough to say, it was a good profit.”

The daily routine during an event is rigorous, let alone doing two of them in a row. The schedule at the two fairs was up at 4 a.m. and not to bed until midnight or even 2:30 a.m. One night they didn’t get in and settled until 3 a.m., and what did Kristin have to do? “Feed the animals first, not go to bed or eat myself,” said Kristin. “When it was all over I slept for two days!”

Did Kristin feel like she missed out on anything taking on all the responsibility of tending to her animals all these years? There were times she missed out on things because she had to work at a job to pay for her animals or was too busy working with her animals to go and do things with her peers but she is comfortable with her choice. “I would much rather have 4-legged friends than 2-legged,” said Kristin. “I stayed out of the drama.”

People have been interested in purchasing her breeding project goats but they have done so well in competitions that she “can’t sell them cheap.” But Kristin has taken a few numbers of youngsters getting started in 4H and thinks maybe she can help them out a bit. She had one person who might buy one of her goats who is nursing a lamb with the milk of a goat. “The lamb on goat’s milk is 60 pounds heavier that the others,” said Kristin. “It’s easier to digest. It’s good for calves, too.”

Kristin’s presentations this year would enable her to go to Nationals but she isn’t going to go. “Technically I qualify, but it is a lot of money to get there, and I’ve got good goats, but maybe not national quality.” Which makes sense, if you are going to spend money to get there, it would be nice to have a chance at winning. Besides, the back-to-back events resulted in a real endurance test those couple of weeks.

“It was fun, but I am really looking forward to getting back to school,” said Kristin. Her plan is to complete her education and return to Sierra Valley where she can apply the new knowledge at Roberti Ranch working with her family. She has learned from the ground up what the history is at Roberti Ranch and how things actually work on a ranch in Sierra Valley. Learning the latest in Agriculture Business to bring the best of the best to her family’s ranch is Kristin’s goal.

The family business is no small operation, either. The ranch cattle and hay operation take place on a spread of nearly 6,000 acres. Of those acres, 2,000 are in alfalfa and 1,500 are under irrigation. The commercial cowherd is made up of roughly 225 spring calving cows and 275 fall calving cows that winter in the foothills. The spring cows stay home in Sierra Valley and start calving in March. That is a lot of “Ag” to manage year ‘round.

Once Kristin is back working at the ranch after graduation, she can settle back into the regular routine at Roberti Ranch, where grandma Helen prepares lunch on the weekdays for the family and whoever else might be working on the ranch. The table is often full of family members and friends who have learned to stop by around noontime. In the summertime the hay crew also eats lunch at “Grammy’s” house and her dedication to the family and the business is credited as a tremendous part of the ranch’s success.

Soon they will have Kristin in the mix contributing to the ongoing legacy of the Roberti (family) Ranch. Congratulations to young Kristin Roberti for her hard work and dedication, and her many accomplishments and honors in Agriculture this past decade. It looks like the Roberti Ranch future is in good hands.