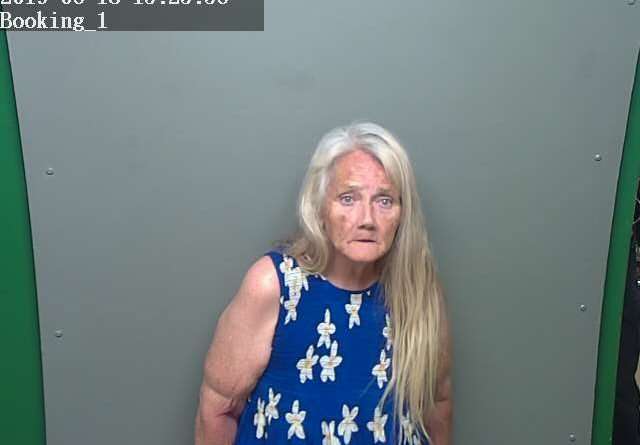 Michelle Powers has been arrested in allegedly assisting in her daughter's suicide.
News
June 20, 2019June 23, 2019 Editor

A Nevada County resident was arrested Tuesday, June 18, in Quincy and charged with assisting someone to commit suicide.

This is the first time someone has been charged with this kind of felony in Plumas County, according to District Attorney David Hollister.

Around 9:30 a.m. on June 18 the Plumas County Sheriff’s Office received information from the California Highway Patrol that there was possibly a dead woman on Lee Summit, according to Sheriff’s Office Investigations Sergeant Steve Peay.

A CHP officer located Etta Elmore, 52, of Penn Valley in the woods nearby. They were aware that Elmore had been reported missing from Nevada County, Peay stated.

When Sheriff’s Office personnel responded to the area, they too saw her located about 50 feet over an embankment off a dirt road. That road parallels Highway 70. “No obvious signs of injuries were located on the decedent,” Peay said.

The CHP had contacted Elmore’s mother the evening of Monday, June 17. She had no information to assist them in attempting to locate her daughter.

A subsequent interview of the mother revealed she had assisted her daughter in ending her life by providing her with prescription medication. Through the investigation it was determined Etta Elmore had made previous suicidal threats but had made no attempt to take her life until now. No other suspects have been identified in this case.

An autopsy will be performed to determine the cause of death.

The mother, Michelle Powers, 67, from Lake Wildwood in Nevada County was arrested for assisting in her daughter’s death. Powers was transported to the Plumas County Correctional Facility and booked on $250,000 bail.