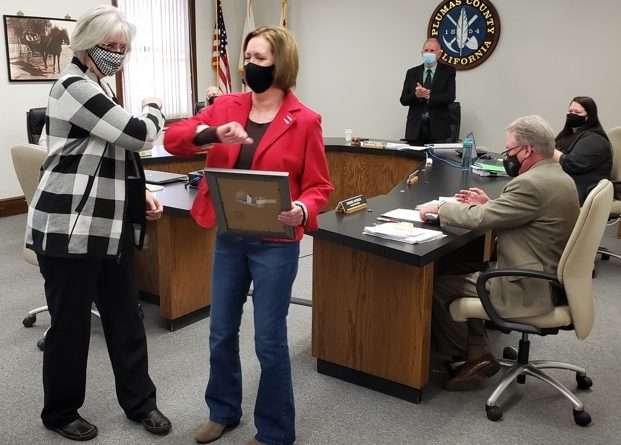 Donna Johnson, representing the California Clerk of the Board of Supervisors Association, traveled to Plumas County to present Nancy DaForno a certificate of appreciation upon her retirement. Photo by Gabriel Hydrick
News
March 2, 2021March 2, 2021 Editor

“We miss you already,” Chairperson of the Plumas County Board of Supervisors Jeff Engel told Nancy DaForno regarding her retirement.

After working for Plumas County for more than 30 years, DaForno’s last day on the job was Feb. 28.

As special recognition, Donna Johnson, representing the California Clerk of the Board of Supervisors Association, read and then presented DaForno with a framed Certificate of Appreciation and Recognition during the supervisors’ March 2 meeting.

On behalf of the state association, Johnson thanked DaForno for her years of dedicated service to Plumas County citizens. Johnson added that DaForno is highly respected by her colleagues at the state.

Following up on Johnson’s comments, Engel presented DaForno with a potted orchid.

DaForno’s career with Plumas County began in 1990 in the clerk’s department. Then, at the recommendation of former County Administrative Officer Jim Stretch, a new position was created and the position moved from the Clerk to the Board of Supervisors. DaForno was hired for that new position and has remained in it, as supervisors and county administrators have come and gone.

“Everything I think of (to say) is inadequate,” said Supervisor Sherrie Thrall. “She is going to be deeply, deeply missed.”

Supervisor Kevin Goss said that DaForno helped him through an intimidating time when he became supervisor in 2013. And Supervisor Greg Hagwood pointed out that they joined the ranks of employees for the county at about the same time. “I worked with you for a long, long time and it’s not going to be the same.”

While Plumas County Human Resources and the Board of Supervisors seek a replacement for DaForno’s position, County Counsel Paralegal III, Kristina Rogers is filling in.