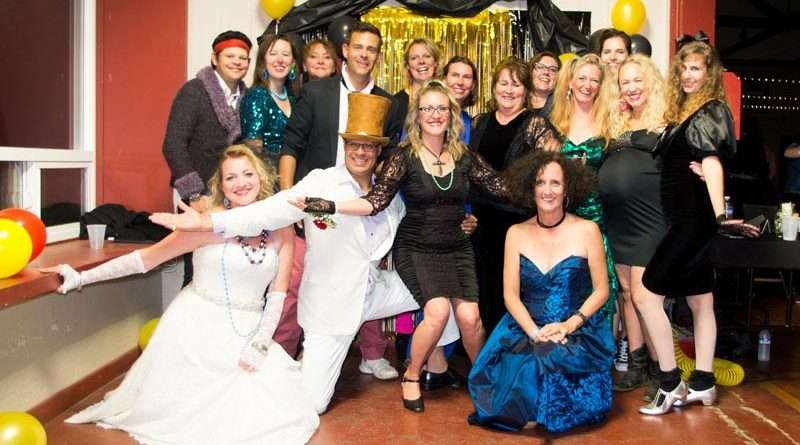 The Tulsa Scott building at the Plumas-Sierra County Fairgrounds in Quincy was transformed into an ’80s prom venue as 200-plus costumed attendees gathered to dance the night away Oct. 5.

“I’ve Had the Time of My Life,” a 21-and-up prom-themed fundraiser, was presented by Mountain Valley Parents Club, the parent-teacher organization supporting Plumas Charter School. The event raised $3,500, which will be used to purchase classroom technology at PCS’s learning centers in Quincy, Indian Valley and Chester.

The event grew out of an idea from instructional aide Lindsey Kimzey, who said she was inspired by the supremely danceable music of the ’80s era.

“The whole night felt really special,” said Kimzey. “You never know what to expect when putting on a large event like this, but our wonderful town showed up to have fun and support PCS.”

In addition to “nonstop dancing” with DJ Shane Heiman, there was a no-host bar tended by Becky Taylor and prom photos by Joanne Burgueno; all three donated their services. A silent auction loaded with donations from a long list of local businesses also supported PCS.

Maggie Hennessy, PCS office manager and event organizer, said she remembers community dances for adults that were well attended when she was growing up in Plumas County.

“For me, having that opportunity again is amazing and that it benefits Plumas Charter School is an added bonus,” said Hennessy. “Having PCS staff, parents, and community members together in one place having such an amazing time was worth all the work and planning that went into the event.”

“I’ve had so many people tell me that it was the most fun they have had in a long time,” said Kimzey, adding that plans are already underway to make the event into an annual tradition.

And the winners are …