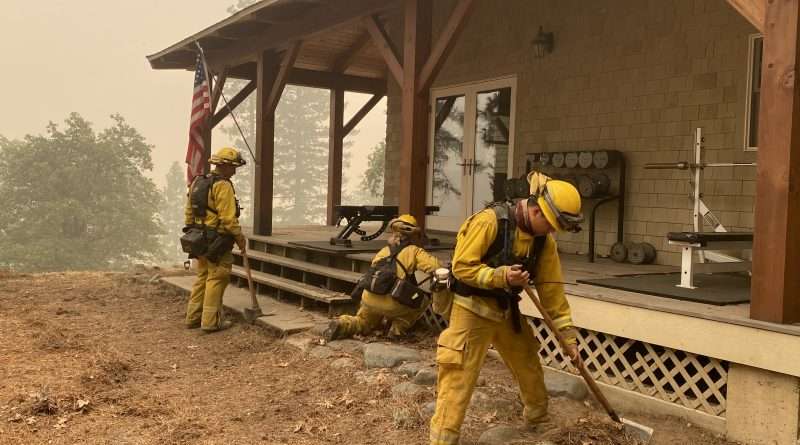 This is what structure prep looks like. Firefighters are cleaning yard debris away from a home in Indian Valley. Photo courtesy of USFS
News
August 14, 2021August 15, 2021 Editor

Residents across Plumas and Lassen counties are probably waking up this morning, Aug. 14,  wondering what was lost overnight because firefighters were battling the Dixie Fire on many fronts last night — on Diamond Mountain and North Arm in the Indian Valley and Westwood in Lassen County — to name just some areas.

Shoutout here to independent journalist and fire photographer Matthew Henderson. Must admit to spending more than a few hours driving around the fire virtually with Henderson overnight. (Side note here: Plumas News has interacted with many public information officers on the Dixie Fire and they have been accommodating and gracious, but what we are seeking repeatedly is specific information on the fire. Last night’s tour with Henderson in and around the Lake Almanor Basin as well as in Indian Valley was remarkable. It must have been reassuring for the Almanor residents to see Henderson drive along Highway 146 and through the Peninsula with no fire visible at least as of 1 a.m. Maybe the PIOs could do the same thing in various areas.)

Operations Section Chief Jake Eagle began his morning briefing by telling viewers that everything remains in its current footprint along the southern perimeter into Crescent Mills and up into Pecks Valley.

At Keddie Point and into North Arm, gusty winds of up to 50 mph challenged firefighters yesterday. “It was a very tough day in there yesterday,” Cagle said, and night resources picked up the fight when they arrived. Wind also picked up in Wilcox Valley from the thunder cells and drove the fire. Still quite a few residents were in the area; which made it chaotic, Cagle said.

Over in Lone Rock, the fires held well and in the Sheep Fire scar. Contingency lines are built around Janesville.

More thunderstorms are predicted for today, and crews could expect the same kind of fire behavior. “Another challenging day today,” Cagle said.

As for Dyer Mountain, Cagle said that they are developing a firing plan, but there was hardly any movement yesterday in that area.

Cagle will present a briefing again this evening. His briefings are videotaped and shared on the Plumas National Forest Facebook page.