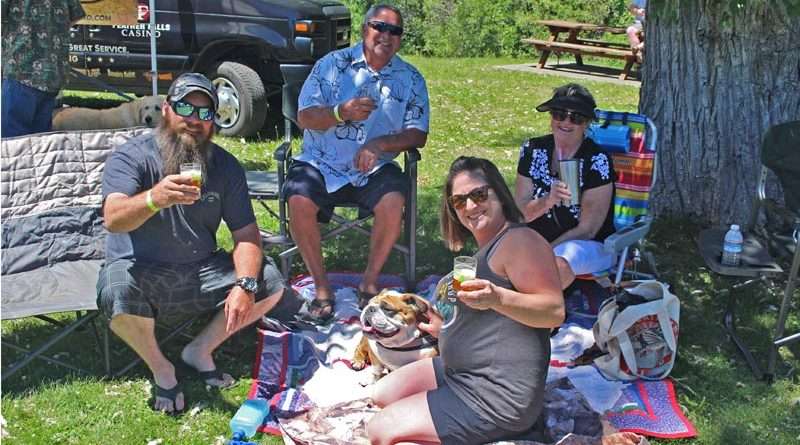 A sizable crowd of beer lovers showed to wet their whistles in the early afternoon hours for the 15th annual “A Few Brews & A Banjo” revelry June 22 for music and beer tasting alongside the North Fork of the Feather River in scenic Chester Park.

Sponsored by Plumas Arts in Quincy (plumasarts.org), the popular happening has raised funds to benefit music and arts programs at Chester schools since 2004.

The day featured not only a selection of several brands of tasty, ice-cold micro-brewed beer from local breweries, but great musical entertainment by the bands Relentless, performing an eclectic mix of their own compositions, and songs by other composers, including rock, blues, country and folk music, followed by Hot Flash, a six-piece party band from Northern California that plays everything from Chuck Berry to Prince.

As the day progressed, the party-like atmosphere encouraged attendees to engage in some impromptu dancing in front of the stage while the bands performed.

Nonalcoholic beverages were also available from Sierra Smoke Pit Barbeque, along with a number of menu items for sale like tender pulled pork sandwiches to satisfy the appetites of beer aficionados and others wanting to spend the day in the sunshine.

Volunteers from the community staffed the event, whose efforts helped make the affair a success and ensured everything ran smoothly, making it a great day of fun for individuals, couples and whole families.