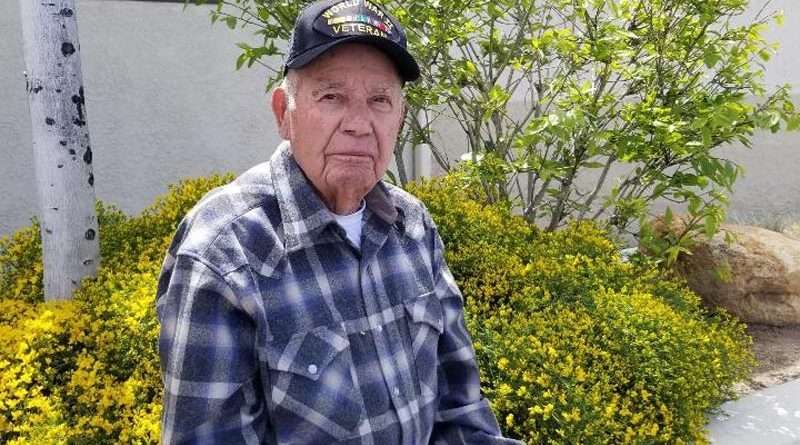 Reporters note: Joe Rogers was selected as the Lake Almanor Area “Person of the Year” from the numerous nominations submitted to the Chamber of Commerce. He will also serve as the Grand Marshal for the Chester 4th of July Parade. The following is a tribute to his long time service to the community.

Joe Rogers, a Native American of the Southern Paiute tribe, was born behind the restaurant in the tiny town of Shoshone, Inyo County, California to Jennie Howell Bow, a divorced mother of four children.

At age 10, he was taken by the Bureau of Indian Affairs and placed in the Stewart Indian School in Carson City, Nevada.

For the first time he had three solid meals a day, slept in a bed, had new clothes, and lived in a dorm with real floors rather than dirt.

After completing his basic training, Seaman Joe Rogers shipped out of San Francisco on March 14, 1943, bound for the South Pacific.

Following a layover in Sydney, Australia, on April 12, he sailed for posting on a submarine tender.

Sub tenders were basically military cargo ships fitted out to supply submarines with diesel fuel, food, torpedoes and other supplies.

These ships also had trained men and mechanical systems aboard to do repairs and refitting of sub equipment.

Sometimes these operations took place in a friendly port, like Darwin, Australia, other times they needed to rendezvous at sea.

Joe had met a lovely Northern Paiute girl, Lillian Penrose, prior to leaving for sea duty.

Married in Carson City, their union of 72 years was blessed with four children: son Richard, daughters Dollie and JoAnn, and a younger son, Eugene.

The couple lost Richard in a tragic auto accident in 1963.

In 1947 Joe and Lil made the decision to settle in Chester, and Joe was hired as a heavy equipment operator in the Collins Pine Company road department.

He worked in that position until his retirement in 1988.

He was so highly skilled at his job he trained at least two more generations of equipment operators for the company.

Thirty years ago the Chester-Lake Almanor Museum, with the assistance of Collins Pine Company and employees, was setting up a new logging exhibit.

One day Joe Rogers came rumbling down the street in a big 1066 Loader with a long piece of steel I-beam affixed to the front.

Hanging by chains from the I-beam was a 7-foot log, at least 2 1/2 feet in diameter.

To the astonishment of all, Joe wheeled up to the back door of the museum, threaded the I-beam in through the door and gently lowered the log to the floor.

Because of the difficult circumstances he endured while growing up, Joe was determined to be the very best Dad he possibly could be.

He lived up to this for his own four children, and for many other children in the Chester community.

Joe and Lil were active boosters of the Chester schools, and Joe devoted countless hours to Little League coaching, leading Scout troops and teaching children his own passion, fly-fishing.

He and Lil practiced an open-door policy at their home.

Anyone arriving at their door, especially kids, were met with warm hospitality, jovial humor and listening ears.

Joe had a knack for sensing a troubled child and was able to turn many troubled lives around by being a great mentor, great example, and giving kids the attention they needed.

The Rogers’ house and dinner table were always full.

As they grew older Lil’s health issues became very challenging and her need to have multiple dialysis treatments every week in Reno became expensive and exhaustive.

In the late 1990s, the devoted pair left their well-loved home on Lassen Avenue in Chester and moved back to her tribal home in Shurz, on the Walker River Paiute Reservation in Nevada.

Lillian, a loved and respected tribal elder, died in 2014.

Joe, at age 96, is still a kind, gentle, loving example for the community.

Truly one of Chester’s last and best of the “Greatest Generation.”