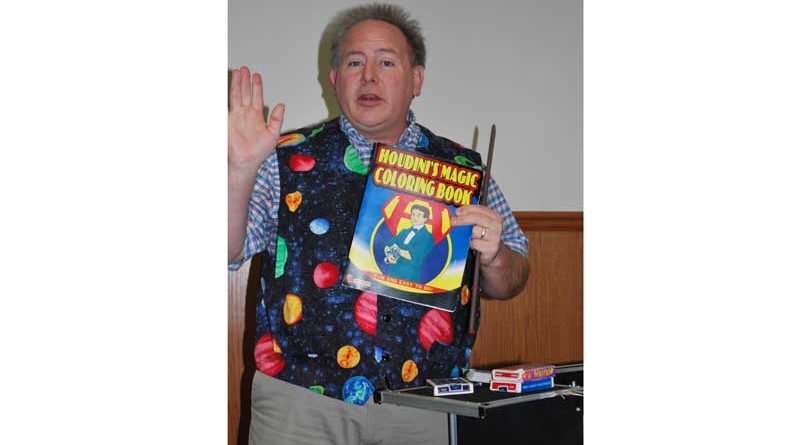 It’s the most magical time of the year — the holidays from Thanksgiving through New Years. But for one Quincy resident the magic happens all year long.

The Great Ryanaldi, alias Ryan C. Nielsen, wears many hats. He’s a father, husband, a computer teacher, a minister and a magician.

Which came first? He became a magician’s assistant when he was just 9-years-old. Mr. Magic was well known in Nielsen’s native Colorado, and Nielsen was with him to learn the tricks and help him with his shows.

But that early success ended when Mr. Magic died suddenly. “I pretty much gave up,” Nielsen said. “It made me feel sad.”

For the young Nielsen the magic he felt when he was performing with his mentor and friend left with his death. The interest was gone. It was replaced with a sadness that Nielsen didn’t shake.

It wasn’t until Nielsen was a freshman in college that he was working with some junior high students. Out of the blue someone asked him if he knew any magic. Of course he did. Did someone have a deck of cards?

He hadn’t practiced his magic trick for years, but it all came back to him as he shuffled the cards. And along with it came the joy Nielsen knew in his youth. Those tricks returned “the passion and love in my heart,” he’d felt when he worked with his old friend, he said.

Over the years Nielsen built up his repertoire of magic. That happened while he was achieving his bachelors in English literature. And then he went on to get his first master’s degree in youth and family education, followed by a master’s in divinity. And at last he earned his doctorate in youth and family ministry.

Somehow during all this education Nielsen kept up with his close-up magic. He doesn’t do stage magic designed for big audiences and large props. Close-up magic is traditionally done with card tricks and other small objects designed for smaller audiences of all ages.

Nielsen has performed for birthday parties, at Quincy High School’s prom as entertainment for a break from dancing, for a Plumas Rural Services program and other opportunities.

“I’ve never taken a computer class in my life,” he said. He’s self-taught. And years ago he learned the HTML code to create web sites.

It was while living in Orange County that Nielsen met and married his wife, Christianna. She is related to John and Laurie Sturley of Quincy, so they learned more about Plumas County. It was when Christianna interviewed for a first-grade teaching position at the Plumas Christian School that Nielsen also started teaching junior high and high school computer classes.

When PCS discontinued its junior high and high school programs, Nielsen looked around for something else to do with his expertise. A few years ago he began teaching basic Word and Excel programs for PRS. Because the reviews were so good he was able to expand those classes for a higher level and include power point design. Nielsen has also added computer instruction to his list of skills.

And if this isn’t enough, he is also the minister at the First Baptist Church in East Quincy.

Magic tricks don’t pop up during his sermons, but he has brought them out for special functions.

Nielsen said that his two daughters, Magali, 12 and Miley, 10, are old enough now to start learning some of his card tricks. He said when they were younger they didn’t really understand the tricks. Now he teaches them one trick at a time so they can perfect it.

Nielsen said that some tricks are easier than others to learn. Some only take him a half hour; others might take him weeks.

He always shows his tricks first to his wife, who’s his biggest critic and possibly biggest fan. She’s good about being honest if the trick is working the way it’s intended.

When it comes to learning magic, Nielsen said he has some old friends who share their new tricks. He also belongs to a magicians’ club, and he has sources where he can purchase new tricks.

Once he was watching “America’s Got Talent,” and one of the semi-finalists for the $1 million prize was doing his trick. He was astounded — that could have been him.

When asked about the magicians’ code of not revealing how he does his tricks, he said he asks people, “Can you keep a secret?” And when they respond he says, “So can I.”

For his younger audiences Nielsen shows them the magic trick of cutting a card in three pieces.

Showing a Queen of Diamonds he shows that it’s a whole card. He then slides into a flat device, cuts the sections in two places with imaginary scissors he takes from his magician’s case and low and behold, “Abracadabra!” the card appears in three pieces.

To complete the trick he uses his magic or imaginary tape to stick it back together. “Abracadabra!” and he shows the youngsters that the card is back in one piece.

In another card trick, he produced a deck of cards held together with a ring. Removing the ring he showed that this deck has pretty pictures on their backs.

And then there’s another trick  for young children. This one involves the famous Houdini’s magic coloring book and a wand.

He begins by asking the children if they like to color. Generally everyone is excited and raises their hands. He then waves his wand, says the magic words and shows them that all of the pictures inside the book are magically colored.

When the children protest that they didn’t get to help, he again waves the wand, says the magic words and opens the book. This time the pages are all blank.

Generally the children demand color, so he waves his magic wand, says the words and the pictures are back to their original state.