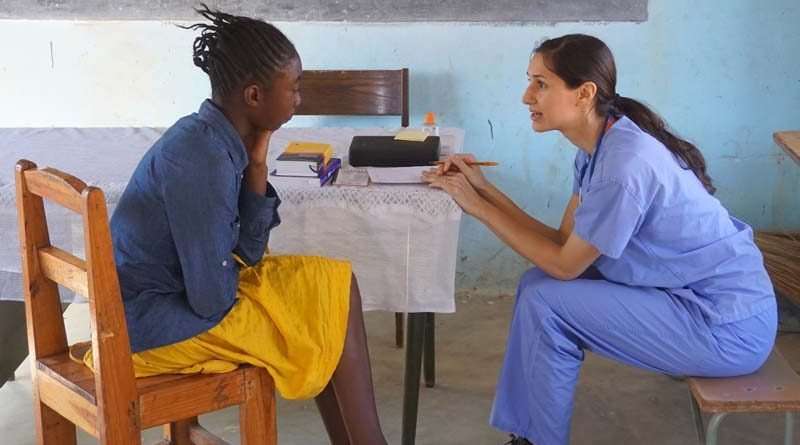 Dr. Sandefur — Lauren — works with a patient inside the simple clinic where she works in the heart of a major city.
News
May 12, 2017May 10, 2017 Victoria Metcalf, Staff Writer

With blossoming careers in medicine and the medical field in Portland, Oregon, they uprooted their lives and committed themselves to two years helping others in Zambia.

For a little background, Lauren grew up in Quincy. She wowed her parents, Nina and Dale Harris, but also others with fabulous grades and her amazing accomplishments as a violinist.

After high school graduation — at 16 — she went on to earn her bachelors in biology at Pacific Union College, Medical School at Loma Linda University in San Bernardino County. Her pediatric residency training was at Oregon Health and Science University in Portola.

It was while Lauren was living in Portland that she met and later married Travis Sandefur. Travis earned his bachelors in art history at Walla Walla University in Washington, his juris doctorate from the University of California, Los Angeles, and then his master’s in business administration from Johns Hopkins Business School in Baltimore, Maryland.

“We got to know each other while living in Portland,” Lauren said. “And were married during my residency. Travis worked as a contract negotiator at OHSU as I was finishing training.”

Both Lauren and Travis, members of the Seventh-day Adventist Church, were interested in doing some kind of international work.

“In 2015, we met with a nonprofit called Adventist Health International to see what positions were available,” Lauren said. “And (we) were told that Zambia had the biggest need for us at that particular time.”

“So we decided to go for it,” she added.

Zambia is in southern Africa with a population of 14 million. “It is a relatively peaceful country with a democratic election system,” Lauren said.

Lauren and Travis live in a house on the outskirts of the capital city of Lusaka. With an estimated population of 1.7 million people, there is a sharp contrast between the rich and the poor.

Unemployment is at 50 percent and many of the people earn money by selling goods on the street or in small roadside markets. “For those who can afford it, shopping malls are a main attraction,” Lauren said. And a typical mall includes a grocery store, clothing stores featuring South African brands, a movie theater and fast food places. Fast food in this African city generally means pizza and fried chicken. Soft serve ice cream in this sometimes hot climate is another hit.

Speaking of food, Lauren said that Zambia’s staple food is called nshima. It’s made from corn flour cooked in water to form a stiff mash. “It is typically eaten with the hands,” Lauren said, “along with stewed vegetables, and beans or fish.” Most Zambians eat this corn dish at least once a day. In some respects, it’s like corn mush early colonists relied on in the United States, or polenta, often a staple in Italian diets.

As far as restaurants are concerned, those featuring Italian, Indian or Mediterranean cuisine are popular.

“Travis and I live on the outskirts of town in a two bedroom house with two adopted cats,” Lauren said.

Their home is just a 10-minute trip to Travis’ work at an eye hospital. It’s a 30-minute journey for Lauren to reach the small clinic where she practices with another physician.

“Transportation is stressful here in Lusaka,” Laura explained. Like many third-world countries anxious to catch up with more modern places, the number of vehicles on the roadways have surpassed the infrastructure’s ability to cope with them. “So traffic congestion is very bad.”

Public transportation consists of mini buses. There are also large vans that careen in and out of traffic. Skirting red lights seems to be the norm, along with blaring horns.

Transportation guides or signs don’t seem to exist. People have to know which van they need to get on to go to a particular destination, and then the fees aren’t set. Each passenger negotiates the price — between 40 to 80 cents.

“Travis and I were lucky enough to find a used 1998 land cruiser in good condition, which we use to commute,” Lauren said. “We start off at 6:45 a.m. to avoid the worst of the traffic, which can sometimes cause a commute across town to take up to two hours.”

Work for Travis is at the Lusaka Eye Hospital where he is the administrator. This center treats eye diseases and has an eye surgery. The strong sun causes a lot of blindness and vision problems, according to Lauren. Infections and nutritional deficiencies also cause eye problems.

“I work at Lusaka Adventist Clinic, a small general medical clinic in the heart of the city,” Lauren said.

The clinic is in an old house and consists of a waiting room, nurses’ room, three exam rooms, laboratory, pharmacy and an x-ray room.

“I work as a pediatrician, and the doctor I work with is a family medicine physician,” she said.

Together they see 30 to 40 patients every day. The workweek is Sunday through Friday.

“Luckily, there are plenty of public holidays here in Zambia — usually one or two each month.”

Working in the clinic is nothing like what Lauren might have become accustomed to in Oregon. “We are blessed to have basic lab equipment and an x-ray machine to do the majority of basic medical tests,” she explained. “But it is difficult to do specialized medical tests.”

Lauren said they do have the basic medications to prescribe to patients, but expensive or rare medications are difficult, if not impossible to get.

“The lack of specialist testing and treatment can be frustrating, especially because I was used to working in a highly specialized children’s hospital during my residency.”

Climate, development, living conditions and other factors all play a part in the kinds of diseases Lauren sees in Zambia as opposed to those more common in the United States.

Malaria, caused by mosquitoes, is very common, although it’s more likely in rural villages than in the city. Tuberculosis, rare here in the U.S., is also quite common, as is HIV/AIDS.

“There are more tropical diseases such as typhoid fever, cholera, intestinal worms and other parasites,” she said.

Diseases more commonly associated with western countries —Europe and the United States — including diabetes and hypertension are on the rise, Lauren explained.

“The country of Zambia has many beautiful natural treasures,” she said. Victoria Falls, one of the outstanding wonders of the world, is on the southern border of Zambia and its neighboring country of Zimbabwe.

Lauren said they’ve found time to visit Victoria Falls and some of the national parks. They’ve also traveled through South Africa. “Travel can be expensive, especially air travel within Zambia and Africa,” Lauren said. Usually road trips are more affordable, although the price of fuel is relatively high.

When venturing into the rural areas of the country, it is important to take precautions against malaria. “We always sleep under a mosquito net — even at home — and use bug spray liberally.”

“Travis and I really enjoy living and working here in Zambia,” Lauren said. “We feel lucky to live in such a beautiful place where people are generally friendly, welcoming and laid-back”

She said that it took time for them to adjust to the culture differences. “And we miss our families and friends back home.”

Lauren and Travis arrived in Zambia in January 2016. They are committed to staying for two years. “After that, we plan to move back to the U.S., although haven’t decided on an exact location just yet.”

Zambia is home to Victoria Falls, one of the seven natural wonders of the world.

It’s considered to be both in height and width the largest waterfalls in the world.

Until 1964, Zambia was known as Northern Rhodesia.

Along with its national parks, Zambia has five major lakes, three large rivers, 17 waterfalls, including Victoria Falls, and various wetlands. Nineteenth-century Scottish missionary explorer David Livingstone is credited with putting the country on the map at least in the eyes of western cultures. He’s the one who first drew attention to Lake Tanganyika as he sought a source for the Nile.

One of its major rivers, the Zambezi, is what gave the country its name.

Although Zambia has its major cities, such as Lasaka, it also still has major portions of the country that remain relatively wild.

Tourism makes a significant contribution to Zambia’s economy. People from all over the world are attracted to primarily the country’s richness in wildlife. There are 20 national parks, 36 game management areas and one bird sanctuary. Various organizations work to protect wildlife and birds as well as the land.

Zambia is home to 72 ethnic groups that still predominately live in rural areas, according to Zambia’s official web site.

The main tribes include the Lozi, the Bemba, the Ngoni, the Tonga, the Luvale and the Kaonde.

Its culture seems to become a blend of these many tribes, although many of the rural tribes have retained their indigenous and traditional customs.

The country has also attracted Asian populations including those from China and India.

Zambia is about the size of France, the Netherlands, Belgium and Switzerland combined.

According to Zambia’s website, the country tends to be flat, with small hills, although there are mountain ridges that reach 6,000 to 7,000 feet.

Besides the Tanganyika, there are two other major lakes, the Bangweulu and the Mweru. Lake Kariba is actually a man-made lake and is the largest in Africa and second largest in the world.

Zambia has three climates. From May through August, it is cool and dry. From September to November, it’s hot and dry and from December to April, it’s warm and wet.

At the height of the wet season, frequent heavy rains and thunderstorms are common. These are followed by days of sunshine and the combination creates lush, fast-growing vegetation.