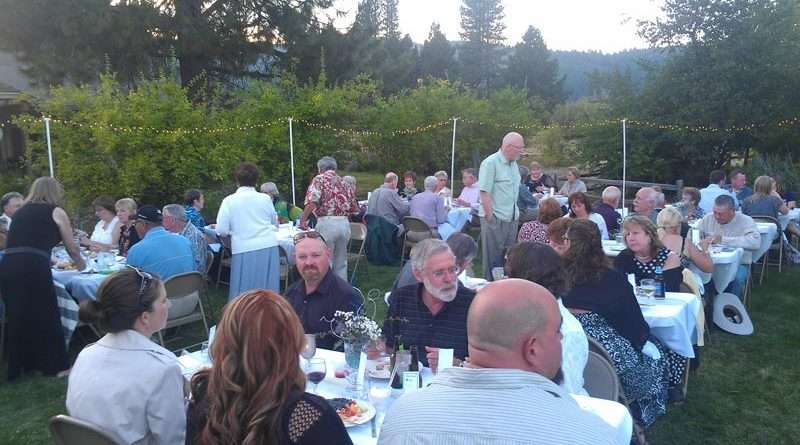 Bill and Sue Wickman’s backyard has been the site of Starry Mountain Nights since its inception, but after nine years the event is moving to a new venue. Photos submitted
News
August 21, 2019 Debra Moore, Managing Editor

The event lasts a few hours; the preparations take months, but for Bill and Sue Wickman the effort is worth it.

For nine years the couple has hosted the annual fundraiser Starry Mountain Nights in their Quincy backyard just a stone’s throw from the event’s beneficiary, the Plumas Hospital District Foundation.

The Wickmans served appetizers, a buffet dinner and desserts under their twinkling lights, raising from $8,000 to $17,000 annually in the process.

Bill Wickman has served on the hospital district’s board of trustees for more than a decade and is also a member of the Foundation, a fundraising group that purchases equipment and pays for other improvements for the hospital campus.

“When I first got on the foundation board, we didn’t have a fundraiser,” Bill recalled. “We talked about different options, different venues, and then I thought about our yard.”

The Wickmans’ yard was no stranger to parties. “We have done numerous friends’ weddings so we knew our limitations and our capabilities,” Sue said.

That first year they served barbecued chicken and tri-tip with a variety of sides, but Bill quickly discovered that chicken required too much time over a hot barbecue, and the menu was honed over the years — but always included tri-tip and their popular wedding potatoes.

The Wickmans began shopping a month before the big night, with food preparation beginning about four days before the event. However, it was the yard that took careful preparation to ensure that flowers bloomed and bushes manicured to be in prime shape for the big event. “The yard took more time; I would start a month before,” Bill said.

Bill and Sue relied on Feather River College sports teams to help with the table setup and take down, and a group of friends who assisted with everything else, including Rick and Vonnie Becker; Jim and Squeak Crain, John and Kitty Gay and Charlie and Jill Brown.

And while the Wickmans enjoyed their nine-year run, the event this year will be at the home of Dr. Jeff Kepple and wife Tracy.

The venue won’t be the only change. This year the event will be catered by Young’s Market in Taylorsville.

During the hospital district’s August meeting, fellow board members and hospital officials thanked the Wickmans for their nine years of hosting the popular fundraiser.

And though it won’t be in their backyard they are offering a strong assist to the Kepples as Starry Mountain Nights celebrates 10 years this Saturday, Aug. 24.