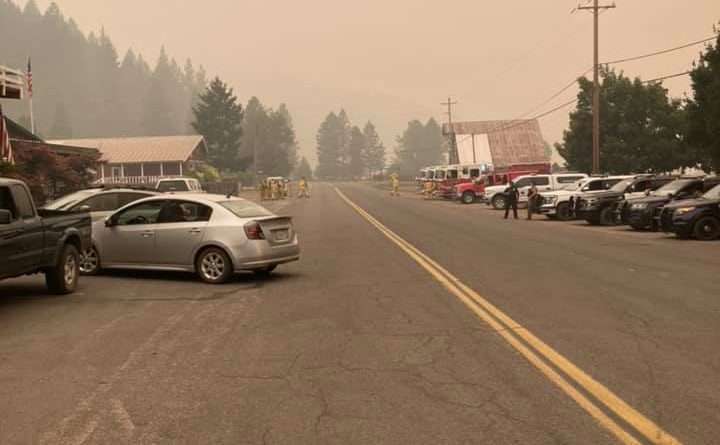 The Dixie and Fly fires, which have now merged continued their march on Indian Valley (albeit more slowly today) forcing more mandatory evacuations, while residents of the East Shore of Lake Almanor evacuated this afternoon and Highway 147 closed.

Though it could have been worse. Incident Meteorologist Julia Ruthford said that today’s inversion shaded and cooled the fire. Winds were calmer. And though the fire advanced, it was at a slower pace. “The smoke turned out to be our friend,” Ruthford said. This was reflected in today’s reported acreage.

As of this evening, July 25, the Dixie Fire is reported to be at 192,849 acres (an increase of just over 2,000 acres from this morning) and remains 21 percent contained. The fire’s perimeter is roughly 82 miles. The Dixie and Fly fires have merged, and tonight’s evening briefing was the last time they will be mentioned separately.

There are 10,721 structures threatened, and it is known that 16 structures and 6 other minor structures have been destroyed – though that number will increase as damage assessment teams access the burned areas. During tonight’s briefing it was learned that 249 parcels had been inspected thus far in the Canyon, with the 16 reported losses. Structures were lost in Indian Falls last night, but those numbers are not officially known.

This is the latest information released for the Dixie Fire by the incident command team tonight, July 25:

While today’s inversion helped the fire fight, it’s not expected to continue. Tomorrow southwest winds are expected to clear the smoke sometime around midday, which will bring the chance to see larger cumulus clouds. “It’s another day with pretty critical conditions,” Ruthford said, with the potential for lightning and gusty winds. There is also the potential for thunderstorms in the afternoon and evening, though most are expected to remain east of the fire. The second half of the week is expected to be warmer, but the threat of thunderstorms remain.

West zone Operations Section Chief Mike Wink  presented the evening update, which always begins with the bottom of the fire – no change there, and no change in the Highway 70 corridor to Belden.

There were some control issues on the lower left flank, but they were addressed and going up the left flank, there was a lot of effort put into a secondary line to keep the fire out of Butte Meadows, Philbrook and Jonesville. A spot fire was picked up by air attack up.

In the Canyon Dam area, firing operations continue to build depth to the fire. Wink reported that crews were able to go further down Humboldt Road with backfire so that the fire would run into reduced fuels. If the work can continue down Humboldt Road, the fire could get this boxed in there.

Wink answered a question about the possibility of spot fires on the Lake Almanor peninsula and he responded that the back burns were being conducted to reduce the fuel so that when the fire hit the burned out area, it would slow and not burn so hot that it would produce embers that could reach the peninsula.

East Zone Operations Section Chief John Goss said that overall that thick layer of smoke lessened the fire activity. “The bulk of the activity was in the Bucks Lake Wilderness, “ he said, though the fire flanked and didn’t proceed down toward Bucks.

He said that in the Highway 70 corridor, the line held from Rock Creek to Bucks Lake.

Goss said that the Fly Fire did reach the top of Mount Hough last night and crews are  preparing for a potential burnout  to keep it from going east and threatening Quincy.

There was little movement from the Indian Falls portion of the incident and crews built primary lines and prepped within Taylorsville, Crescent Mills and Greenville. The fire is reported to be 4 miles from Crescent Mills.

Deputy Chandler Peay, speaking on behalf of the Plumas County Sheriff’s Office, said that more orders and warnings went into place today. “The entire Indian Valley is now under an evacuation order,” Peay said. He said that the series of warnings issued later in the afternoon came because they were adjacent to a mandatory zone with approaching fire.

In response to the myriad questions the office received regarding Quincy, Peay said, “Expecting no mandatory evacuation order for Quincy. “

As to questions about Chester, he said there is no indication that Chester will go mandatory, but that could change.

“Just because you’re in a warning zone, doesn’t mean that we expect you to be evacuated,” Peay said, “but we want you to be ready.” Those needing assistance evacuating can call 283-6414 for non-medical transport. Peay thanked all of the law enforcement personnel from out of the county who have responded to this incident.

Incident Commander Mike Minton said, “Evacuation orders and warnings are in place for a particular reason. The number one goal is the protection of human life.” He encouraged residents to heed the orders.

When will Highway 70 be reopened? Crews are in there trying to make things safe. There are hazard trees to be removed as well as wires to be removed and replaced. “Multiple things are happening at once; still a lot of fire suppression out there,” Wink said.

Plumas National Forest Supervisor Chris Carlton said that the past 24 hours had been a little bit of a mixed day. “It started with the fires coming together here at the Wye,” he said. “We’ve lost structures. People have lost homes – these are real impacts in our community.”

He said people might wonder how “we are going to get past this, but then I pause and I take a look at the numbers,” and he listed a number of resources that are on the fire. “We are starting to see the impact of all of that work,” he said.