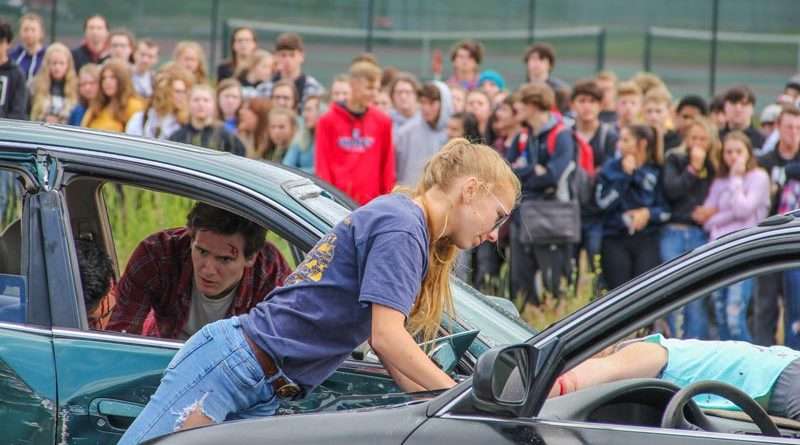 As the driver designated to cause the mock collision in the Every 15 Minutes simulation sponsored by the CHP at Quincy Junior-Senior High May 22, Sam Langdale, left, searches frantically to see if his friend and passenger is badly hurt. Driver Baylee Ray climbs out of her car to check on her critically injured friend and passenger Meghan Cahill. Photos by Roni Java
News
May 31, 2019May 31, 2019 Roni Java, Staff Writer

The eerie silence of the pretend crash site was broken by the sound of real sirens, CHP radios and ambulance vehicles, fire trucks and law enforcement cruisers arriving at a mock two-car pileup on Quincy Junction Road on Wednesday morning, May 22.

“What have I done, oh my God!” said Quincy Junior-Senior High School student Sam Langdale, climbing out of the simulated wreck before an audience of some 200 ninth- through 12th-grade QJSHS classmates who stood watching as the “Every 15 Minutes” exercise unfolded.

He was covered in movie-makeup blood. So were three other students taking part in the mock accident drill that presented a scenario of friends out having fun but they’d “had” too much alcohol to drink.

Circling above the flattened grass of the playing fields along the cordoned-off roadway, a California Highway Patrol helicopter prepared to land and provide real-life flight assistance and 911 dispatches could be heard throughout the site.

Nearby, the Grim Reaper made not a sound and walked softly among the emergency personnel working intently to assess the pretend-reality scene of wounded students. He carried two long-stemmed red roses, one for each student who would “die” during the presentation.

Student Langdale was “booked” on felony driving under the influence and made a real trip to jail while the crash scene was cleaned up.

The drill unfolded before the school’s upperclassmen as part of a nationwide program sponsored by the CHP in California and local emergency responders. “Every 15 Minutes” challenges students to think about drinking, driving, personal safety, the responsibility of making mature decisions and the impact their decisions have on family, friends, their community and many others.

“This event brings some ‘realness’ to it,” said Lt. Erik Egide, commander of the Quincy area CHP, who stood on the sidelines while his officers carried out the authentic, reality-based drill.

“Everybody here on site, with all the sirens and the equipment and personnel,” Lt. Egide continued, “this is what they do every day. These are our actual steps (protocols). Seeing it up close like this, hopefully the event will impact the choices of our young people. It’s good to have the involvement of the community to put this event together, it shows a vested interest in the safety of our young drivers.”

QJSHS students Dominic Rinetti and Meghan Cahill played the part of two fatally injured passengers in the accident simulation. Baylee Ray and Sam Langdale, both of whom were scripted to survive, played the two drivers.

After the shock of the mock accident drill, other students were abruptly pulled from class for the rest of the day every 15 minutes and designated to be victims. The mock “deceased” students spent the night away from their families (staying at the Greenhorn Ranch and writing farewell letters to their parents) to approximate what it would feel like to have or be the loved one suddenly snatched away from life.

“The value that we hope the students get from this activity is the importance of acknowledging the fact that alcohol doesn’t just hurt those who drink, but too often the innocent victims as well,” said QJSHS Principal Erin Mongiello after the emotional event was conducted at her campus.

She added, “It teaches the importance of being safe on the road and also making good decisions. Students experience firsthand how their actions affect the lives of so many others.”

The goal of the Every 15 Minutes exercise, which originated in Canada, is to reduce alcohol-related incidents among youth. Partnerships of law enforcement, local hospitals, emergency medical responders, schools, businesses and service clubs validate the importance of working together to ensure a healthy community.

With funding available from the California Office of Traffic Safety, the CHP provides mini-grants to schools and organizations statewide to implement the Every 15 Minutes program.

Organizers say students “know the intellectual statistics,” so the event is designed to be dramatic and impactful to remind teens about the choices they have.

Day two of the simulation event called for a realistic “eulogy” assembly in the Quincy High gym.

Students, parents, teachers, volunteers and emergency responders attended and experienced some quite real emotions during the mock memorial. For many, it was not a stretch to feel what it would be like if they ever really lost a child, classmate, friend or sibling in this manner. The suddenness, the staging, props and role-playing brought it all home.

Students talked about the impact of the experience and parent Consuelo Belcher said, through tears, “Dominic (Rinetti), my world came crashing down when I was notified of your ‘death.’ Nothing could have prepared me for that moment. I couldn’t remember the last thing I had said to you. Did I tell you I loved you? You are my everything. I’m completely heartbroken. I’m angry. I thought I taught you better; never get into a car with someone who’s been drinking. I feel like a failure. I’d give anything to kiss you and tell you I love you one more time.”

Plumas County District Attorney David Hollister concluded the program with a memorable case he wishes he had never had to try, a DUI-caused death many years ago of a small Oakland boy who was the rock of his family.

“I’m asking you all to do what’s right, watch out for each other,” Hollister said.

Asked later how the Every 15 Minutes exercises had affected them, several students said it was “traumatic” and they would remember this for a long time. Even with all the imaginary violence and tragedy they see today in movies and on TV, this drill felt real.

Seth Hardesty, a ninth-grader, said, “This was scary stuff. It shows how easy it can be to happen. My uncle died in a car accident a few years ago. It kind of makes me scared to drive. I guess I’d tell other kids to be smart, don’t be drinking or texting and driving. Have another friend drive you home.”

QJSHS students who participated in this year’s Every 15 Minutes program and served in leadership roles included:

2019 Community Supporters for Every 15 Minutes