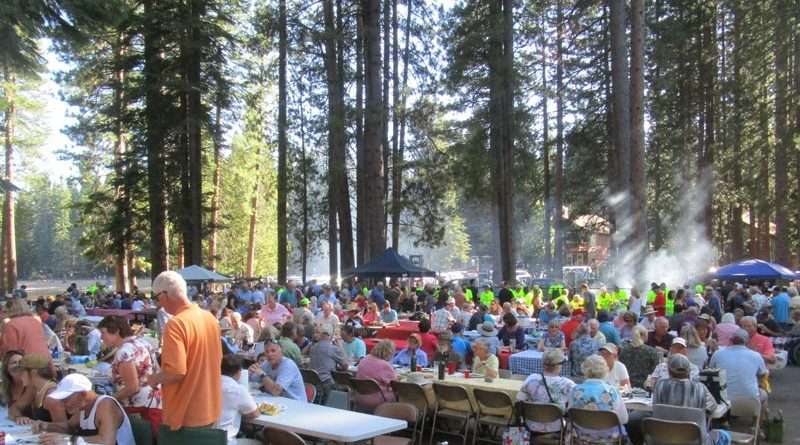 These are just a few of the 650-plus attendees at the 27th annual Almanor Fishing Association’s Family BBQ and Fundraiser on July 27. New York steaks, Caesar salad, and chili were the fare for the evening, but renewed acquaintances, good conversation and lots of fun and games were the order of the day. Photos by Gregg Scott
News
August 7, 2019August 8, 2019 Gregg Scott, Staff Writer

Once again the members of the Almanor Fishing Association (AFA) have stepped up to the proverbial plate and accomplished what many may have thought to be impossible.

On Saturday, July 27, the AFA held its 27th annual Family BBQ and Fundraiser at the Rec. 1 picnic facility in the Lake Almanor Country Club.

The challenge for event organizers was to serve up, in a timely manner, the usual tasty dinner of New York steak, Caesar salad, chili and garlic bread to the 652 people who purchased tickets.

There were an estimated 75 dedicated members and volunteers that went about their assignments as if it were just a normal day on the treadmill and within about 80 minutes the entire crowd was enjoying dinner, beverages and some were already headed to the cookie table.

Please don’t misunderstand, nobody waited in line for 80 minutes.

At least one fellow kept himself occupied walking around taking photos, while others at his table enjoyed good conversation and some adult beverages.

Some folks perused the tables of general and bonus drawing prizes before getting into the chow line.

The lines moved right along and a good guess would be that it took about 10 to 15 minutes for most people to get through the line.

One thing for sure, if a hitch did arise it was very easy to keep track of the volunteer staff since they all wore their chartreuse yellow “PROUD AFA VOLUNTEER” shirts, and they would take care of things post haste.

The dinner was just the beginning of the festivities for the evening as the action moved to the various drawings for door prizes, card game and silent auction.

Besides having a large poster with the donors’ names listed, AFA President John Crotty named and offered a personal thank you to each of the 25 cash donors and over 80 businesses and individuals that donated prizes, including the Lake Almanor Country Club which donated the use of the Rec. 1 picnic area.

There were numerous comments about the generous support for AFA from the community and local businesses.

One attendee replied, “It makes sense; they do a lot of good things for the community and the lake.”

How true! As this reporter has covered some of the AFA events this last year, the dedication of the members is amazing.

They hosted almost a 100 veterans for a day of fishing and a tribute barbeque in June.

They helped over a hundred local kids experience the joys of fishing as the partnered with the UDSA Forest Service for a Kids Fishing Derby and helped the California Department of Fish and Wildlife with their fourth grade Year of the Trout program.

Don’t forget the work crew that arrived at the Feather River College trout hatchery with hand tools and yards of gravel to provide a much needed clean up and maintenance.

Since last fall they have organized and partnered with several agencies to release well over 100,000 fish into Lake Almanor with roughly 50,000 of those being fed all winter in the Hamilton Branch holding pens prior to their release this spring.

These figures mean that many members carried roughly 80 pounds of food down the long flight of stairs and out to the pens every day (with a few exceptions due to weather) for 189 days, shoveled snow off the pens and fed the 50,000 trout to insure maximum growth.

During that time span, only 210 trout were lost.

Currently members are caring for another host of brown trout fry at the Chester High “Almanor Research Institute” facility that ultimately will be transferred to the Hamilton Branch pens.

Kudos to the AFA and its members for a super successful Family BBQ.