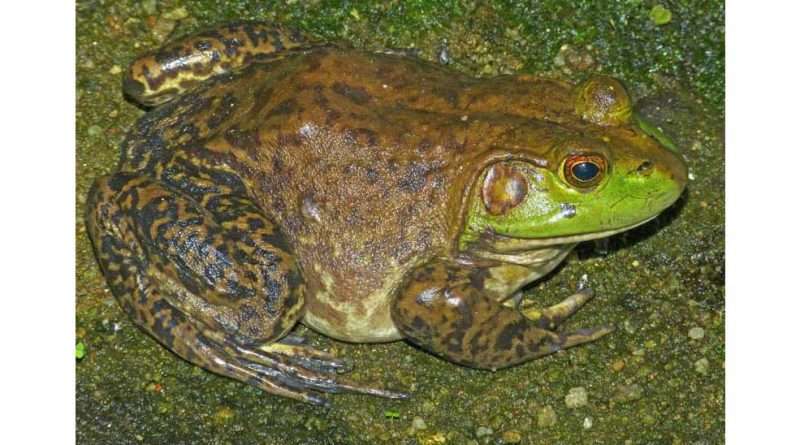 An unwelcome visitor from “Back East” has taken up residence in the American Valley and it may be tricky to get them to pack up and leave.

As waters were receding from record precipitation last winter, Amber Mouser, fishery specialist with California Fish and Wildlife, said she came across an eastern American bullfrog in the middle of a pasture.

“It was the first time I have ever seen one,” she said. “It was pretty parched, as the meadow was drying up and frogs need to keep their skin wet in order to breath.”

Mouser said she found the bullfrog close to Greenhorn Creek between Lee and Chandler roads.

She said she didn’t know where the bullfrog came from, but that it may have been in a stream or pool that got flooded out during high water and was left stranded in the middle of the pasture.

Why is this important?

At first consideration, what’s so dreadful about seeing an American Bullfrog in American Valley?

First, Mouser said, although American bullfrogs are native to the eastern United States, they are not native to California.

All species have a whole web of factors that keep their numbers in check in their native territory. These include predators, competing species, parasites and diseases.

At the same time, other species in a species’ native territory have had time to adapt to the presence of that species, so that population levels may fluctuate, but species rarely go extinct.

However, when you take a species from its native territory and drop it into a new territory, that species may have a distinct advantage because many of its predators, competing species, parasites and diseases are left behind.

The native species in the introduced species’ new territory have a distinct disadvantage. They still have their hosts of predators, competitors, parasites and diseases, keeping them in check, but they are totally unprepared for the new species.

Leslie Mink, project manager with Plumas Corporation, said of the bullfrogs, “They are non-native and threaten our local native turtles and threatened yellow-legged frogs that occur here. They are big and eat the tadpoles and young turtles.”

If American bullfrogs are moving into the American Valley they are probably also present or moving into other areas of the county.

What can be done now?

Unfortunately, as with all introduced and invasive species, plants, animals or diseases, once they get established it is almost impossible to get rid of them. As was said in the movie, “Jurassic Park,” Life will find a way. In this case, a species naturally spreads itself around.

Isaac Chellman, with the California Department of Fish and Wildlife, said that Yosemite National Park managed to get rid of American Bullfrogs along the Merced River in Yosemite Valley.

However, he said it took a lot of time, effort and money to eradicate American bullfrogs in that restricted area and the park must continually eradicate bullfrogs as they will find their way back into the area.

Chellman said the only way to rid an area of American bullfrogs, or any other non-native species, plant or animal, is to not release them in the first place.

American bullfrogs are native to the eastern and midwestern United States and southeast Canada. They were introduced into the West in the 1910s by commercial frog farmers and grown for their large meaty legs.

A 2014 California Fish and Wildlife report stated that approximately 2 million live bullfrogs were still being imported annually into California for food at that time.

American bullfrogs are now established throughout much of the western United States, southwestern Canada and other areas worldwide.

Mink has another idea about how to reduce the harm caused by bullfrogs to native species. As it currently stands, a person needs a fishing license to “shoot or jig the little buggers.”

Mink suggested that it might be good if the state allowed everyone to take bullfrogs without a fishing license. She is thinking of going to the Plumas County Fish and Wildlife Commission and asking them to write a letter to CFW to allow anyone, anytime to harvest bullfrogs.

California regulations state that all amphibians must be taken only by hand, hand-held dip net, or hook and line, except bullfrogs.

However, since there are protected frog species that may coexist with bullfrogs, California Fish and Wildlife cautions people to be sure that all frogs have been correctly identified.

More information on American bullfrogs (Lithobates catesbeianus), yellow-legged frogs (Rana boylii) and other amphibians and reptiles in California can be found at the CaliforniaHerps website by searching “Calherps.”

– Adult American bullfrogs have voracious appetites and will eat anything they can fit into their mouths, including invertebrates, birds, bats, rodents, frogs, newts, lizards, snakes and turtles. Bullfrog tadpoles will eat the tadpoles of other frog species.

– All life stages of bullfrogs prey upon and are able to out-compete native frogs and other aquatic species.

– Additionally, bullfrogs are a known carrier of chytrid fungus, which causes the potentially fatal skin disease in frogs called chytridiomycosis.

– Chytridiomycosis is believed to be a leading cause of the decline of native amphibian populations all over the world and responsible for the extinction of over 100 species since the 1970s.

– Male bullfrogs can be distinguished from females by their smaller body size, yellow throat and very large tympanums (to announce their territories) that are larger than their eyes. Males also have a deep, low-pitched mating calls bellowed during the breeding season.

– Bullfrog tadpoles are green to yellow in color with small, dark spots on their backs, and can grow up to 6 inches in length.

If you observe this species in California