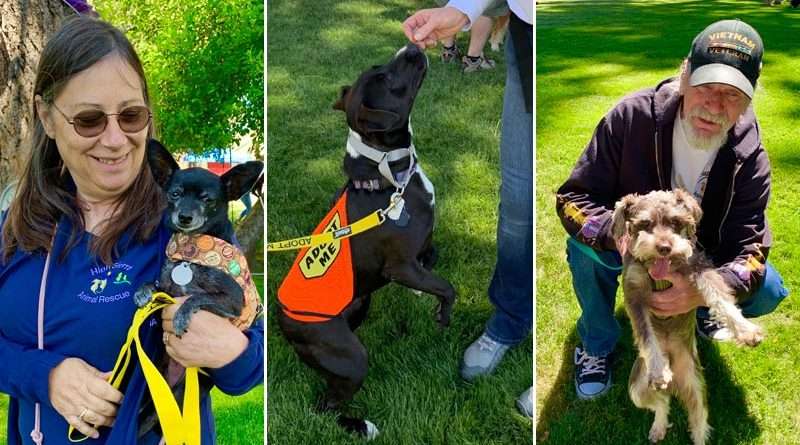 (Left) Linus felt safe in the arms of his foster mom, High Sierra Animal Rescue Board member Stephanie Stathes, at the Paws on Parade event held on Saturday, June 22, at Graeagle Park. Photos submitted (Center) Sweet Maggie sits up gently for a treat. She’s 3 years old, gentle, and a bit shy. Maggie was left in the overnight drop box at the Lassen County shelter. She is looking for the love and security that a home of her own will bring. (Right) Scooter Brown Flops-A-Lot hit the jackpot with his adopters Cliff and Helen Dyson. Helen works at High Sierra Animal Rescue and immediately stepped in to adopt Floppy when she heard he was looking for a new home. Though he’s a little floppy, life is a joy as far as he and his family are concerned.
News
July 3, 2019July 8, 2019 Linda Satchwell, Staff Writer

High Sierra Animal Rescue (HSAR) held its fifth annual Paws on Parade event Saturday, June 22. Graeagle Park was filled with enthusiastic dog owners and their pups, many of whom had been adopted previously from HSAR.

High Sierra volunteers walked or carried dogs sporting “Adopt Me” jackets or leashes. The volunteers knew the history of the various dogs hoping to find great, new homes, and they were clearly invested in helping them get there. Perhaps the highlight of the day was learning the stories of some of these dogs from the volunteers who love them.

High Sierra Board member Stephanie Stathes was holding Linus, a diminutive 8 1/2 year old Chihuahua mix. He’d been found in an abandoned apartment with four other dogs after their owners were evicted. His teeth were terrible, and High Sierra paid for his dental surgery. In the end, all of his teeth had to be pulled, which only adds to his charm when his tongue sneaks out the side of this mouth.

According to Stathes, Linus has no problem eating.He is very well behaved, even stoic, which may be due to all he’s been through. He’s the kind of dog who will be very loyal to the person who adopts him.Linus had been waiting in the kennels at High Sierra for seven months for someone to realize what a gem he is and take him home.

He had several strikes against him — he’s older, he’s had medical issues (now resolved), and he’s black; black dogs historically get adopted at a much lower rate than other colors. Stathes has recently been fostering Linus, and just a few days after Paws on Parade, someone who met him at the event was going to foster Linus with the hope of adopting him permanently. The crew at High Sierra has high hopes that Linus is finally going home for good.

Maggie, a 3-year-old medium- sized mixed breed dog, was left in the overnight drop box at the Lassen County shelter. For a sensitive and shy girl, this must have been especially traumatic. Surprisingly, her former owners left her shot records with her, so she must have been cared for at one time. She had traveled all the way from Chico, but other than that, her story is a mystery.

Maggie is small and compact, with a beautiful, sensitive face. “Big dog” people out there who would appreciate her more manageable size should consider coming to meet her.

Maggie is shy, but was trying very hard to be brave at the Paws on Parade event. She greeted all the small and large dogs that came up to meet her with gentleness and grace. Notably, five High Sierra volunteers and board members came by to pet Maggie while I was visiting with her. Each one remarked on how well she was doing in what could have been a rather overwhelming environment for her. They all knew her history and personality, and they were clearly invested in her success.

Maggie tugs at your heartstrings. She’s so obviously looking for someone to love her and take her home where she can relax and feel safe. She’s been in the kennels at High Sierra fortwo months, and she’s hoping someone will see her here and come to meet her.

In addition, there were lots of happy dogs just out for a day of fun, many of whom had been adopted in years past and were attending the event with their families. These dogs were well adjusted, happy, and very bonded with their adopters. Each person was proud to tell me the story of their dog and show how far they’d come.

A particularly bright example was Scooter Brown Flops-A-Lot, a cute little schnauzer who was attending the event with his adopters Cliff and HelenDyson. Floppy has a neurological disorder that causes him to flop when he walks. He was in HSAR’s boarding kennel, and his owner who had already had a heart attack, was soon to undergo surgery. Her doctor said she wouldn’t be able to take care of Floppy. She let High Sierra staff know she was going to look for a new home for him, but Dyson, who both works and volunteers at the rescue already had her eye on him.

“I wasn’t going to let him go anywhere,” she said. These days, Floppy flops a lot less with the exercise and care he gets from his devoted family. To say they’re proud of him is an understatement.

Events like Paws on Parade raise both funds and awareness of all that High Sierra Animal Rescue does. “It’s our 20th year saving lives and, while fundraisers like Paws on Parade are important community events, they can’t raise enough funds to cover our expenses,” said Executive Director Heidi Rose. “That’s why it’s so important our community support out work through donations and our monthly giving program, Guardians of High Sierra Animal Rescue.”

Further, long-time board member Doug Hart made it clear that HSAR is a private rescue — it receives no funding from Plumas County — and raising much-needed funds is always a struggle. Hart noted that during their 20 years in existence, High Sierra has adopted out over 4,000 animals.

Rose added, “We also have a number of volunteer and foster opportunities which can help us cut costs and save more lives.” In fact, HSAR has an active and growing foster program. Fosters are especially helpful for special needs dogs or dogs that are having a hard time in the kennel environment.

Hart said that there are many areas where they look to volunteers for help — everything from walking and socializing dogs to doing yard work and building maintenance. The building is now 20 years old, and one of the air conditioning units went out just the other day, Hart added.

All Plumas County dogs being relinquished or coming in as strays must first go to the county animal shelter in Quincy. From there, High Sierra is the dogs’ primary safe haven as they decompress, are behaviorally assessed, fully vetted (spay/neuter, all vaccines, and a microchip), get necessary training and socialization, and wait for the right adopter to find them.

Hart said that the county shelter especially relies on High Sierra to take pregnant moms and puppies, as they don’t do well in the shelter and are prone to get sick there. Hart recalled that his own dog Fancy, now 5, came in at three weeks with no mother in sight. He took her home and hand fed her every two hours around the clock.

The rescue also tries to take senior dogs that are harder to adopt out. HSAR has a Seniors For Seniorsprogram that encourages older residents to adopt older dogs by discounting their adoption fees. Vet costs, including spay/neuter and vaccines, are getting ever more expensive, said Hart, another reason public donations are so essential.

If you’d like to drop by HSAR’s rescue to visit with some of the dogs and perhaps find a new family member, it’s located at 103 Meadowridge Lane in Portola off Highway 70. The office is open to the public Monday through Saturday, from 10 a.m. to 4 p.m. You can also check out adoptable dogs on their website: www.highsierraanimalrescue.org.

For more information, to volunteer, foster or donate, call 832-4727, or visit its website.