Ann Roper, a 64-year resident of Westwood, passed away peacefully at the age of 85 years old on November 3, 2021, at Seneca Long-Term Care in Chester, with her children by her side. 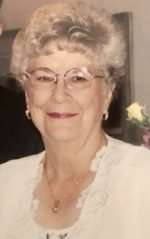 Anna Belle (her given name) was born on October 13, 1936, to Lawrence (“Doc”) and Mentle Scrudder in Paris, Arkansas.

Ann was preceded in death by her husband of 60 years, Roger Roper, her sister (Edelda), her brothers (W.H. and Amos) and her son-in-law, Darrel Garcia.

She is survived by her children, Rhonda McKinney (Vern) of Antelope, Janet Garcia of Chico, and Dan (Gina) of Payette, Idaho. She is also survived by her seven grandchildren, Scott McKinney (Andrea) of Lincoln, Lori Heppner (Aaron) of Elverta, CA, Nick Garcia of Chico, Daniel Garcia (Megan) of Chico, Amanda Shepard (Easton) of Silverdale, Washington, Sarah Weeks of Payette, Idaho, and Caden Roper (currently serving abroad in the military) and her six great-grandchildren, Ella, Evelyn, Liam, Hannah, Ash and Rowen.

Ann, the youngest of four children, grew up in Paris, Arkansas, and the surrounding area. Her father passed away when she was 15 years old. While attending and graduating from high school, she worked at a car dealership, a soda fountain, and an insurance agency to supplement her mother’s income.

It was at that soda fountain job where Roger found her upon his return from the Korean War in 1954. They dated for a while, eloped, and were married in Paris, Arkansas, on October 4, 1954.

Their honeymoon was a sightseeing trip out west where Roger introduced her to the beautiful mountains of Northern California. They set up housekeeping in Graeagle where Roger had been working at the lumber mill prior to their marriage. Ann experienced her first double-digit feet of snow that winter!

Ann and Roger eventually moved to Westwood where they raised their three children. She was a very successful insurance agent with Murray & Edwards Insurance for 35 years and after retirement, worked for a few years at the Westwood Community Services District. Through the years, Ann was active in the PTA, Girl Scouts and church.

Ann loved to make quilts for her grandchildren as well as for new babies in Westwood. She found much peace in quilting and sewing. She was an immaculate housekeeper and was well known for her “Sweet Tea” and homemade yeast rolls. Ann and Roger loved to travel. They put on a lot of miles through the years, enjoying the sights of the country and always returned with great stories of their adventures.

A celebration of Ann’s life will be held at the Assembly of God Church in Westwood, on December 4 at 1:00 p.m.

The family is forever grateful to the Long-Term Care staff at Seneca Long-Term Care. The care, compassion, love, and professionalism shown for our Mom (and for us) throughout her stay at Seneca will never be forgotten.

The family requests that in lieu of flowers that donations be made to: Seneca Long-Term Care Activities, P.O. Box 1814, Chester, CA 96020, Attn: Long-Term Care.