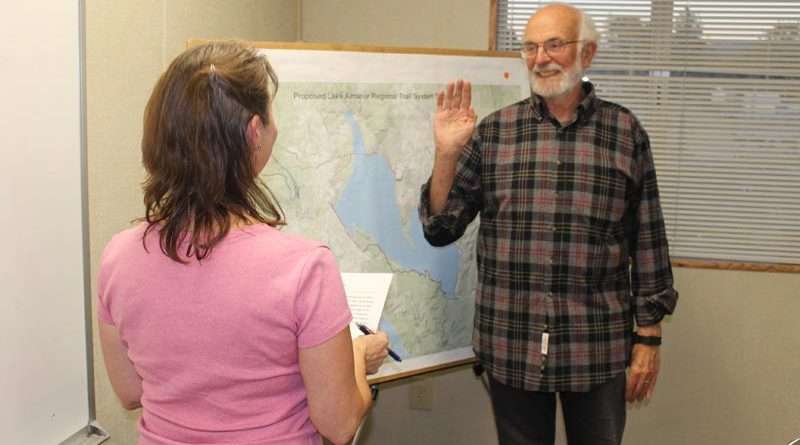 The Almanor Recreation and Park District Board of Directors met Oct. 14 to cover the monthly meeting agenda.

During the regular meeting, board Secretary Heather Patchen administered the oath of office to Charles Plopper, filling one of two vacant board seats.

Volunteer Trails Coordinator Carlos Espana brought the board up to date on the progress of the California Department of Parks and Recreation, Office of Grants and Local Services (OGALS), on its Per Capita grant process, available under Proposition 68, the California Drought, Water, Parks, Climate, Coastal Protection, and Outdoor Access for All Act of 2018.

Funds are available to special park districts for local park rehabilitation, recreational development and improvements on a per capita basis as defined by OGALS.

Once the complicated application process is completed, a potential grant of up to $200,000 will be available.

Since Chester is not a severely disadvantaged community a 20 percent matching fund is required from the ARPD in the amount of $40,000.

This matching money has been generously provided by the Collins Pine Foundation and can be used for environmental and design work to plan needed recreational facilities on ARPD property.

Due to OGALS grant-imposed time constraints, possible environmental restrictions, and a requirement to pay contractors “prevailing wages,” the OGALS grant monies may not stretch as far as desired, said Espana.

At this time, anticipated projects include a covered picnic area, a community garden, roadway improvements and a children’s playground; all ADA compliant.

Espana said the Per Capita Grant process is in limbo until a final written Guideline is prepared by OGALS and made available to interested parties.

If ARPD meets the requirements in the final Guideline, the next part of the process includes identifying eligible projects to develop within the district’s 3-acre parcel.

As a prerequisite to the grant process, Espana noted that the board needed to vote on a resolution confirming that the district will comply with the Per Capita Grant’s many terms and conditions before a Nov. 1 deadline.

Without the final Guideline, he said that the official filing dates for submission of other documentation has been delayed, with a new date to be announced later by OGALS.

He said that this would give the board more time to pre-prepare designs and cost estimates for the project proposals they hope to be funded.

Espana said the granting agency also had the right to survey and inspect the rec district property for compliance of grant terms and conditions at any time before, during and after projects were completed.

Susan Espana, board treasurer, made a motion to approve resolution 2019-05, dated Oct. 14, approving the application for the Per Capita Grant funds. The motion was carried unanimously.

Before he left the meeting, Carlos Espana took a few minutes to share with the board a number of CAD renderings generated at Truckee Meadows Community College depicting a master plan of possible future placement of recreational facilities once financing was obtained.

It included a skate park, pickle ball courts, a pump track, restroom and other possible installations such as a covered picnic pavilion and a small children’s playground.

Susan Espana reported to the directors from the prepared Cash Reconciliation Report summary for the month ending Sept. 30.

She said that the rec district had $44,244.79 in its Operating Cash Account, $9,472.23 remaining in its Capital Improvements Fund account, and $50,000 held for the potential OGALS grant account, another $10,818.33 in reserves, plus additional. monies for a total of $115,035.35 cash-on-hand, earmarked for next year’s programs and to pay ancillary costs and overhead expenses like office supplies and wages, equipment, insurance, utilities, repairs, rental fees, sponsorships, sports field maintenance and supplies.

“Given our current cash reserves, the budget indicates that we will operate at a negative cash flow of approximately $5,000,” said Espana.

An expected audit could push this to negative $10,000 she added.

It was also noted that approximately $2,000 in repairs were needed to fix recently vandalized equipment and the removal of graffiti.

Wade said he might want to hand over the running of the event to another board member and instead take on a different program next year.

The board discussed the increase in soccer coach discounts over last year and will look into possibly modifying the program for next year.

Director Shane Bergmann felt it was in the interests of the ARPD to initiate a public relations campaign through a number of media outlets, to help the public understand the actual costs of operating the district.

He related how there have been some instances where feedback by community members suggested they erroneously underestimated how much money was required to operate the unfunded rec district in a responsible and effective manner.

The district relies on volunteers to keep the costs of sponsoring events down and in other endeavors, he noted.

For example, for years now field maintenance supervisor Dan Smith has contributed a great deal of his time and effort at no charge to the district to keep the sports fields mowed and maintained.

A lengthy discussion was held between newly appointed director Plopper and the rest of the board members on the possibility of installing a series of solar panels to save the district on electricity costs over the long run.

Plopper, who stated he had contacts in the solar energy industry, offered to help with calculations regarding installing solar panels on the roof of a potential covered picnic building.

After an exchange of ideas on how a solar electrical system might be implemented within the district, Plopper determined that he could provide more details on such a system, including a cost estimate after measurements were taken and he had a chance to consult with his solar business associates.

The board of directors agreed to hold off discussing the new district bylaws and instead to table the discussion until the following monthly meeting.

The next regular board meeting will be held Nov. 11 at the ARPD office building located at 101 Meadowbrook Loop in Chester.

For information on programs and other questions call 258-2562 on Tuesdays and Thursdays, from 9 a.m. to 2 p.m. The office is closed every third Thursday of the month. Email: [email protected]