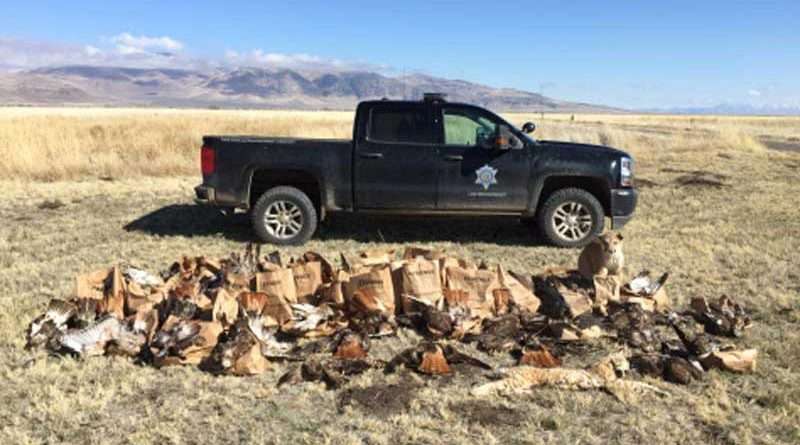 Investigators from the California Department of Fish and Wildlife collected the carcasses of nearly 150 raptors and other creatures on Richard Parker’s ranch near Standish last year. File photos
News
April 24, 2019April 24, 2019 Staff

On Friday, April 12, the California Department of Fish and Wildlife announced Parker had pleaded guilty to crimes associated with poaching more than 150 raptors and other wildlife on his rural Lassen County property. He was sentenced to 90 days in jail, given a $75,000 fine and five years summary probation.

According to the court, a five-year jail sentence was suspended in the case.

About $20,000 of Parker’s fine will go to the Lassen County Fish and Game Commission, funded by a portion of Fish and Wildlife fines collected in Lassen County.

CDFW’s Patrick Foy, one of the investigators in the case, said he was happy with the outcome.

“Everybody came out with what we thought was a fair conclusion,” Foy said. “The local (fish and wildlife) squad up there is really exceptional. They’re credited with putting this thing together. And an anonymous tip really set the whole thing in motion.”

According to a statement announcing Parker’s arrest in March 2018, “Each potential violation is a misdemeanor poaching crime at the state level, with maximum penalties of six months in jail and up to a $5,000 fine per each raptor. An unlawfully taken mountain lion could result in up to a $10,000 penalty. Each potential federal crime could result in additional penalties.”

Foy said he was not aware of any federal charges filed against Parker at this point.

While some in Lassen County believe Parker’s sentence was too lenient, Foy said, “It’s very rare to get a jail sentence for a poaching case. And in this particular case, 90 days was significant. We felt like that was a fair disposition.”

Probation terms include full search authority, prohibitions on possessing firearms, hunting and fishing and a requirement to obey all laws. The two firearms used during the commission of the crimes were ordered destroyed by the court.

“We are pleased to work with the California Attorney General’s Office, as well as CDFW’s Office of General Counsel, to put this egregious poacher out of business,” said David Bess, CDFW Deputy Director and Chief of the Law Enforcement Division. “The case came together as a result of collaboration of our local wildlife officers and laboratory and wildlife biology staff from the state and federal governments.”

“Poaching is not a game, it’s a serious crime,” said Attorney General Xavier Becerra. “Richard Parker willfully and egregiously disregarded California law to kill protected wildlife, including hawks. To anyone who breaks our laws for illegal sport, know that we will prosecute and hold you accountable.”

In March 2018, wildlife officers assigned to Lassen County received an anonymous tip from someone who reportedly witnessed a man killing a hawk near the town of Standish. The wildlife officer conducted covert surveillance of the suspect, then visited the private property and discovered nine dead raptors.

The entire Lassen/Plumas County Wildlife Officer squad later returned to the property with a search warrant. A search of the home and 80-acre property turned up more than 150 carcasses of protected birds and other wildlife in various states of decay, along with spent rifle casings. Most of the birds were red-tailed hawks, but several other species of hawks, other nongame birds and an owl were found. Four of the birds were migratory ferruginous hawks, which are uncommon in the area. Officers also located two dead bobcats and one taxidermied mountain lion, all of which were suspected to be unlawfully taken.

A CDFW wildlife veterinarian and avian specialist analyzed the first nine carcasses collected. However, investigators sent the majority of the carcasses to the U.S. Fish and Wildlife Service Forensics Laboratory in Ashland, Oregon, where wildlife forensic scientists meticulously necropsied 159 samples to determine cause of death. The 400-page necropsy report significantly contributed to the deputy attorney general’s ability to effectively prosecute the case.

CDFW also expresses appreciation to Lassen County District Attorney Melyssah Rios for her contribution to the monumental effort put forth to bring this case to closure, but Rios did not prosecute the case.

Anyone who believes they are witness to unlawful poaching or pollution activity is encouraged to call CalTIP, CDFW’s confidential secret witness program, at (888) 334-2258 or send a text with the tip411 app. Both methods allow the public to provide wildlife officers with factual information to assist with investigations. Callers may remain anonymous if desired, and a reward can result from successful capture and prosecution.