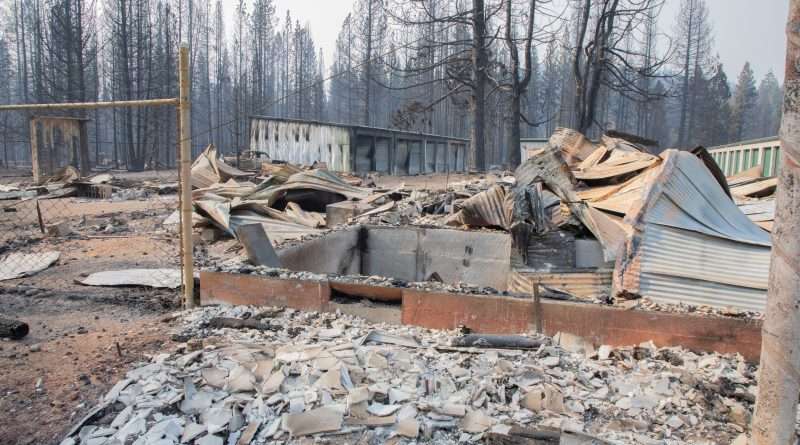 The fire ripped through the storage units in Canyon Dam on Aug. 5, leaving one side virtually unscathed. Photo by Shawndra West
News
August 11, 2021August 13, 2021 Editor

Editor’s note: This is the a.m. briefing for Wednesday, Aug. 11. The Dixie Fire is now over 500,000 acres and burning in four counties. While the incident management team has tried to provide the public with as much information as possible, the community briefings seem to always leave the public wanting more specificity. Plumas News has asked if the team could assemble a list of all of the communities (in printed form) impacted in Plumas County that could be updated as circumstances change. The team is considering it.

Now for the latest: The Dixie Fire is 501,008 acres and 30 percent contained. A total of 1,045 structures have been destroyed and another 69 damaged. To date, no members of the public are missing or hurt, but three firefighters are reported as injured (the original number had been four).

From this morning’s official update:

Fire remained active overnight due to minimal humidity recovery. Heavy smoke conditions reduced visibility in the fire area. High pressure continues to build over the incident and will be the dominant feature with predicted thunderstorms moving in this week. Forecasted winds will be southwest at 16 mph with a 15 percent cloud cover today. Crews will continue to construct direct and indirect line to secure the fire perimeter, construct contingency lines in both zones, and provide structure defense in communities at risk.

But here is some more specificity from last night’s briefing.

Operations Section Chief Mark Brunton said that the Butte sector (including where the fire originally broke out through the western flank of the fire into Tehama County) looks good. A lot of work is being put into the Tehama County portion in the community of Mill Creek, to keep the fire from spreading west and/or hooking around to the north. Firing operations are nearly complete in the Mill Creek area to lock off that portion. According to Brunton, if that fire were to take off it could be “catastrophic” for Tehama County.

As for some specific Plumas County areas:

Chester: This community was impacted mostly on the periphery. As the fire was coming through, firefighters “did a really good job saving the community. There are still a lot of resources in there to deal with spots and drop hazard trees, with significant progress in the past couple of days. Cal Fire is working with law enforcement and infrastructure partners to facilitate people moving back in, and within the next 24 to 36 hours more details will be released.

Hamilton Branch: This area is on the zone boundary of East/West zone and is “looking really good.” Firefighters from the two zones are working together to put in containment and contingency lines.

West Shore: Mop up continues along the Highway 89 corridor, where smoldering continues.

Moving forward, though the current weather has helped crews make progress in building lines and completing structure prep, the forecast is concerning as thunderstorms are predicted to bring the potential of increased winds and lightning. If the fire were to be pushed by winds, it has the potential to impact the Peninsula, the east part of the lake and Westwood. “We want to provide the most amount of resources that we can,” in those areas.

Additionally, a part of the fire is moving in the easterly direction along A21, and the management team is trying to put resources there as well.

And finally, in the Warner Valley area, the fire has moved down hill and into the valley.

Hotshot crews completed securing the perimeter at Silver Lake and the burn out at Rush Creek. The entire southern perimeter is holding within its containment lines and is continually patrolled.

In the Hunt Canyon area, containment lines down to Keddie Point were built and fire continued to hold.

Direct line was implemented north of China Gulch and the fire is holding on the Lone Rock landscape.