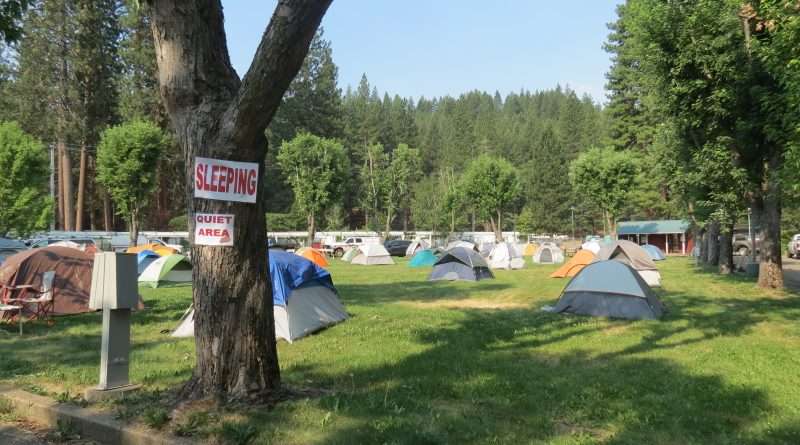 Firefighters get some much needed rest at the Plumas-Sierra County fairgrounds the morning of Aug. 1 under a rare site for many Plumas County residents in recent days — blue skies. Photo by Debra Moore
News
August 2, 2021August 4, 2021 Editor

A number of evacuation orders and warnings were lifted yesterday afternoon, allowing fire weary residents across Plumas County to return home. But Indian Valley residents who returned home received a scare last night. The fire spotted above Round Valley and though crews were able to get around the new start, it was a reminder that the situation remains dangerous.

Sheriff Todd Johns drove to the area last evening as he heard the reports and reminded residents that they need to remain vigilant and be prepared to leave again if necessary. The entire valley remains under an evacuation warning. Resident Ken Donnell who has been providing regular updates on the status of Indian Valley asks his fellow residents to stay off the roads to allow clear access for firefighters.

This morning the Dixie Fire stands at 248,820 acres and is 35 percent contained. The latest numbers for structures destroyed and damaged are 45 and 22.

In addition to Indian Valley the fire continues to challenge firefighters above Meadow Valley, where mandatory evacuation orders remain in place, as well as in the Rush Creek Road area of the Feather River Canyon.

Fire behavior is expected to increase due to drying conditions as fire continues to move toward control lines burning unburned interior islands and ridges. No big weather changes are forecast for Monday and Tuesday as southwest winds continue across the region. Seasonable highs in the 90s with humidity to around 15 percent and some areas of smoke today. Crews will continue to mop up, conduct fuel reduction operations, and tactical patrol. All damage inspections are 100 percent complete for this portion of the incident.

Overnight on the East Zone, firefighters monitored fire lines while burning out pockets of unburned fuels. The primary focus was on Dark Ravine and the Round Valley Lake area where spot fires were discovered late yesterday afternoon. Crews spent the night in Bucks Lake Wilderness putting in direct and indirect lines and patrolling.

Crews on the Evans Fire worked to secure established fire lines while allowing the thick brush and heavy fuels on the interior to burn out.

The Rush Creek area is a critical concern. Firefighters are working to prevent spread of fire to the north. In coordination with the West Zone, indirect and contingency lines are being constructed using a combination of dozer and hand line. Firefighters will be mopping up much of the perimeter of the East Zone. Firefighters and equipment are working throughout the area. Firefighters ask that drivers are respectful and drive with safety in mind as they return to the area. 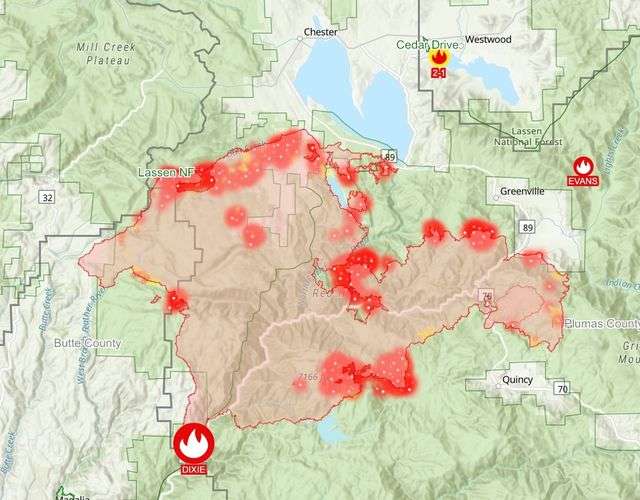