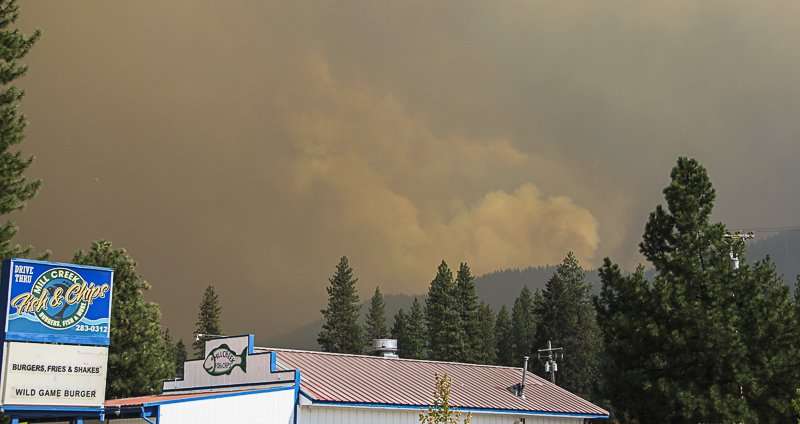 The smoke arises behind Mill Creek Fish and Chips in East Quincy. Some residents in East Quincy have been evacuated. Others are on advisory. Photo by Roni Java
News
August 20, 2020August 21, 2020 Editor

During tonight’s Forest Service briefing, it was reported that seven more engines and more aircraft have arrived to fight the Claremont and other fires in the area.

East Quincy residents who are part of the mandatory evacuation are arriving at Quincy High School, friends’ homes and even parking lots as they left their homes. According to the Plumas County Sheriff’s Office, Quincy High School is full and the Red Cross is working on opening another site.

The evacuation order has been updated to include all residents in the east Quincy area south of Highway 70 east of Mill Creek (to include Mill Creek Road and Forest View) extending east to Quincy La Porte Road. Evacuations have been completed by law enforcement conducting door-to-door evacuations.

UPDATE: 5 p.m. Aug. 20: Several helicopters are dropping water on the Claremont Fire as it continues to push east.

An evacuation center has been established at Quincy High School.

“With the afternoon winds picking up once again and being as unpredictable as they have been creating substantial fire behavior,” he encourages everyone in the greater Quincy area, especially those living in East Quincy, “to be packed and prepared for a possible mandatory evacuation. “If members of the Search and Rescue squad or law enforcement ask you to evacuate please cooperate and follow their instructions,” he said.

With limited resources, due to the number of fires burning across the state, fighting the Claremont Fire has relied heavily on the air attack, but the heavy smoke is making that difficult.

A fire advisory, with no evacuation orders, has been issued for the East Quincy area south of Lee Road, east of Cemetery Hill, and both sides of Highway 70 from Cemetery Hill to Lee Summit.

UPDATE 2:55 p.m. Aug. 20: A countywide page has been issued to all fire departments throughout Plumas County to send an engine to La Porte Road to help provide structure protection.

The Claremont Fire, burning in the Middle Fork of the Feather River south of Quincy, was originally reported at 4 p.m. Aug. 17, the result of a lightning strike. Last night the fire was estimated at 1,500 acres, and though it’s been reported that there was significant growth overnight, no new figures were available as of 9:15 a.m. this morning.

During its morning update, the incident command team reported that staffing is an issue, but firefighters are working to contain the fire and protect structures. The fire moved closer to La Porte Road, as well as moved toward the Feather River drainage.

The fire is in the steep, difficult terrain of the Middle Fork drainage. Uphill runs and rolling material, along with gusty winds, combine to create difficult conditions for control attempts.

As of this morning, a California Interagency Incident Management Team 1 has assumed command of the North Complex, which includes the Bear, Claremont and Sheep Fires. This morning’s briefing can be viewed on the Plumas National Forest Facebook page: https://www.facebook.com/USFSPlumas/videos/629475291106560/