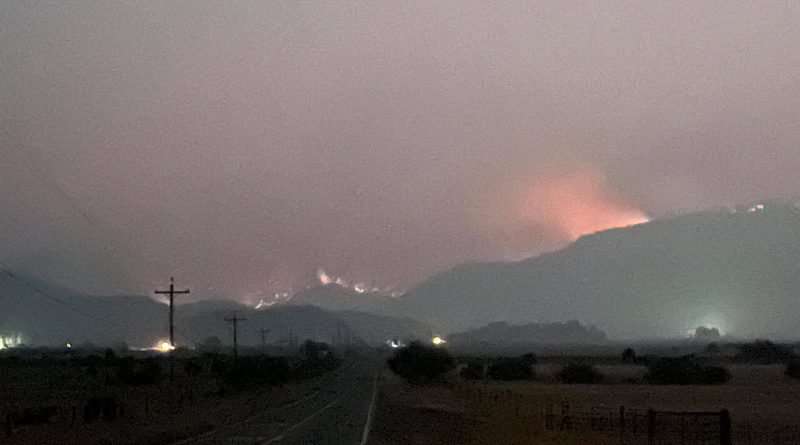 A view of the fire overnight take from the corner of Highway 89 and Stampfli Lane in Indian Valley. Photo by Shannon Phillips
News
August 21, 2021August 21, 2021 Editor

UPDATE: This story was updated to remove information regarding the Meadow Valley Fire Department. The crew protected Genesee during the Walker Fire, not the Dixie.

It’s been one month and eight days since the Dixie Fire broke out July 13 at the base of the Feather River Canyon. Last night, nearly 40 days after this fire started, more people were forced from their homes under a mandatory evacuation order. To say that residents are exhausted would be a gross understatement. Patience is strained. The latest map is shown below and it’s mind boggling to see the bottom of the map where it all began and how it has morphed across the landscape.

This morning the fire is 714,219 acres and it’s 36 percent contained. It’s burned through and out of Plumas County and into Lassen, Tehama and Shasta counties, but it’s not done with Plumas yet. It started in Butte County, but that area has been contained for quite some time now.

The wind change yesterday brought portions of the fire to life — particularly in the Genesee area — where the fire spotted across Genesee Valley Road. All available resources spent the night providing structure protection.

Elsewhere on the East Zone of the fire, the spot fire that emerged two days ago was driven by intense winds and grew despite repeated retardant drops. The spot fire is inaccessible for firefighters to construct direct line. Dozers, feller bunchers, and masticators are working to construct and reinforce indirect lines on Grizzly Ridge. This is the area of the fire that could threaten East Quincy .

All lines at Keddie Point and into the North Arm of Indian Valley are holding.

Dozer lines have been completed around Dyer Mountain to protect Westwood and the Peninsula.

Near Janesville and Milford, fire lines are holding.

A red flag warning is in place today until 6 p.m. with southwest winds that could threaten containment lines. Winds are expected to calm tomorrow.

On the West Zone

As of today, the Dixie Fire has burned 44,858 acres of land within Lassen Volcanic National Park. The fire has been burning in the park since Aug. 4. Thus far, visitor favorite Bumpass Hell has survived the Dixie Fire. And the recently reconstructed boardwalk is still intact, despite rumors to the contrary.

Slightly higher humidity overnight limited fire activity somewhat and though active fire was observed, it did not challenge control lines as much as during the day yesterday.

More details will be provided as they become available throughout the day. 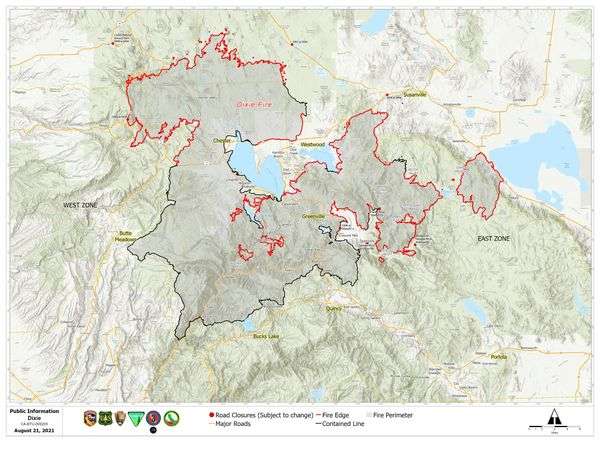