The view of the fire coming over the top of the mountain above East Quincy rattles nerves. Photo by Victoria Metcalf
News
August 22, 2020August 23, 2020 Editor

UPDATE 7:45 p.m.: Plumas County Sheriff Todd Johns said that the fire that spotted over Highway 70 at the Massack rest area is now moving to the north and up the ridge. He said that for now the Chandler Road and Greenhorn areas aren’t being impacted.

UPDATE 7 p.m.: The CHP reports that all westbound traffic on Highway 70 is being stopped in Blairsden. Only residents with identification corresponding to addresses in non mandatory evacuation areas can continue west.

UPDATE: 6 p.m.: The Claremont Fire has spotted over Highway 70. The spot fire is approximately 5 acres. As reported earlier in a separate entry, Highway 70 is now closed between La Porte Road and Quincy.

UPDATE 11 a.m.: The Forest Service just issued a revised update. The Claremont Fire is at 11,310 acres.

UPDATE 10:30 a.m.: According to the morning briefing, the Claremont Fire continues to spread east towards the Highway 70 corridor, but fire crews worked through the night to hold the fire to the west side of the highway. Active structure protection took place last night in East Quincy, where 30 engines and other heavy equipment worked to slow spread and limit structure loss. Firefighting objectives for crews today are to keep the fire from crossing the Highway 70 corridor. The team is working to secure additional resources from other contained fires in the region. Thus far only one outbuilding has been reported to have burned in the Claremont Fire.

Dry conditions are expected to continue over the region today, with gusty winds possible this afternoon into early evening. Humidity is expected to start picking up along with cooler temperatures providing some relief. Smoke and widespread air quality impacts from the wildfires remains the primary weather concern into Sunday. There is a possibility of dry lightning in the eastern Sierra and western Nevada from Sunday night into early next week.

Editor’s note: We wish we could provide more timely morning briefings for you, but there has been a delay in getting the latest information from incident command for the past few days. The public information officials are aware of the situation and said it should improve in coming days.

We are still awaiting the overnight news on the Claremont Fire, but here’s what we do know. All previous mandatory and advisory evacuations remain in place. Highway 70 remains open, but that could change depend on the fire’s trajectory today. See Sherriff’s attachment below.

The Claremont Fire, burning in the Middle Fork of the Feather River south of Quincy, was originally reported at 4 p.m. Aug. 17, the result of a lightning strike. As of last evening the fire had reached 6,392 acres.

Public information for the Claremont-Bear-North Complex fires is 530-316-4489. 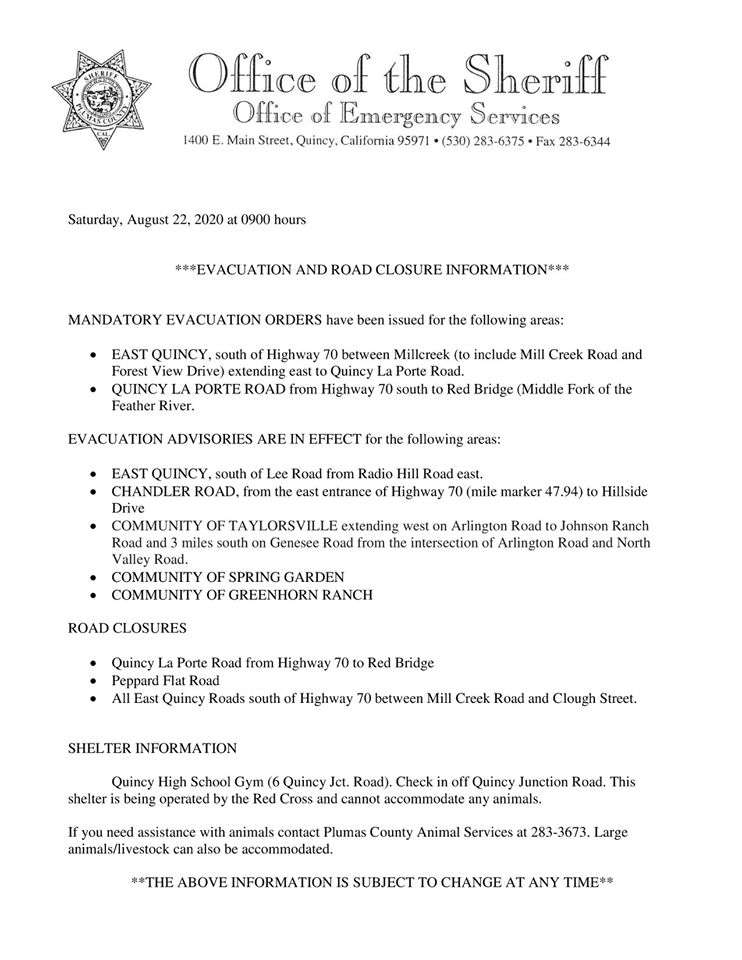