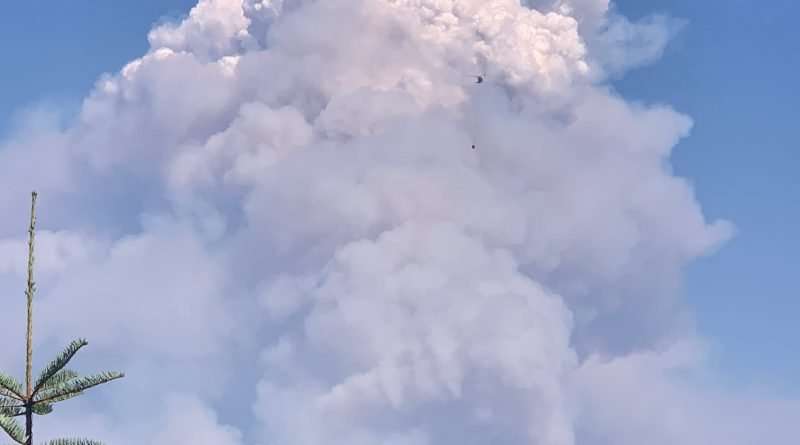 They have become a familiar sight during the Dixie Fire — but what happens when a smoke column collapses? Photo submitted
News
August 29, 2021August 31, 2021 Editor

The predicted increased winds did materialize today and fire behavior did increase in a very visible way.  The column from the Grizzly/Walker spot fire was visible throughout much of Plumas and Lassen Counties.  Citizens from Quincy to Greenhorn and Sloat were understandably on edge.

The good news was that the problems across the entire fire were limited and even the Grizzly/Walker spot fire, while it did advance toward Mt Ingalls and put up a very impressive smoke column, stayed on the north side of Grizzly Ridge.

Firefighters were able to make some progress extending and strengthening line farther down the Grizzly Ridge. They were able to use air-tankers to reinforce the fire lines, something the lingering smoke had prevented for the past few days.

So far, so good.  But it is definitely a race against time extending the line far enough down the Grizzly Ridge.  The goal is to build enough line out the ridge, getting far enough ahead of the fire, that they can turn the fire line to the north and herd the fire back into the Walker Fire scar.  If that can be done, the fire will have very limited fuel to burn so it will burn much more slowly and with less intensity.

The winds are supposed to blow from a more southerly direction tomorrow.  Firefighters are hoping that will turn the fire so that it spreads more to the north and less to the east, helping them buy time to get their line built out in front of it.

For now, the fire remains north of Grizzly Ridge. It is directly north of Greenhorn Ranch.  If the fire does not cross the ridge, the communities along Highway 70 will be fine.  The winds will be stronger over the next couple days, but as long as they blow out of the southwest, there is a good chance of keeping the fire from crossing the ridge.

On the north end, the fire in Shasta County was active but stayed within the fire lines.  Crews continued to build contingency lines and prepare for structure protection in the Hat Creek and Old Station areas.  These communities do not appear to be in immediate danger as the fire is still several miles away and the winds should continue to push the fire to the east, away from these communities.

In Lassen County it was a little different situation.  The fire has burned out of the Caribou Wilderness and has crossed the primary containment lines according to Operations Section Chief Mike Wink.  He said crews are working hard to contain the fire within the contingency lines but acknowledged there is a real risk the fire may cross those lines as well.

Satellite imagery appears to show a line of fire extending up a road system from Silver Lake to the north.  This appears to be a back fire that was probably lit to slow down the advance of the fire burning east out of the wilderness area.   The Lassen County Sheriff has a new evacuation warning for the area of Bogard, Blacks Mountain, and Harvey Mountain south of Ashurst Lake.

The news was actually pretty good for the rest of the fire.  The lines were tested by stronger winds.  And they held up.  Usually the stronger winds will stir up any heat sources that have been lying dormant.  It’s just like blowing on your campfire to get it going.  And today, only a few smokes sprang to life.  Most were well inside the fire lines and the few that were close were easily handled by the fire crews.

It’s far from over, but for large portions of the fire, it is looking better.

What is the story with those satellite heat maps?

Lots of us are learning how to access internet resources to help us keep up with information on the wildfires.  There are Facebook pages, websites, blogs and even some very high tech satellite images of the fires.  These satellite images are available from a number of different sources.  They all depend on data from NASA satellites but they each process and present the data a little differently.

The satellite identifies “heat anomalies” or heat signatures and is able to locate those heat signatures on the ground with pretty impressive accuracy, usually within 300 feet.  The data is sent to earth several times a day from different satellites.  It is usually processed and available to the public in about three hours.

There are some limitations to this data. The identification of just what qualifies as a heat source, and where it is located on the ground, all depend on some very fancy mathematical models.  While they are most impressive, they sometimes make mistakes.  False positives data points are fairly common and can be very misleading, particularly for the casual user.

A false positive can occur for a variety of reasons.  Sometimes a hot metal roof can look a little like a hot spot from space.  Sometimes burning material carried up in a smoke column can throw the location calculations off, especially when the satellite is looking at an angle rather than straight down.  An intense fire with a very large column will show lots of heat signatures that were from the column and not on the ground.  These usually produce a sort of “down wind” pattern beyond the real fire perimeter.  And sometimes there are heat signatures that are just head scratchers with no obvious explanation.

If a hot spot on a map looks out of place, it’s good to check some other sources before pulling the fire alarm.

There are different sources of satellite heat maps, but they all rely on the same data.  So checking another satellite map may not help.  A better idea is to check an “official” fire map.  The agencies combine satellite data with infrared data from aircraft and ground-truthing.  These maps are generally much more accurate even if you have to wait a little longer to get them.  Another approach is to just wait a few hours.  A false positive that shows up in the morning may not show up in the afternoon.  Several of the map sources let you click on the hot spot for additional information including the time the data was acquired.  If it’s not on the more recent map, chances are it never really happened.

Maybe its like any other information on the internet.  Take it with a grain of salt and check other sources  before you come to a conclusion.