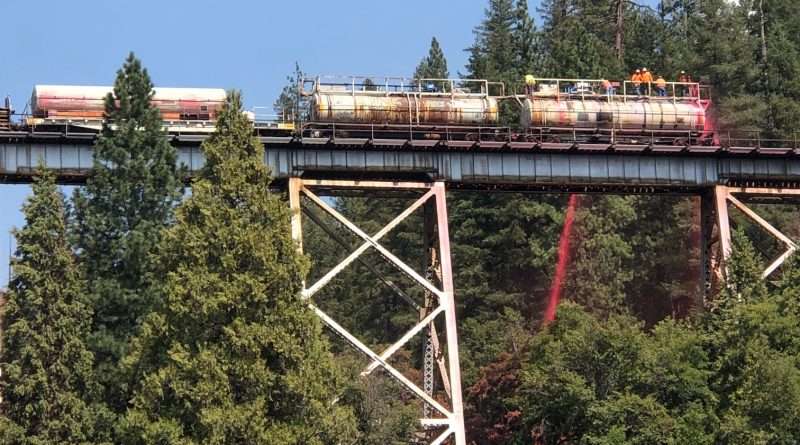 Everyone is pitching in to stop the spread of the Dixie Fire. Here crews spew retardant under the train trestle behind Chandler Road in Quincy. Photo by Katie Reid
News
August 30, 2021August 31, 2021 Editor

The Dixie Fire is evolving into two separate and distinct fires, one along Grizzly Ridge in Plumas County and the other on the north end of the fire, straddling the Lassen and Shasta County lines north of Lassen Volcanic National Park.  These two areas present some real challenges and still pose threats to communities.   But the fact that the rest of the fire is cooling down and much less active allows fire managers to move resources and focus their attention where it’s needed the most.  That is not to say these other areas can be ignored, especially with the stronger winds blowing across the entire region today.

Fire crews continued to build and strengthen the fire line on the ridge over night and plan to continue that work today.  Their objective is to get out in front (to the east) of the fire and hook their line back north into the Walker Fire scar before the fire can reach Lake Davis.  It is basically a race and so far firefighters are winning.  They need help from the wind and should get a little of that today.  The strong winds don’t help, but the wind direction should shift a little more to a south to north direction limiting fire spread to the east.

To the north, in Lassen County the fire burning out of the Caribou Wilderness remains a concern.  Crews had constructed direct lines on the fire, but the fire has escaped those lines and burning towards the contingency lines.

Fire crews have been backfiring that contingency line to improve their chances of holding the fire there.  The firing operation runs along Forest Road 10 beginning on the north shore of Silver Lake and moving north to Cinder Lake and Black Butte, encompassing an area of about 8,000 acres.

Even though it is intended to increase the chances of the contingency line holding, this firing operation is not without risk.  The area is exposed to the north wind and the relatively flat terrain is less than ideal.  Firefighters usually prefer to backfire from a ridge allowing the fire they light to back down hill into the main fire.

Despite the challenges, the firing operation has been successful so far.

On the remainder of the fire, the name of the game is patrol and mop up.   The challenge is to find and extinguish those hot spots before the wind can bring them to life and carry embers across the fire lines. Even though the fire and flames have really settled down, there are smoldering logs and stump holes that hold heat throughout the over 771,000 acres of the Dixie Fire.  That is a lot of area to patrol.

The Janesville and Milford area will be of particular concern because there are still a few hot spots left over from the large spot fire that threatened those communities several days ago.  This area is also well known to firefighters to the strong and erratic winds that blow off of the escarpment.  It is not uncommon for these winds to produce extreme fire behavior.

Fire crews are also working to the west of the Janesville and Milford area building contingency lines in case the fire burning near Dixie Ridge should continue its easterly spread, burning through or around the Walker Fire scar.

Winds are forecast to blow from the west and southwest again today but these winds will be stronger than yesterday with gusts ranging from 25 to 35 mph over ridges and exposed areas.  The fire will be very active this afternoon with extreme fire behavior likely. 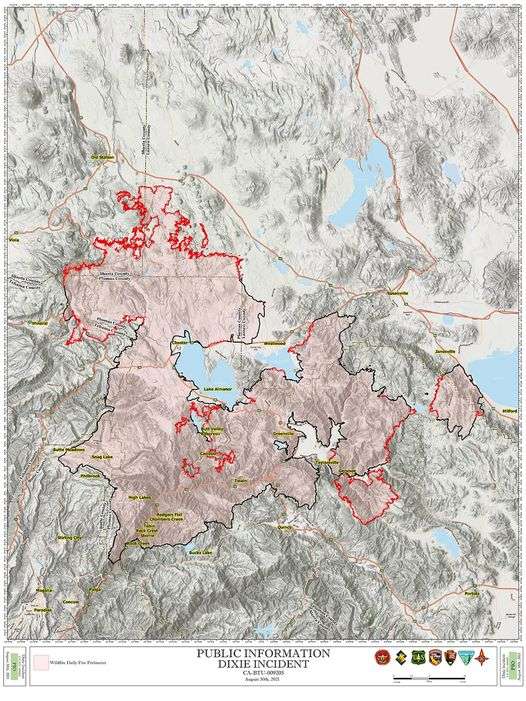